Why Shift from Bins to Carts? 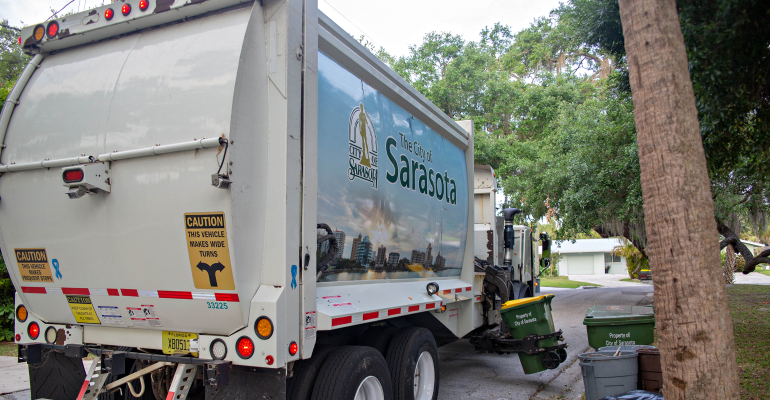 Shortly after Waste Management chose not to extend the City of Sarasota Fla.’s recycling contract a couple of years ago, the municipality decided to take on collections itself rather than hire another contractor, and it made another change at the same. It transitioned from a two-bin system to single stream and opted to go with 65-gallon carts over two 16-gallon bins.

Public Works rolled out 15,000 carts in a month, completing the process one week before the official start of collections.

It has taken money and a focus on education to make the program work, and the city turned to nonprofit, The Recycling Partnership who provided almost $106,000 in grant money to help pay for the carts and educational materials such as flyers and mailers. The Recycling Partnership assisted with logistics and worked with the city on a recycling campaign: Be Cart Smart, to educate residents on what they can put in their carts and telling them that this change would simplify the process.

“It was a challenge to move from the two-bin system to single stream carts. The Recycling Partnership helped that transition run smoothly,” says Todd Kucharski, general manager, Public Works Department, City of Sarasota.

On April 1, 2019, when the first pick up happened, the city and the residents were ready.

People had the option of keeping their old bins to fill with recycling they could then transport to their new carts. Or they could put the empty bins at the curb to be taken away by the city.  The vendor who supplied the carts credited Sarasota for the old bins, which were ultimately recycled into new product.

The new system has been working fine, actually better, according to Kucharski.

“A lot of residents were not recycling with the two-bin system, and now with bigger carts they are.

I think part of the challenge with bins is they are open at the top and you get rain inside; also, they’re small. But the cart has a lid so materials can be protected, and you can put more in them. Plus, you can wheel them to the curb,” he says.

As far as contamination rates, at 16.6% in late January 2020, they were down from before the transition, though there are no hard data to quantify.

“There’s incentive on both sides –for the city and contractor – to get recycling done right to take advantage of opportunities for revenue. And our revenue has gone up since the April 2019 roll out  [$143,508 from April 2019 to January 2021],” Kurcharski notes.

The uptick in recovery was almost immediate, with residents becoming more engaged in recycling. Now almost two years later participation is “outstanding,” he says with 75 to 90% participation throughout the city when prior it was as low as 50% in some areas. Even with COVID-19 with people at home and a spike in waste, they are recycling right, he says.

The city uses “oops” stickers to flag carts containing unacceptable items. But it’s been issuing fewer of them since early on.

The first month was challenging, with residents complaining when they found a tag on their cart. But they got the message when city commissioners explained the reason for them and when haulers made one-on-one visits to personalize communication.

At the start of the program, Sarasota’s Public Works staff went to neighborhood association meetings to engage residents in what they call the recycling game to make learning how to do it right fun.

“We brought different objects and asked where they should go. We brought recycling and garbage carts and a separate cart for what didn’t belong in either trash or recycling. We wanted to be sure they understood not to put in materials like batteries or a bottle of bleach or  diapers. They enjoyed being engaged rather than just having a formal presentation,” Kurcharski says.

Education and communication are ongoing. The people of Sarasota continue to receive informational flyers in their utility bills. And if the city starts to see a rise in contamination of specific materials staff include that in their messaging. But they point out more than how to, and how not to, recycle. After the city’s most recent recycling audit, it shared outcomes with the community, thanking them for their help keeping contamination low.

“I think they liked getting information and hearing that they were appreciated. It’s about transparency, so they appreciated us letting them know that their materials are getting properly recycled,” Kurcharski says.

Sarasota is one of several cities that The Recycling Partnership has provided with technical assistance and funding to transition from bins to carts. The nonprofit has awarded 48 grants supporting this endeavor, sometimes with one grant funding multiple cities in a given state. The Recycling Partnership is funded by organizations across the supply chain: brands, retail, reclaimers, and mills.

Its relationship with cities extends for at least four years after the transition to carts.

“We partner to make sure everything is on track and to provide support as they tackle challenges to ensure materials collected are of a high quality,” says Rob Taylor, director of Grants and Community Development for The Recycling Partnership.

He says on average the cities it works with see increased capture rates of 125 pounds per household per year.

The Recycling Partnership’s grants for infrastructure story began about six years ago with the goal to increase supply of recyclables and feedstock to be made into new products.

“We did research to see how cities were performing around the country, and those collecting the most had carts. It’s case by case, but in aggregate across the country there is an increase in material people want,” Taylor says.

Transitioning to carts necessitates at least some degree of automation of collections, notes Cody Marshall, chief community strategy officer for The Recycling Partnership. Some communities transition to fully automated sideloading, and others continue with their semiautomated rear packers.

Marshall points out a Midwest city that stepped up automation when its investment in carts became part of a larger project to modernize its entire recycling system.

Sheboygan, Wisc. had been using plastic bags to collect recyclables, which became a source of contamination for the materials recovery facilities as they can’t process the bags.

“With bag-based systems, people jump off the truck and throw the bags in the back. But you can collect carts with an arm. So, through this roll out they addressed the contamination issue and decreased manual labor, and were able to roll out a more efficient collection service,” Marshall says.

This past year, The Recycling Partnership made a different kind of move to try and further advance recycling and a circular economy.

“We put in a requirement (to the vendors we get carts from) that they use five percent curbside-recycled content. We’re excited about that and we hope to see success there,” Marshall says.

“Putting recycled content in carts is supportive of end-use demand for what we collect. Recycling is not just about collecting. We also want to make sure what is collected goes back into the products that we use every day.”