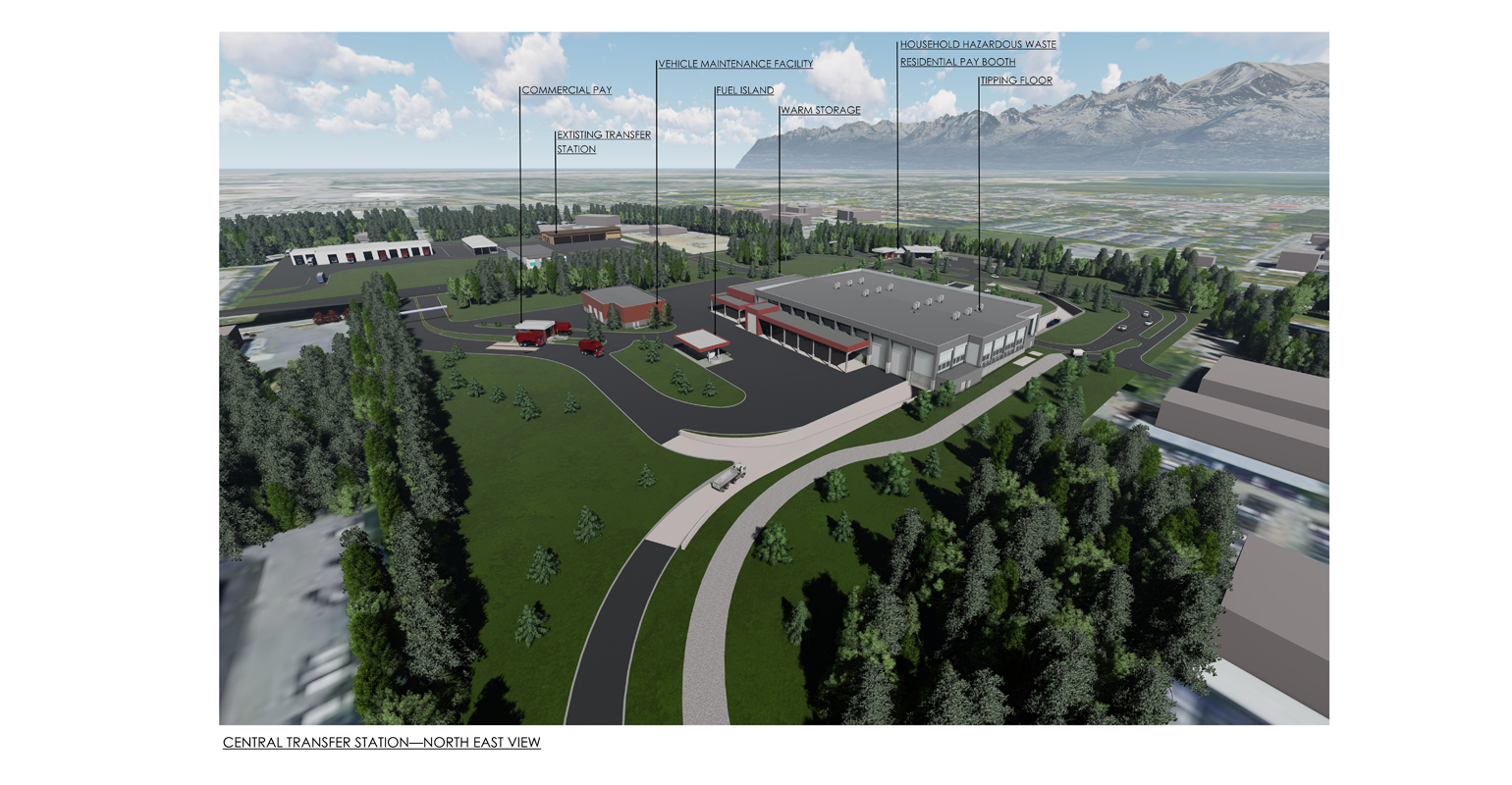 Anchorage, Alaska is building a $120 million transfer station and upgrading its existing one, which is the largest project in the history of its Solid Waste Services department. It will extend the life of the municipality’s landfill by 20 years.

Slated for completion in late 2022 or early 2023, the six-building project includes three joined structures to house the tip floor, administrative operations, and warm storage. The other three buildings are for household hazardous waste operations, vehicle maintenance, and the scale house.

In all its 40-plus years, the transfer station has received only a minor boost, and that renovation was in 1987.

“We could not do large-scale yard waste and organics diversion and we were doing no recycling.  Recycling went to a private operator. Now the plan is to convert the existing tip floor into a recycling facility to deal with tires, yard waste, food scraps, and inert municipal solid waste,” he says.

Besides the waste operations, there will be an “engineering on display” area with a glass overlook so the public can watch real-life tipping floor activity, and there will be displays and a video to further illustrate the operations.

The project is being done as a construction manager at-risk design project, with support from a contracted construction manager, Davis Constructors and Engineers, in order to expedite scheduling and contain project costs. It is also a design-build project.

“By doing as a design-build [vs. design, bid, build] and working with a contracted construction manager we can evaluate as we design and decide what options are the cheapest. Historically in doing as a design-build, we have seen savings and an acceleration of scheduling,” says Chris Coleman, Tetra Tech project manager.

Coleman says local support from Davis and another Anchorage company, DOWL, who is doing civil design and public outreach is proving helpful.

The major project will be funded through increases in collection and disposal rates of 5% a year and 6.25% per year, respectively, over five years.

“The department had not raised disposal fees in 10 years or collection in five years and our rates have been half of what our neighbors pay. We should still be lower than neighboring entities after the five-year incremental increase,” says Spafford.

Construction has already begun on what will be a two-and-a-half-year endeavor. Two key factors are driving that long timeframe: harsh winters and the magnitude of the project that will sit on 27 acres.

“We are talking about six buildings to span over 133,000 square feet. There have been complexities, for instance the existing tipping floor is open to the outdoors and prone to windborne debris and odor,” says Coleman, adding that the overall traffic flow was not good, and the old station is small and overcrowded with long wait times. On weekends up to 1,000 customers just from the residential side would come to drop off trash.

Among answers to these issues has been an enclosed building to mitigate smell and debris. There will be a physical separation between the entry point for residents and for commercial customers. And the spatial positioning of buildings will enable residents to more easily get to the household hazardous waste site on the way to the tipping floor.

Traffic on and off the site was one of the biggest initial challenges.

“This project is in the middle of a congested urban area. It was like putting a jigsaw puzzle together to figure out how to best orient the buildings for good vehicular traffic flow. The second challenge is subgrade. There are about 60,000 to 80,000 cubic yards of peat moss that we are having to remove,” says Coleman.

Some existing gravel is being repurposed as structural fill. Anchorage’s Solid Waste Services is also looking at recycled glass for road material, among other options for sustainability.

“We want to make this project as sustainable and as close to carbon neutral as possible. So, we are also looking at solar and other renewables to power the building,” says Spafford.
Solar would likely supplement the electrical demands for some of the buildings while the department is also considering  a combined heat and power (CHP) system to provide electricity generated from gas. Waste heat produced by the CHP units will supplement building requirements, primarily to heat the floors in the winter to prevent ice formation.

What’s most unique, at least from Coleman’s view, is that this project has garnered, and will continue to garner, community interest and engagement.

Citizens are kept informed through a website showing different stages of construction, including via fly-through aerial videos.

The engineering on display area is another feature with the community in mind, Coleman says.

“The display area will be big enough to host school groups to educate about diversion and show what happens on the tipping floor.  We’ve also oriented the administrative building to take advantage of the view associated with the mountains.

We have taken each of these steps because we want people to come in and for this to be a nice place for them as well as for employees,” says Coleman.

Spafford anticipates this facility will mean even more to the community from another perspective:

“This transfer station means our disposal system will be taken care of for the next 30 to 40 years, and it will extend the life of our landfill another 20 years. Also, the people want more recycling, and this facility will give them that,” he says.