HomeCollection & TransferPost-Florence Cleanup: What to Do with Trash, Recycling, Storm Debris
Recent
Machinex Upgrades West County Resource Recovery in California
May 27, 2022
EREF Hosts Record-Breaking Charitable Auction, Proceeds Directly Support Scholarships and Scientific Research
May 27, 2022
This Week in Waste: Top Stories May 23 - May 28
May 27, 2022
Landfill Emissions Measurement: What We Know, What We Need to Know
May 27, 2022
POLL
SWANA & Oceans Caucus Foundation Host Congressional Briefing on Recycling
May 27, 2022
Collaboration Leads the Way in Connecticut to New Extended Producer Responsibility Law for Management of Discarded Residential Gas Cylinders
May 27, 2022
An Uber-Style Service for Curbside Recycling
May 26, 2022
S&B Selected as Contractor for New Hope Energy’s Advanced Plastics Recycling Unit
May 26, 2022

Post-Florence Cleanup: What to Do with Trash, Recycling, Storm Debris 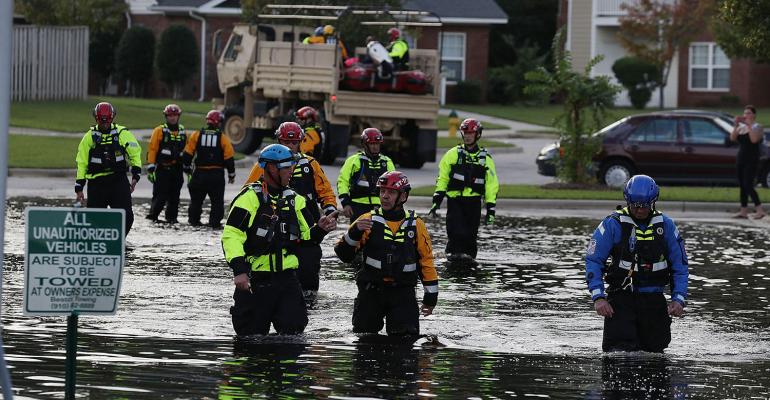 Even as the remnants of Hurricane Florence pulled away from the Carolinas earlier this week, residents and businesses in both North and South Carolina are continuing to struggle through the aftermath of the storm.

Florence dumped record-breaking rainfall throughout the Carolinas, which produced devastating floods in the area. According to an AccuWeather report, the highest amount of rainfall—35.93 inches—was recorded near Elizabethtown, N.C. In addition, Florence dumped nearly 2 feet of rain in Wilmington, N.C. The storm has led to at least 32 deaths and hundreds of water rescues, according to the report.

Related: Five Ways to Gear Up for Hurricane Season

And storms like this can have a lingering effect on the waste and recycling industry in devastated areas. Here’s a look at what some solid waste and recycling companies are doing to help communities recover, as well as some post-storm tips they are offering.

The Republic Services team is working hard to support the communities affected by Hurricane Florence. As recovery efforts get underway, Republic offers the following tips to help with trash collection, recycling and removal of storm debris.

Republic also noted it is in the process of resuming regular residential and commercial collection services in the impacted areas. For updates about waste and recycling collection schedules, visit Republic's website or the company's My Resource app for iOS or Android.

For additional details and a visual guide to preparing storm debris for pickup, refer to the company’s debris removal guidelines.

At the start of hurricane season, Waste Management released some useful storm preparation tips for before and after a major storm. Once a storm has passed, there are a number of things that can be done to ensure the smooth resumption of trash and recycling collection services.

"Disasters can generate several years' worth of a community's solid waste in just a few days, which can easily overwhelm any local solid waste removal operation," said Ray Hatch, Quest's CEO, in a statement. "Quest's rapid deployment solution provides effective emergency response relief to businesses dealing with the aftermath of a national disaster."

Waste Pro of Florida also released hurricane preparedness and sanitation service tips for before, during and after a storm. Here are a few post-storm tips the company released: