Regional haulers outmaneuver the national waste and recycling behemoths by staying nimble, responsive and attuned to the demands of local customers.

The national waste and recycling companies, due to their sheer size and reach, tend to loom large on the industry landscape. But for a business that is locally driven in so many respects, regional waste haulers remain a vibrant part of the waste and recycling industry while facing their own particular challenges and mining unique opportunities.

In what follows, four regional haulers discuss how they have carved out their own roles in the waste and recycling industry.

“So while we’re a small regional player, we’re dominant in our field,” says Hill. “By doing so, we have the feel of a big company and get quality and volume that people need through us and can give to our vendors, so we can keep our prices down. We are large enough that we can compete with the big boys but we have the benefit of giving the hometown customer service.”

One of the advantages a smaller hauler has, says Hill, is the ability to make decisions quickly without a lot of layers of approval. Also, a regional hauler can more deftly tailor a solution to a problem. He cites the example of a customer who needed an excavator to load large crates. Hill was able to easily procure it from another location.

“We got a $200,000-a-year account by being able to quickly customize the services to the needs of the community,” he says.

Hill also sees a growing concern within local communities that money companies make in the town stays in the town, rather than going to a corporate office elsewhere. “It builds the community we live in and serve. From that standpoint we have more community support for being local as opposed to a national company.”

Oklahoma specifically has very low disposal rates, and that can be both good and bad, Hill says. While the lower tipping fees keep American Waste’s costs down, it also makes for lower profitability if you own the landfills.

If the company became national, Hill says he’d like to believe it wouldn’t operate differently, “but as a company grows it does become more impersonal.”

Hill believes there can be a stronger role for the regional hauler in the future.

“I think people are a little tired of technology; if they’re upset they want a live body to talk to,” he says.  “If it’s your neighbor, if you don’t treat them right, they’re going to look you eye to eye.”

But he does fear for the future prospects facing regional companies. “The only way for the biggest companies to grow is to absorb these guys,” Hill says.  “They go find a great regional guy and they buy him.  I think they’re becoming extinct.

Brokers also have changed the market. Those companies can behave and compete like a national company even though they may never have hauled trash.

And Houston-based Waste Management Inc.’s recent purchase of Greenstar Recycling poses a direct national threat to American Waste, which just launched a new material recovery facility (MRF). Greenstar was competition, but now, they bring in the much larger parent Waste Management as a competitor.

It’s hard for a complex national enterprise to be in tune with the differences and nuances of a local market, says John Casella, chairman and CEO of the Rutland, Vt.-based Casella Waste Systems Inc.

“We can be a little closer to the market place and have a better understanding of what that market place is looking for,” he says. “We can respond to it more quickly.”

Casella Waste serves the northeast United States, and Casella sees a lot of unique needs for that region. “The Northeast is really highly developed from an environmental and resource sustainability ethic,” he says. “The type of demands we have from our customers in the Northeast are really around resource solutions and environmental sustainability, maybe more so than other parts of the country.” 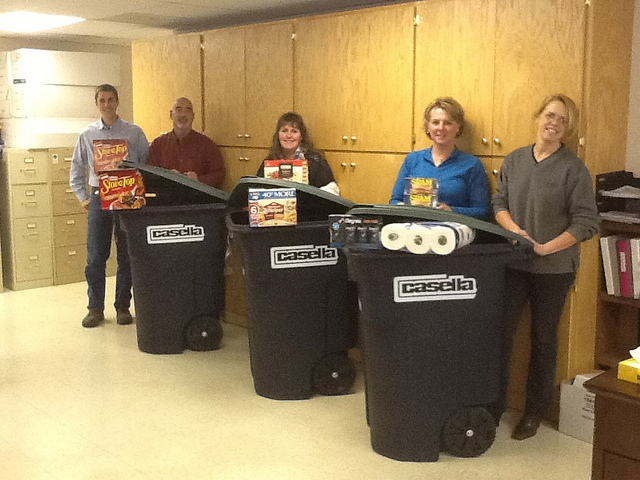 That is particularly true with the colleges and universities in the region, as well as the municipal segment.

The challenges for the regional hauler are the limitations or scale of resources or capital. “Sometimes, size matters,” he says.

Also, a regional hauler is, unsurprisingly, more vulnerable to regional economic conditions.  “The Northeast has not had the growth of other areas like the Southeast or out West,” he says. “That’s a challenge. When you’re in one region of the country you don’t have the offset, where you can see much more robust recovery of housing markets in other parts of the country.”

Casella believes his company wouldn’t be much different philosophically, though, if it were a national concern. “We’d be looking to empower local managers to drive their business models. I think each of those markets are separate markets and they need to be driven by a local management team that has the autonomy and the authority to make the decisions to serve the customer base.”

Because of that, Casella believes the regional hauler isn’t going to disappear from the waste and recycling industry. “I think it is and always will be a local business,” he says. “I think that’s the future for the industry particularly with the level of transformation that’s going on in the industry right now, as it relates to the utilization of the waste stream either as a feedstock from a manufacturing standpoint or for the nutrient or energy value of the waste stream.”

He points to organics as the next big transformation stage, as the industry increasingly pursues its nutrients as a resource and its potential to boost diversion rates.

“I think the regional firms are the best of both worlds – having the expertise in resources of a larger firm and the ability to remain nimble and close to the needs and demands of local markets and local customers.”

For Michael Sangiacomo, president and CEO of San Francisco-based Recology Inc., the differences are not so much small hauler vs. large hauler as publicly held vs. privately held.

“Having to report quarterly to the world what you’re doing, how you’re doing,  the pressures of having to constantly increase earnings and justifying why you’re not – that’s not our game,” he says. “If we had to do that we’d have to run the business very differently than we do. That would create some issues in being who we are. For us, we’re better off not being that way.” 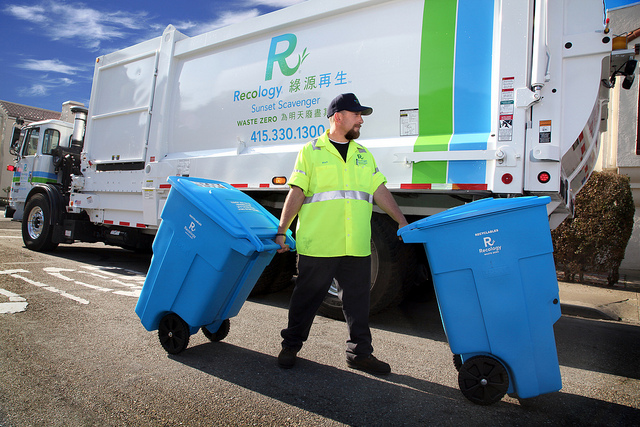 The San Francisco market may be the most environmentally conscious region in the United States, which is huge factor in making Recology a much more diversion-oriented waste and recycling company. “Environmentally and politically we are definitely left of spectrum,” says Sangiacomo. “The world out here thinks a little differently. That’s why being employee owned and a local company works for us, because of who we’re providing services to.

“Our business has been not necessarily ‘How do we maximize profitability?’ but ‘How do we make sure we’re doing what communities want so we’re here for the longer term?’ I think there’s a nuance of difference there.”

But Sangiacomo acknowledges that being national and public does have its advantages, primarily tied to financial resources. “National haulers are large owners of infrastructure-type assets like landfills that are much harder to own if you don’t have the kind of resources.”

Recology basically serves three states on the west coast: California, Oregon and Washington. It emphasizes avoiding a cookie-cutter approach to customer problems. Sangiacomo believes Recology is able to do that with its smaller size and proximity to customers.

Sangiacomo is bullish on the future for regional haulers. “We’re not going away; we expect to be here for a long time,” he says. “So long as we can be creative in finding ways to deal with the resources we’re collecting and finding how we can improve the way there’s a tremendous opportunity for companies that think that way and can do those types of things for their communities.”

The waste and recycling industry retains a core of regional haulers, many family run, that he believes will remain committed to the industry for the foreseeable future.

“As we keep reinventing what we do with the so-called waste stream and put a lot of it to a better use rather than just disposing of it, I think that creates a lot of opportunities for companies that aren’t locked into infrastructure that the big guys have.”

One of those family owned regional haulers is Cincinnati-based Rumpke Consolidated Companies Inc. At Rumpke, 75 of the company’s 2,400 employees are Rumpke family that have grown up in the communities the firm serves, points out Matt Bauer, director of sales and marketing for the company.

That hometown family mentality has helped Rumpke develop a culture of consistency and longevity. “The person the customer spoke to yesterday typically will be the same person you talk to today,” Bauer says.

Rumpke also has built its customer base around its facilities “to maximize our efficiencies and our overall profitability,” he says. As the business is more local, having regional capacity helps position a local hauler. 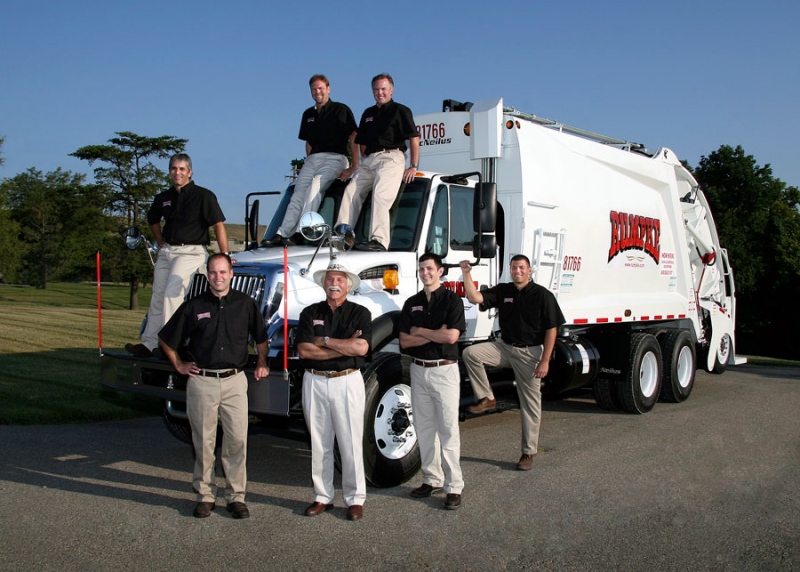 The company’s consistency can frustrate some staff at times. “At Rumpke we’re a little conservative,” Bauer says. “But candidly I think it serves us well. We place a huge emphasis on proven technology before we promote a service.”

With Rumpke’s strong base in Ohio it has been able to take advantage of the political climate. “There’s been huge support in Ohio for renewable energy projects, and that’s enabled us to invest in gas recovery systems in Ohio and Kentucky,” Bauer says.

Ohio also has been supportive of recycling, and that’s aided Rumpke in becoming a recycling leader in the state with 10 facilities. “The shift definitely is going more toward recycling, and we think we’re in a good position to take advantage of that shift,” he says.

The state also has offset some of the costs of Rumpke’s development of its compressed natural gas (CNG) stations and fleet.

Bauer sees a strong place in the industry for regionals. “We’re pretty proud to be an Ohio-based firm, to serve the people in our region with service solutions. We look forward to doing it for years to come.”

He knows the larger national companies will continue to pursue acquisitions of the smaller regionals as a characteristic of the industry.

“But I think there also will be a pride factor in the mid-level companies that will allow themselves to stay in marketplace,” he says. “Markets are regional. I think you’ll find a good mix of people for a long time to come.”