Going Green for the Gold

The London Olympics strive to be the greenest games in history.

This summer, as the world’s elite athletes descended on London to compete in front of a global audience, the United Kingdom also had an opportunity to showcase its progress as a leader in sustainability. For the U.K. government, which has long supported efforts to draw attention to the dangers of global warming and bolster green initiatives,the 2012 Olympic Games offered a platform to demonstrate its commitment to sustainability. For instance, the London 2012 Games will reuse almost 100 percent of demolition waste, send zero waste to the landfill and its venues will use 30 to 40 percent less drinkable water than standard.

The effort to manage waste responsibly began with London’s bid for the Olympics back in 2003. “Our vision is to use the power of the Games to inspire lasting change,” says David Stubbs, head of sustainability efforts for the 2012 Olympic Games, who has held that position since 2003. “For six weeks in the summer of 2012, the eyes of the world will be on London. But for seven years before, and for many years afterwards, we will have changed and will be changing the way we impact on people, industry and the planet.” 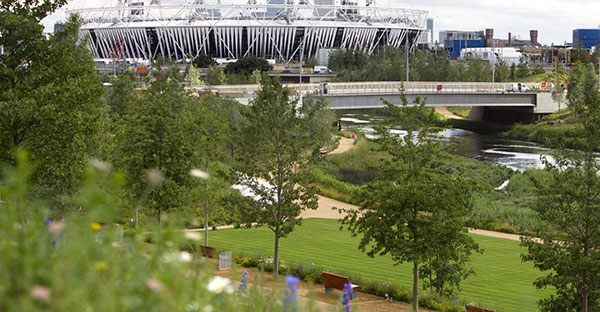 According to Stubbs, the Games’ biggest achievement in sustainability was the transformation of Olympic Park itself. The park is located on 500 acres of former industrial land in East London, which Stubbs says was “polluted, contaminated and in dire need of regeneration.” London’s Olympic Delivery Authority (ODA) spent six years demolishing and rebuilding the site, and a final year creating naturally appealing places such as rolling meadows and forests. 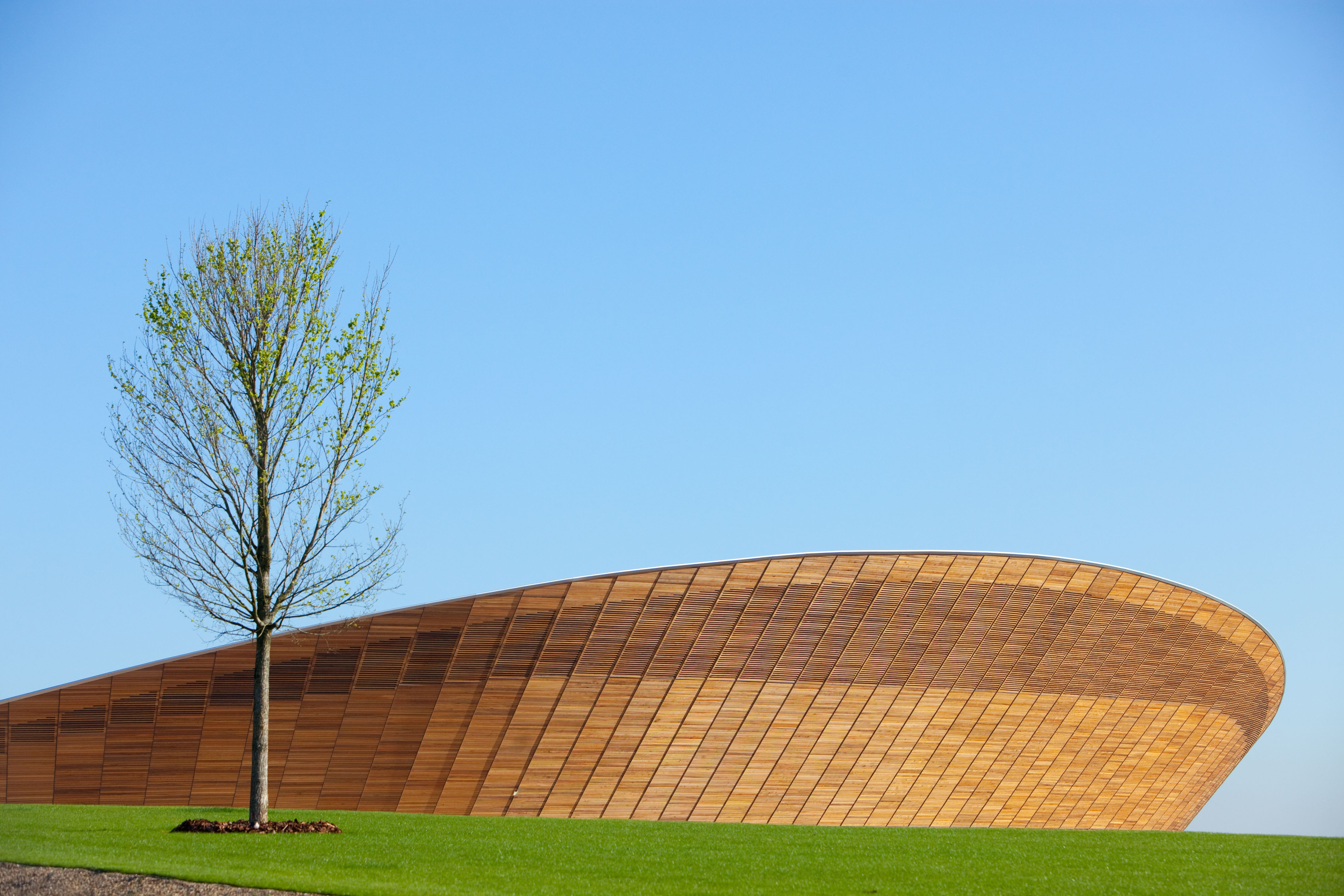 The soil was so contaminated that a bioremediation plant and soil washing machines were brought to the site to clean nearly 2 million tons of contaminated soil. A 30-foot rubbish pit was cleaned out and refilled with clean soil, eventually becoming the site of the velodrome that hosts the London Games’ cycling events.

Throughout the demolition process, the goal was to reuse 90 percent of demolition waste, but ODA achieved 98.5 percent reuse. Materials from existing buildings such as processed concrete, cobbles, yellow stock bricks and broken roof tiles were reclaimed and used in the new athletic facilities and landscaping. For instance, reclaimed yellow stock bricks and sandstone were used for paving, building rubble found new life in the foundations of new buildings, and broken roof tiles were used to create habitats for invertebrates in the site’s natural areas.

During construction, ODA met its goals for reclaiming and reusing construction debris by providing a park-wide waste management framework and requiring all contractors to use it; implementing an on-site waste consolidation center to maximize opportunities for recycling; offering incentives for contractors to maximize segregation at the source to make subsequent reuse or recycling easier; and implementing a strategy that facilitated the reuse of construction materials between project teams and local community and arts projects.

From the beginning, the London Olympic Organizing Committee wanted to use the Games to regenerate East London, not temporarily but for the long term. “We didn’t want to build facilities that had no plan for legacy use,” Stubbs says. “So everything was planned with an eye toward the future.”

For instance, there was an emphasis on temporary structures. At the aquatic facility, temporary seating was installed for spectators during the Games so it could be removed, leaving a smaller, more useful permanent venue. The Basketball Arena, which held 12,000 people during the Games, was a temporary facility, always intended to be dismantled after the Games. Temporary structures were also used for the mountain biking course and equestrian events, among others.

The structures that are not temporary came with a plan for permanent usage. For instance, at Olympic Village and Paralympic Village, more than 2,000 residential units were constructed to house athletes during the Games. After the completion of the Games, the Village will be transformed into a mixed tenure residential neighborhood, incorporating a range of affordable housing options.

The LOCOG worked to arrange agreements with new operators to take over the management and operations of each permanent venue to ensure the ongoing use of the Olympic facilities. A regional park authority will take over the use of the velodrome, which will become VeloPark, and Eton Manor, which will become the Lea Valley Hockey and Tennis Center. Other operators have taken on the Aquatics Center, the Multi-Use Arena and other facilities, and a private company has taken on the contract for the estates and facilities management of the park.

“London has set the benchmark for using the Games as a catalyst for regeneration,” says Andrew Altman, CEO of London Legacy Development Corporation, which oversaw the process of planning for future usage of Olympic facilities.

In addition to ensuring that Olympic facilities would have a future use, the Olympic Committee also worked to provide the infrastructure that would make the Games run smoothly, as well as other potential events and uses. “There is a new wastewater treatment plant, new bridges, and other infrastructure that was designed to future-proof the site for later,” Stubbs says.

Aside from planning for the future of the Olympic site and facilities, LOCOG also made specific plans for materials that would be left over when temporary structures were dismantled and souvenir shops were closed. “Having such a big focus on sustainability means we need to be sure about what happens after the Olympics,” Stubbs says. “We don’t want to end up with a lot of rubbish.” Some items will be sold as memorabilia, others will be donated to organizations in need, and others will be reused in other capacities.

London was the first host city to publish an all-embracing zero waste vision for its Games. To meet its goal of sending zero waste to landfills, London 2012 devised a complex strategy that included food packaging regulations, a system of waste and recycling containers, communication and signage, and the identification of reprocessing options and markets. According to Stubbs, the committee viewed all waste as a potential resource, a view that governed their policies of finding ways to reuse, recycle and compost every item possible.

The Committee instituted stringent regulations for foodservice providers, and all catering operations and foodservice companies agreed to the regulations, including McDonald’s and Coca-Cola. One of the regulations required all foodservice businesses to use the same packaging vendor, so there were only a few basic types of food waste materials located on site. Each type of material was color-coded with matching waste bins to help consumers return their waste to the correct bins. For instance, polyethylene terephthalate (PET) plastic bottles were marked with orange lines and were disposed of in orange bins, which were transported to a PET reprocessing facility in northern England. “Coca-Cola bottles used and disposed of early in the Olympics will be transformed into new bottles by the time of the Paralympic Games, six weeks later,” Stubbs says. “All the PET plastic [goes] to the same place and [is] made into new products; it’s a closed-end process.”

That type of closed loop solution was what the organizing committee had in mind when it set a goal of sending zero waste to landfills. In addition to seeking such solutions, organizers worked with partners to develop tools, public education and outreach initiatives to promote low-waste lifestyles. They established “a dedicated line” for waste, Stubbs says, sending all waste to one processing facility. At that nearby facility, every recyclable item is extracted and other waste is reused or composted.

While organizers aim to send zero waste to landfills from “closed” venues, or those venues operated by the London Olympics, there are also many situations in which Games-related waste is generated at “open” sites across the United Kingdom. For instance, the Committee could not control the types of materials entering the waste stream at sites like the road race routes, torch relays, official hotels, cultural events, transport hubs and approach routes to venues. In those cases, LOCOG worked with suppliers, partners and local authorities to encourage the alignment of waste management practices at open sites with those adopted for closed venues.

Nancy Mann Jackson is a contributing writer based in Florence, Ala.