If it were up to some people, what gets demolished in Las Vegas would get recycled in Las Vegas. But challenges of the market make that tough.

Las Vegas is famous for many things, including spectacular casino implosions and cutting-edge themed hotels and hotel rooms. Those all generate a unique volume of construction and demolition (C&D) debris.

But the last casino was imploded in 2007. Where C&D recycling is really happening in Las Vegas these days is in hotel renovation. “There’s always a couple thousand rooms being remodeled, from cosmetic to completely tearing down walls,” says Rob Dorinson, area director of recycling business development for Phoenix-based Republic Services Inc. 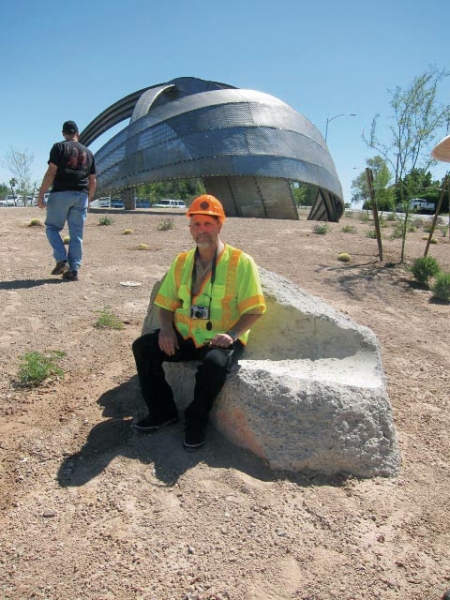 Dorinson has been involved with construction recycling in Las Vegas since 1997, when he founded Evergreen Recycling. Republic bought Evergreen in 2010.

Republic served as the recycling subcontractor for the Union Plaza Hotel remodeling that was just completed, and the company currently is working on the renovation of the MGM Grand and its 3,500 rooms. “Our model is to go in with the contractor and the owner and examine the waste stream at various points,” he says. “What’s the material?

What ‘s the end market? And what’s the most cost-effective way to get rid of or recycle the material, depending on their appetite for recycling and how much they want to do?”

With the old room material a lot of the strategy centers around reuse. Republic removed several thousand toilets from the MGM, for example. In many cases these commodes are donated to charity. But the MGM fixtures were crushed for use as a road construction supplement. “We were able to recycle the material and give them credit on the recycling side,” Dorinson says. “More importantly, we didn’t have to ship it anywhere, we didn’t take up any landfill space. It helped pave some roads. Those are the kind of creative solutions you get into on the [demolition] side that are not typical on the new construction material side.”

That’s one of the primary challenges for C&D recycling in Las Vegas – the local markets for materials are limited. Which is connected to the other big challenge: Recycled materials often have to be shipped long distances.

“Trucking costs drive everything up and tipping fees are relatively low there, so after a while it becomes unfeasible,” says Bill Turley, executive director of the Eola, Ill.-based Construction Materials Recycling Association. “So finding that local market can be a tremendous help to C&D recyclers in the Las Vegas area.”

Carpeting removed during a hotel renovation is a particularly challenging material to recycle. It’s very heavy and there’s a lot of it in Las Vegas hotels. The markets aren’t sufficient, so it becomes very expensive to recycle because it has to be shipped long distances, often to Phoenix or Los Angeles.

“The constant challenge with the hotel recycling is what the material is and how do we get it to market, “ Dorinson says. “Long distance is the nature of the market today. Las Vegas is an island.”

A River Runs Through It

Casino and hotel demolitions represent a bountiful one-time supply of material that can be recycled. One long-term, local-use application for that demolition material is the Las Vegas Wash erosion control project.

The Las Vegas Wash is the main discharge channel for the region and runs into nearby Lake Mead. “For the valley it’s very important that we keep it from eroding,” says Kenneth Colgate, civil engineer with the Southern Nevada Water Authority (SNWA) and the design engineer for the project, which began in 2000 and continues today.

The project was designed to create a 2,800-acre wetlands park preserve and control erosion. There is 280 feet of head (vertical height that the water drops from project end to end) to protect. The last imploded remains of old Vegas hotels like the Stardust and Frontier were part of the rescue. Protecting the banks of the Wash has all been done with hard riprap (rubble and other stone), revegetation and natural plant protection, Colgate says. 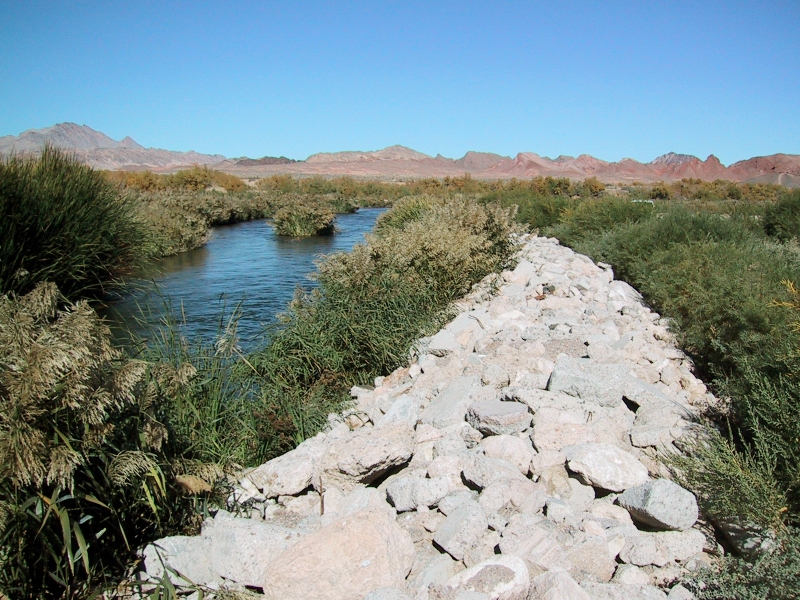 “The demolition of these casinos is a prime source that we can use. And it also relieves it from going to a landfill, which is a premium around here,” he adds.

But the SNWA can only use parts of the demolition rubble; specifically, the larger concrete blocks. They have to be at least 18 inches to six feet in size. The reinforcing steel rebar can’t be used, or the wallboard. Colgate estimates the project has taken about 10 percent of the total debris from past casino implosions.

The concrete also can be used for bank reinforcement but not for the weirs that manage water flow. Colgate says the SNWA uses denser natural stone for those vertical rock weirs.

To date the SNWA has used concrete from 14 casinos for the project. But the material isn’t restricted to casinos. It originated from any site that’s generated large pieces of concrete, such as highway and airport renovations. The SNWA has recycled material for the project from 26 sites in all, for a total volume of 200,000 cubic yards. Colgate says the SNWA actually has received a higher return on materials from the airport and roads because those demolitions were done with cutting rather than imploding, so the materials weren’t as broken up.

The project has been good for the environment as well as practical. “The water district is very strong on environmental sensitivity and recycling when you can,” Colgate says. “This project lends itself to using that.”

The other advantage is that it has solved a problem for two parties. Colgate says the SNWA would tell the operator of a casino about to be imploded that they’ll take the debris off their hands, so they don’t have to haul it or reduce it. And the SNWA gets the material for free. The casino operators were reluctant at first, in part because they thought the material separation was going to be hard. “It’s actually a pretty easy job,” he says. “Once they realized it was a cost savings they were good with it.”

The project, is winding down toward a completion date of 2015, so there’s not as much demand for the concrete, Colgate says. “If there was a place I’d love to use it, because it’s good material and keeps it from the landfill.”

Casino demolition material has found other local homes. Las Vegas’ Clark County hired three artists to design all the plantings and furniture, such as benches and shelter, for the Flamingo Arroyo Trail, which runs along the Flamingo Wash by the Flamingo Las Vegas Hotel. The artists discovered the availability of demolition material and used pieces of the Stardust in two of the trailheads, says Patrick Gaffey, cultural programs supervisor for Clark County.

The artists selected mostly identifiable pieces, such as swimming pool steps that had blue tiles attached, a column and some other items. Each trailhead with the casino demolition pieces included a plaque about the hotel and the debris. “They wanted a connection between the trail and the history of Las Vegas,” Gaffey says. 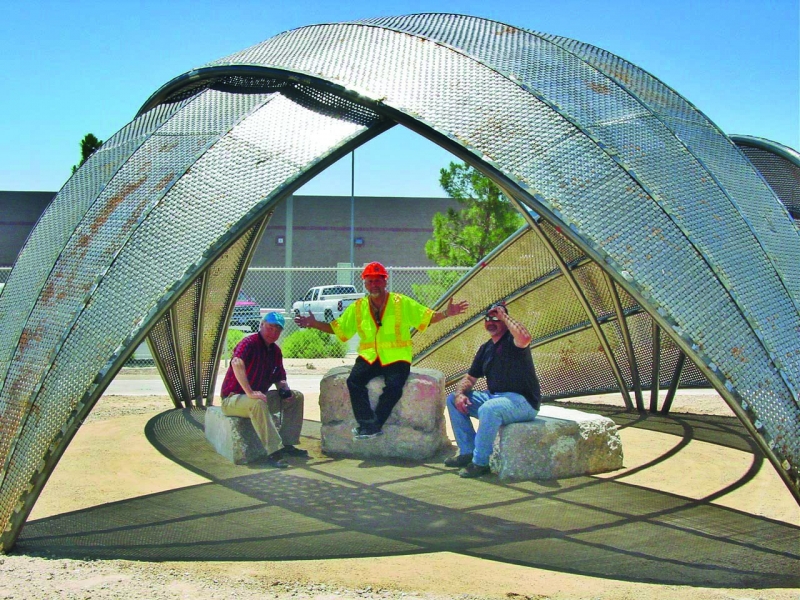 Before that big pile of debris is created with an implosion, a hotel has been cleared of its fixtures, doors, electrical systems, piping; it basically is a shell. Dorinson was involved with finding uses for some of those fixtures with the Aladdin Hotel, which was imploded in 1998. Evergreen found a market in Central America. “We’ve come up with some pretty ingenious things, I think.”

But that is another example of the challenges facing C&D recycling in Las Vegas. That Central American market isn’t an option any more, Dorinson says, because now they’re making that carpet and toilets themselves cheaper than it can be shipped. Working on a renovation at the Mirage Hotel a few years ago, Evergreen was able to piggyback shipping old wallpaper with some other plastics – another market that no longer exists. “The market is constantly fluctuating, that’s part of the challenge. You almost have to check it like a stock market price.”

Turley adds that he doesn’t believe the state of Nevada has been as aggressive as other states in helping to develop end-markets for C&D recycling.

New construction in Las Vegas has been big in past years, providing another recycling opportunity. Dorinson says Evergreen’s crowning achievement in new construction recycling was the City Center Las Vegas office complex, which achieved Leadership in Energy and Environmental Design (LEED) certification. Evergreen recycled several hundred thousand tons on the project and made 25,000 trips to its material recovery facility (MRF).

New construction waste streams are simpler than remodels – a lot of steel, concrete, cardboard, plastics. He says Evergreen asked the builders what materials were going into the construction. “We make sure we design our collection program to separate that material.”

But when the national housing bust occurred a few years ago, Las Vegas was one of the worst-hit cities. Turley says that seems to have impacted the demolition side of the business as well.

Whether it’s new construction, demolition or remodels, Las Vegas wants to recycle its C&D. “Most of the businesses want to be green, do the right thing; it’s good for their images,” Turley says. “I don’t think it would be as prevalent if it wasn’t for the green markets, because of the challenges.”

But Dorinson says it depends on how motivated the company is, because there is a cost attached. Republic tries to make projects as cost-effective as possible, pushing to combine easily-recycled material like cardboard with the more difficult and costly items such as carpeting. “You tell us how much you are willing to pay,” he says to customers.

Colgate believes recycling is smart business. “If I was a contractor I’d be recycling because that’s money in my pocket rather than hauling it away and dispose of it.”

Las Vegas per capita has one of the highest number of LEED-certified buildings in the United States, Dorinson says. Even with the area’s relatively low tipping fees many of the hotels have better recycling rates than the national average. “It’s really a credit to the hotels that they have these initiatives.” He adds that he sees that attitude starting to carry over into the local residential market.

Dorinson believes that trait of making recycling a priority reflects the character of the city. “With Las Vegas, part of its success is that it’s always responded to the needs of the customer. I think it really started with the convention industry. That’s part of hospitality. People want to stay at hotels that practice sustainability, including recycling.”