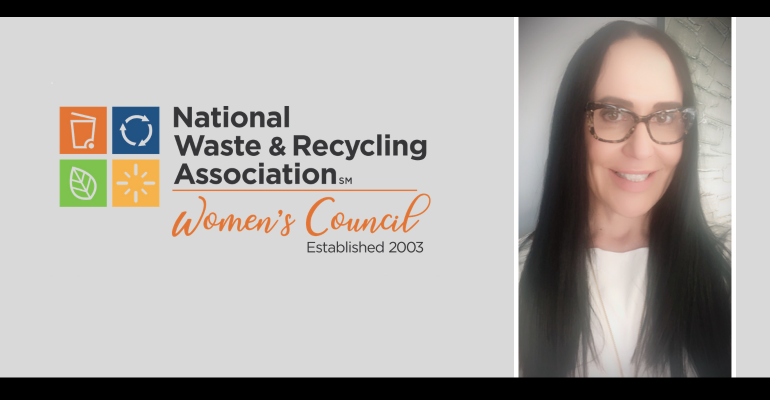 Holtzman has found her second family within the waste industry through her 26-year-career with Waste Connections and her involvement with the NWRA Women’s Council.

Little did Tammy Holtzman know that when she replied to a simple job posting in a newspaper advertisement, she would be taking the first step to a 26-year-career in a large industry that feels like a small-knit family.

Starting in the accounting department, Holtzman worked her way to an accounting manager position and three years later she was offered the district manager job of Waste Connections of Canada, where she has been ever since.

As district manager, Holtzman is responsible for her location which means wearing several hats, she said.

“The other thing I’m actually really proud of is that I am one of the very few females out of Waste Connections. There’s three of us in Canada and I think there might be one in the U.S.,” said Holtzman. “It’s a male dominated industry which we’d like to change over time, but you definitely have to have the right personality to fit.”

The servant leadership culture at Waste Connections means that anyone in a leadership position, formal or not, is expected to serve – serve the customers, serve the employees, serve the team.

“We’re really fortunate to have amazing teams and we really need to support them and serve them. It definitely helps with retaining employees. It keeps employees and their families engaged with us and know that we care,” said Holtzman.

She said that even if they’re going above and beyond or just doing the little things that show their employees, they are more than just a number it keeps them engaged and opens a dialogue.

In addition to going all-in with the servant leadership culture, Holtzman said that once she got to know the industry and the people, she was a “lifer.”

“In our industry we have amazing, humble people,” she said. In all iterations of her career, when she worked for BFI Canada and Progressive, “it’s still the same wonderful people. Waste Connections is definitely no different. It’s great. With the servant leadership style, it’s definitely changed things around here, the things we do differently like how involved we are in our communities and with our employees.”

After a period of time, Holtzman said it’s evolved from just being her “job.”

“I honestly can’t imagine working in any other industry,” she said.

To further immerse herself into the industry, Holtzman joined the National Waste & Recycling Association’s (NWRA) Women’s Council after attending its luncheon at WasteExpo 12 years ago.

“I stumbled upon one of their luncheons and thought, ‘oh I’m going to attend this and see what it’s all about.’ And I met a few other ladies there and found it very interesting, so I joined. And then they started sending out their notifications about events and I went to the annual meeting that year and I just couldn’t believe all the fantastic women [in the group] and I just dove in and haven’t looked back since,” she said.

When she first joined the Women’s Council, Holtzman was involved with a few committees and became the marketing and membership chair and then it evolved into serving as vice president and ultimately president of the Women’s Council. Holtzman is also a member of the scholarship committee and was voted in as chair which she said was a big honor.

As a scholarship committee member, Holtzman was able to read all the scholarship applications and essays and learn about “amazing” individuals so when she was voted in as chair, she said she was “absolutely all-in.”

Holtzman also served as a board member of the NWRA’s Future Industry Leaders Alliance (FILA) until she aged out and she is currently involved with the Women’s Network at Waste Connections that was started two years ago.

During her 26 years in the industry, Holtzman said she has seen it become more diverse with more women joining and she hopes it continues.

“Our industry is very strong and that’ll never change but people change, right? So, I hope that we can hold on to our hardworking people. And, of course, it would be great if we could have more women join us. I know it’s not a flashy industry but if they could see what we see, they would love it just like we do,” said Holtzman. “Women I find are quite well rounded; we can multitask. We definitely have our doors always open to having conversations and helping people professionally and personally, so I think having women in our industry is so beneficial for the personality side of it.”

Holtzman recalls when she was promoted to district manager she was 30 and there were only two women working at her location, including herself, and she was the newest hire so knowing she got the position out of everyone there it solidified to her that she had talent.

“in my mind, I really just had to prove to the team that I was here for them, not to be their boss, if you will, and I would support them in any way I could and in a very short time the whole group really did realize I was the right person for the job and they were on board and committed to us all working together,” she said.

For anyone looking to join the industry, Holtzman recommends it.

“There’s so much growth in our industry. There are so many jobs within our industry – it’s solid. And again, it’s the people, very humble people. You can go to a lot of industries and it’s very cutthroat. You will never find that in our industry. It almost seems like a small group of people but it’s not. One phone call and I can know so much about you; one phone call and you can know so much about me. We’ve never met! It’s just like we’re a small knit family,” she said.

And for people already in the industry who hope to make it their life-long career, Holtzman said, “be the person you want to be. Don’t dream about it, do it. Don’t keep pushing it off. Go for exactly what you want because you can do it.”