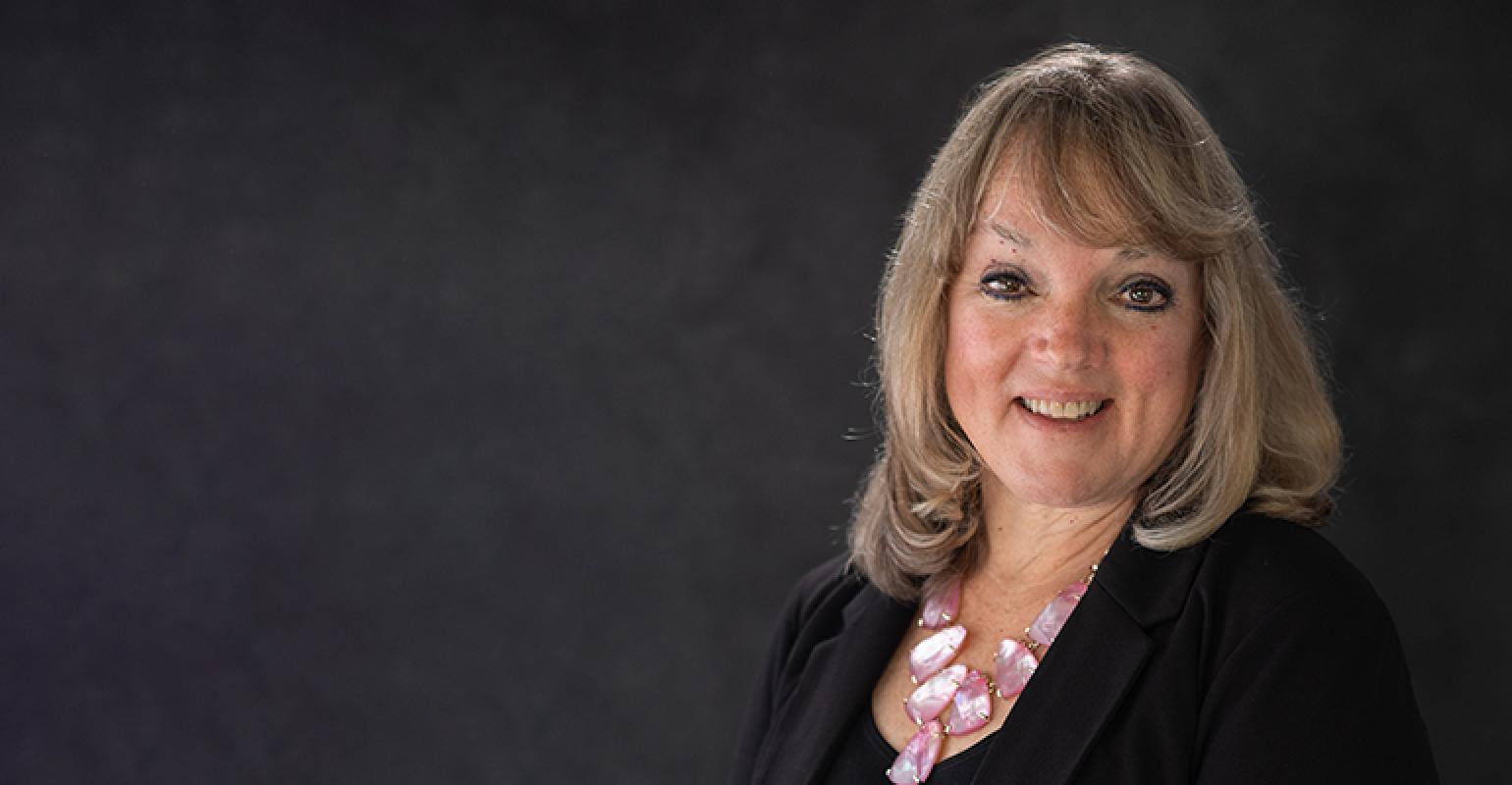 Perkins Manufacturing’s president and CEO shares how she has grown the company while carrying on her late father’s legacy and passion for the business.

Cheryl Waite has been the president and CEO of Illinois-based Perkins Manufacturing Company for about seven years now, but her roots in the industry run much deeper. And through her position at Perkins, she has been able to carry on her late father’s legacy and passion for the business.

Waite’s father, Robert “Bob” Hoppe, started out in the industry back in the 1960s as a distributor for Leach garbage trucks and Elgin Sweepers. As a child, Waite recalls chasing garbage trucks with her siblings and going to visit dumpers in the back of restaurants with her father. She also remembers her father always having customers and people from the industry visiting the family home.

In 1973, her father bought a small machine shop from a man named George Perkins and started making large steel containers. Then, in the ’80s, when poly carts came out, Hoppe was on a mission to develop a lifter that could not only pick up the residential and commercial containers that he made but also the newer poly carts. And that’s how Perkins Manufacturing, now known as an industry pioneer in the design and manufacturing of cart and container lifters, got into the lifter business. 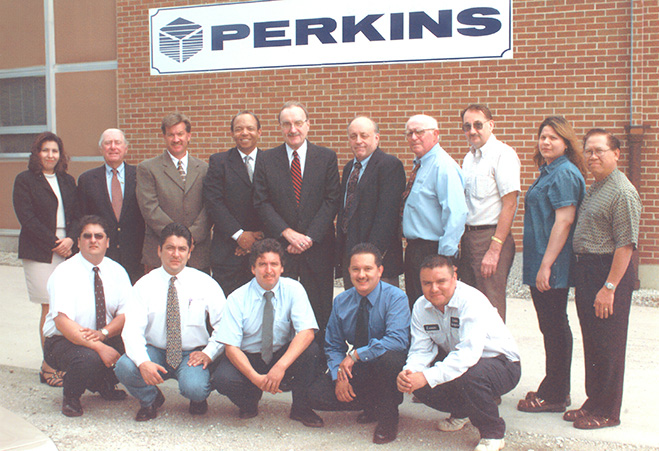 “Throughout my life, I was involved in the business. And coming home from college, whatever my dad needed help with, I would go in and help,” says Waite.

When Waite and her husband got married, her father even had their wedding presents moved to their apartment via a new garbage truck.

When the time came, Waite eventually returned home as her father’s health deteriorated. She helped on and off with the business and was on the Perkins’ board many years before taking on her current position. When her father passed away on December 25, 2009, he left Waite and her sister his most precious gift. 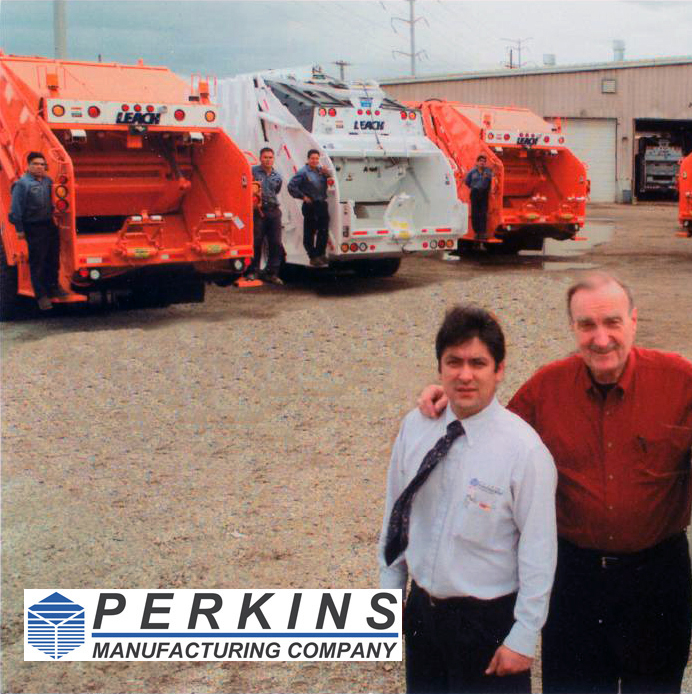 “My sister and I knew that Perkins had a very special place in his heart, and we wanted to continue and keep Perkins in the family,” explains Waite, adding that her sister lives in Florida and is a silent partner of the company who helps with all major decisions. “I knew that with my experience in professional sales, management and banking that I could make a difference, and I was up to the challenge.”

“At first it wasn’t easy,” adds Waite. “My husband’s job had taken us from Illinois to Kansas before my dad passed away. So, the first year I tried working three weeks from home and one week here. After many years following my husband’s job, we moved back to Illinois for mine. And I’ve been coming into the office ever since and loving it.”

Waite, who has been the president and CEO of Perkins a little more than seven years now, explains that growing up she remembers her father coming home from work and telling the family that he felt responsible not only for his own family but for all the families of all the people who worked for him.

“I think I still follow that philosophy, and so does my sister,” says Waite. “We still have some of the employees here today who were here when my dad was running the business. We recently had a gentleman who retired a couple years ago after 41 years. We have quite a few people who have been here more than 25 years, and I admire their knowledge, their dedication and their enthusiasm.”

Even as her father’s health worsened—he suffered from dementia toward the end—he was always interested in what was happening at Perkins.

“Every time we got together with my dad—even when he was really sick and couldn’t remember very much—when I walked into the room, the first thing he would always ask me is ‘How’s Perkins?’ It meant everything to him,” she says.

The Evolution of the Industry

Growing up in the industry, Waite couldn’t help but see how everything evolved as technology advanced.

Before the lifters, everything was man powered. Garbagemen would physically throw trash into the trucks, whereas today, the industry has leveraged the necessary equipment and technology to make the job less strenuous. 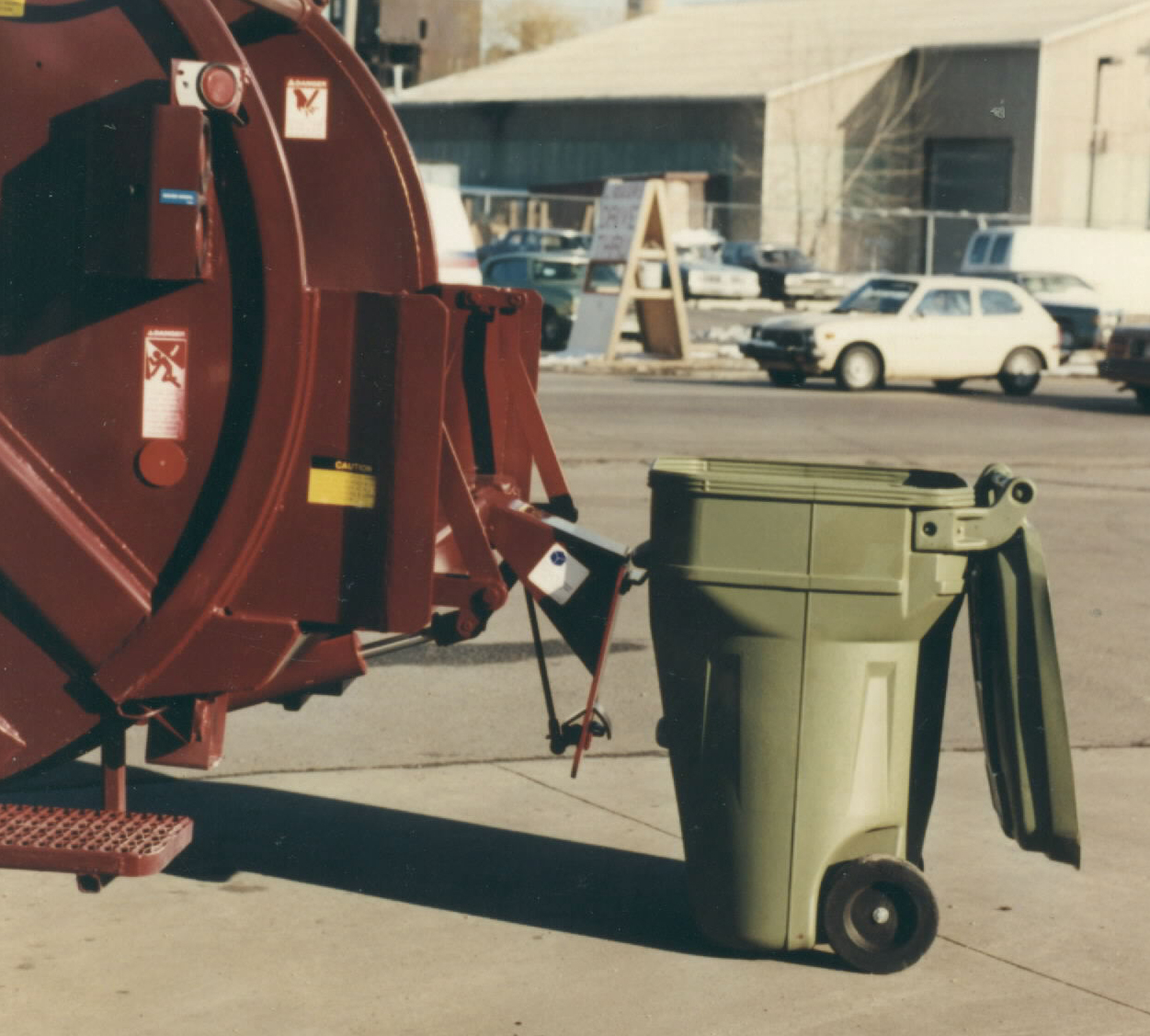 “We can see it has saved on workman’s compensation claims and it’s a lot safer for the drivers,” notes Waite. “In the last few years, we have seen the importance of recycling and food waste. We always try to listen to our customers and what they’re asking for. We have an engineering team, and our engineering manager has been with us for more than 25 years. He has incredible knowledge of hydraulics and lifters.”

Perkins’ engineering team developed a satellite unit about five years ago, which basically grew off the company’s knowledge of producing containers and putting lifters on the back of pickup trucks. The company makes one version of its satellite unit that is a 50-50 split, which some companies have purchased for recycling pickups. Perkins also designed a 10-yard satellite unit and sold it to a small waste collection startup. 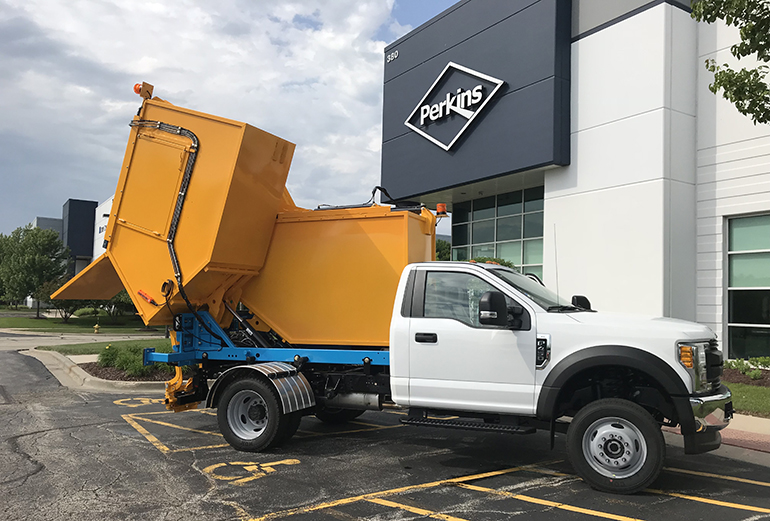 “It’s always exciting to see when we design something for somebody that is a small startup and to watch not only our business grow but watch their business grow also,” explains Waite.

One of the biggest challenges that Perkins helps customers overcome is downtime. When a lifter is down, it causes major problems, so the company ensures it has more than 5,000 parts in stock at a time. The company also has a professional shipping department, so parts can be distributed quickly and as needed.

“If properly used and maintained, our lifters will last a long time, so there is less downtime,” says Waite. “We do have a great service team, and they can either help over the phone or they can go out and service.”

Waite’s husband works as a banker, and before settling into her position at Perkins, Waite moved around to smaller, rural towns in the Midwest for her husband’s job. One of the biggest challenges she faced at the time was being able to find a job wherever they landed.

Over the years, Waite, who has a degree in education, has worked in banks, real estate and professional sales. And all that experience has helped her in her current role.

“As a woman, I think I have been underestimated, but I do find it enjoyable when I not only exceed someone’s expectations but when I surpass them,” she says. “But I can see how women are more respected in today’s market than they were 20 years ago.”

A year or two after taking on her role as the head of Perkins, Waite joined the National Waste & Recycling Association Women’s Council. She is currently on the Women’s Council board as well as the group’s scholarship committee.

“Some of those women have been in the industry a very long time and listening to their stories and what they’ve gone through has been inspiring,” she says.

But when it comes down to it, Waite finds her role and work family at Perkins especially motivating. Waite is particularly proud of taking Perkins from a “job shop” and growing it into what she calls an “excellent manufacturing company.” 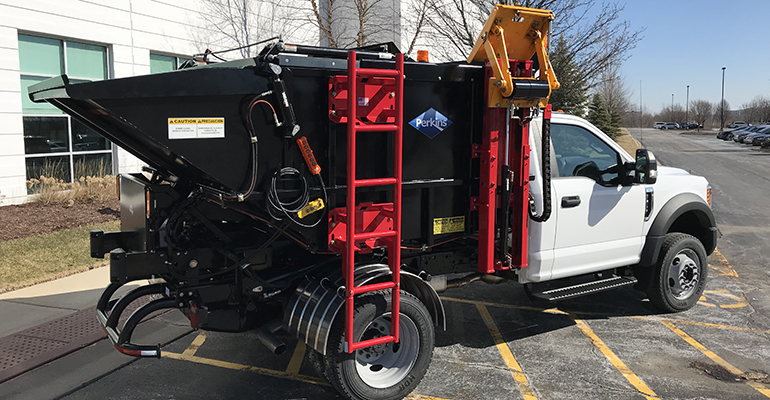 During her tenure as president and CEO, Waite has helped increase the company’s sales five times in the last seven years and doubled the staff. Two and a half years ago, the company moved to a larger facility, providing three times more production space.

“My sister and I invested a lot of money into equipment with the move,” explains Waite. “We’ve also adopted more safety measures for our employees. We are always looking at ways to expand our product line, but our lifters are still our bread and butter.”

“In my personal life, I raised a smart, confident daughter who is now a practicing doctor. And I have been married to my college sweetheart and best friend for 39 years,” she adds.

In addition, Waite says she feels fortunate to work with the people at Perkins as well as the company’s customers. She loves nothing more than to watch small startups grow their business and finds motivation around the office in the employees who have been with the company for a lifetime, as well as from the newer employees who bring in fresh ideas and new perspectives. 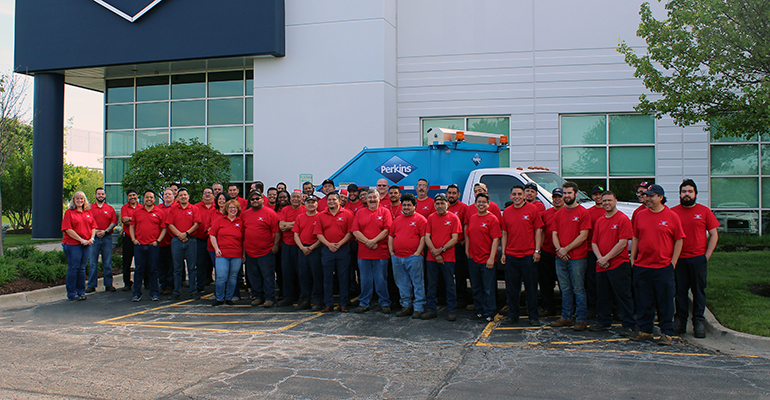 And in her free time, Waite and her husband travel as much as they can.

“I get motivated when I see Perkins’ lifters on trucks all over. I was in Alaska about five years ago, and we were out sitting on a train in the middle of nowhere and here comes this garbage truck with a Perkins lifter. I jumped up and was all excited, and everyone probably thought, ‘This woman has really lost it,’” she quips. “But to me, that was motivating. I love seeing our product out in the market, and I love talking to our customers. I love when our customers come here and visit us. I definitely have my father’s love for the company, for the people here and for the customers. Everyone around here inspires me every day.”