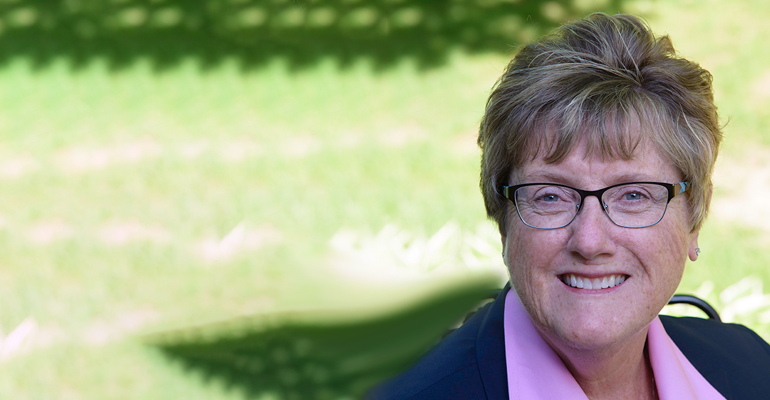 Trent’s dedication to protecting the environment spans 30+ years and landed her in the 2020 NWRA Hall of Fame.

Before taking a deep dive into rule packages sent over from the Ohio Environmental Protection Agency (EPA), Kathy Trent, a government affairs director for Waste Management, took some time to reflect on her career in the solid waste industry that spans more than 30 years and earned her a spot in the National Waste and Recycling Association (NWRA) 2020 Hall of Fame.

“I really wanted to work in the environmental field and so I had done, this is crazy, but I had done a paper on the 1976 Resource Conservation and Recovery Act which was about waste and I thought that was just a great thing, to put forward a future of environmental protection,” said Trent. “So when the company [Waste Management] was looking for an environmental specialist I thought, well this would be great, I can work in the waste industry.”

Besides a brief period in the early 1980’s when she went to work for a consulting firm due to a move to a new city, Trent has called Waste Management her home.

And she hit the ground running.

“In the early 1980’s, all of the subtitle D regulations implementing the Resource Conservation and Recovery Act for landfills requiring facilities to submit permits and states to adopt regulations, so I began to work on those permit applications and following the state’s regulations. As a result I then did a lot of the groundwater monitoring work, special waste analysis, and a lot of the policies and procedures the company put in place to make sure we were in compliance just became a part of my everyday role. But by the mid-to-late 1980s, a lot of the state’s legislatures got involved with passing updates to state laws and regulations and that’s where I started to work in the legislative government affairs arena because I had done the regulatory work and the permitting work. It became very easy then for me, and appropriate for me, to work in the legislative process,” said Trent.

Trent’s responsibilities grew to include public affairs and she became involved with the Ohio Chapter of the NWRA which she now chairs and she’s a founding member of the NWRA Women’s Council.

“I do a lot of regulatory reviews making sure that the regulations that are proposed are really accommodating to our operations and I do a lot of work with other industry members,” she said.

“As the Ohio Chapter Chair of the NWRA I have the opportunity to work with a lot of colleagues with the other companies, both engineers and operations folks, and that allows us to really provide, in partnership with Ohio EPA, comments on regulations that really make them much more effective both in terms of protecting the environment but also on how we can operate with the rules,” said Trent. “So, I really ended up doing that as well as day-to-day activities with legislature whether it's a proposed bill or initiative or trying to communicate to the legislature what activities the industry would like to accomplish.”

One of those accomplishments includes the Slow Down to Get Around piece of legislature that was passed in 2017, she said.

“We did that alongside other industry members as well as the Solid Waste Association of North America (SWANA) and NWRA so it really was a partnership trying to make sure the legislature understood how to make it safer for drivers when people pass our drivers along the road, so that was really a great initiative,” said Trent.

“A lot of the regulations come from legislation and over the years I’ve seen the state of Ohio pass legislation to better regulate construction and demolition (C&D) debris disposal as well as processing of C&D materials so I, on behalf of the industry, was working among colleagues and in partnership with the Ohio EPA, we really pushed forward to update the Ohio laws to regulate construction demolition debris as well as the recycling of the material so I was pretty happy to see that accomplished,” she said.

“So I really have a lot of different rule update packages that I'm working on,” she said. Trent works alongside consultants and industry members as well as engineers and people in the field so they can try to put together the best possible suggestions.

“It’s also nice to work with Ohio EPA because they really have a concept of working together as a partner and so they really do want to listen to how to make the rules effective and protective but they really also like to make sure that they makes sense. So, they traditionally do a lot of outreach to the industry to just see what we think and it's usually a long process on these rulemaking efforts but again, I hate to say it, but I do enjoy it.”

With any of the work that she’s done, whether at Waste Management, with the NWRA or with SWANA, Trent said she has really tried to promote and assure there are environmental education opportunities in the state.

“Sometimes we put together conferences where we can get together and have expert speakers. I just feel that that has given us a great opportunity to collectively work together to accomplish things so I’m a high believer in giving educational opportunities not only to the industry but sharing that and learning together,” she said.

As a founding member of the NWRA Women’s Council, Trent is able follow through on promoting and expanding environmental education opportunities.

“That really began in the early 2000s where we really wanted to have a giveback to industry and trying to promote educational opportunities,” she said.

“One of the things that I worked on over the years is their scholarship program where we have raised funds for variety of needs and those funds are given back in terms of scholarships either to graduating high school family members, family members going on to college, or people working in the industry that are going back to school and so I’m pretty proud of the fact that we‘ve raise significant dollars and have given many scholarships over the years.”

According to the NWRA website, since 2007, more than $200,000 has been awarded to 48 students. The Women’s Council has raised money through its “Where does my garbage go?” coloring book, its boutique at WasteExpo and the internship toolkit.

“This is a toolkit that helps guide them and their development of it as well as documentation for that intern  to take back to their school to document what they’ve learned and how they done it, so we're always coming up with new ideas,” she said. “I’ve met some great women on that council.”

For someone who has worked at the same company in the same industry for 30 years, Trent can still say she’s seen a lot of change.

“I think the main thing that the industry has done extremely well and again I’ve seen this inside Waste Management, is we have a very strong foundation of our commitment to protecting the environment as well as putting people first. You see the technology develop whether it's landfill technology with liners and leachate collection systems, to trucks that have technology on board to help the driver, to the facility of the future that will be run by a lot more computers, so I do see the technology changing the industry but the foundation of how we do it safely and a commitment to the environment has not changed,” said Trent.

“Environmental compliance and making sure we do things the right way is really how we do it at Waste Management and I think the industry does that to a great deal also so my expectation was I wanted to protect the environment and I honestly feel like I’ve had the opportunity to do that,” she said.

So when Trent learned she was going to be inducted into the 2020 NWRA Hall of Fame, she was surprised.

“It really meant the world to me because traditionally, most of the Hall of Fame recipients, you know, may have started the company or developed a piece of equipment—the captains of the industry,” she said. “So to be nominated and chosen when primarily my role for the industry has been advocacy in the states that I work in, I was just really touched by that acknowledgement and I can’t tell you how I’ve appreciated the opportunity over the years to work alongside the other industry members and for Waste Management to give me the time to do that—it really meant the world.”

And for anyone thinking of entering the waste industry or are just starting out, Trent said to be appreciative of the opportunity because it is a family.

“You’ll meet some great individuals that do amazing things so don’t sit back, don’t wait for people to come to you. Get involved. Get involved with the associations, committees, the chapters. Ask a lot of questions. Be yourself. Be kind and I think that will serve you well.”

As for Trent’s future? She’s looking forward to continuing the work she loves, protecting the environment and bringing her family to WasteExpo to receive her NWRA Hall of Fame plaque.