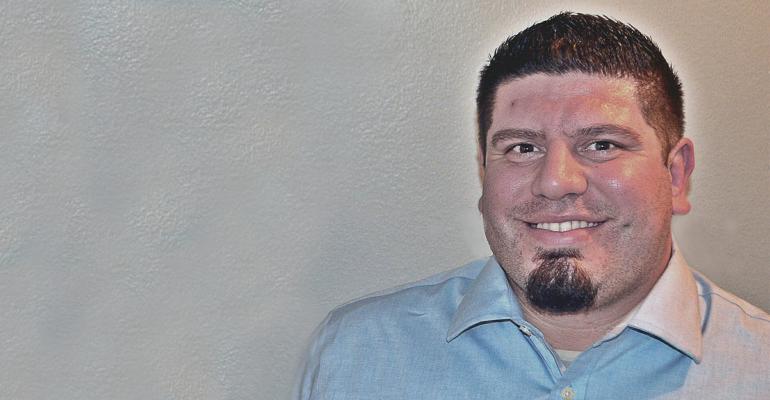 The 40 under 40 winner shares how he came up with a process to move the campus’ first building toward zero waste.

Developing and running successful recycling programs comes down to having effective systems in place—from communication systems linking service providers and users and vetted diversion methods to the means to map out and set up commodities markets.

And it often means pulling off these tasks with limited resources, as was the case when the University of California Los Angeles (UCLA) hired Jesse Escobar as its recycling coordinator.

In that role, Escobar established source separation processes, found markets for specific materials that were getting tossed and brought technology to his department—enabling a very small staff to do a very big job.

In 2018, he was named as a Waste360 40 Under 40 award recipient. In this interview, he speaks with Waste360 about how he helped build momentum around recycling, how he leveraged data and technology to work smarter and how he came up with a process to move the campus’ first building toward zero waste.

Waste360: You were a law enforcer in the Air Force. How did you make your way from that role to creator of recycling programs at a large university?

Jesse Escobar: Actually, after I left the Air Force, I first got into environmental and occupational health.

I went into the Air Force two weeks after 9/11 with the idea I wanted to help and go to school afterwards. When I got out six years later, I didn’t want to stay in law enforcement, but I still wanted to help others. I wanted to work on environmental community problems—something that would leave a better world for my kids.

My job in environmental health was focused on administrative work, but what attracted me to the recycling coordinator job is that I would be involved in operations. I could still work on helping to make the environment safer and more sustainable, but it was more hands on.

Waste360: I understand UCLA had just created the recycling coordinator role when you stepped into it. What functions were you charged with, and how did you continue to invent this position?

Jesse Escobar: UCLA set a goal of zero waste by 2020. My job was to analyze different sustainability programs and initiatives to obtain this goal.

I learned on the job that I could use data and technology to be a better analyst. I began focusing on collecting and analyzing data to guide my direction and increase efficiency. It was a great tool given our limited resources. There are 419 acres and over 180 buildings on campus, and I had a staff of eight.

I started using technology to gather and analyze data to minimize the environmental footprint while saving money. For example, when we picked up waste on campus, we had no information on materials. Workers just picked it up in their isolated areas. I developed an app to identify high-volume and low-volume areas campuswide and times that bins filled fast in high-volume areas. Then, we could establish routes that fit the waste flow from location to location.

We learned where to put bins so they were best utilized and that we could cut one person from picking up trash and reallocate that resource to another recycling program.

Waste360: How else did you leverage technology as a way to collect and analyze data?

Jesse Escobar: I learned how to code, make apps and create tools to be able to make it easier for people to properly dispose of materials. Technology was a way to communicate and educate departments.

For instance, I coded the sustainability page of UCLA’s website to be able to get and give information. It’s interactive, giving information on what and how to recycle, including specialty items, and it provides contacts.

Waste360: What happened after you began to source separate streams?

Jesse Escobar: When we began source separating, I found we could divert volumes of specific items that can bring in money, such as wood pallets on campus loading docks. Rather than put pallets in the waste stream, we separated them and staged them in a way where vendors could easily pick them up. Then, I found vendors to start selling other specific materials to, like toner and ink cartridges.

Waste360: What did you most enjoy about the work environment, besides that you were more involved in operations?

Jesse Escobar: I love that it’s a blue-collar industry. I grew up in a blue-collar family, and the work ethic is you get to the root cause of a problem and fix it. You don’t stop working until the work is done. And that’s what made me passionate about this job—the people and how determined they are to find and fix the problem.

Waste360: Name a problem you’ve dealt with and tell us how you overcame it.

Jesse Escobar: When offices needed to get rid of furniture, we wouldn’t necessarily be notified. I began working on a system where we would get advanced notice. Then, I could develop a plan to divert rather than landfill. We began arranging for ways to deal with the materials and find a market. How we did it, came back again, to leveraging technology as a communication tool. Campus clients contact me before the new desks or office supplies come in. It not only has helped me plan but has changed how clients look at waste when they know we can get something for it.

Waste360: Can you talk about developing processes for improvement?

Jesse Escobar: One good example is our math department building. I was asked to pilot a process to make a zero waste building on campus. Setting up a process entailed looking at several things, such as the waste collection system, which needed to be changed. And we needed to consider that a lot of students were only there for a short time, so even once there was a system, we needed a way to teach newcomers.

I first looked to see how waste was collected. I did a count of all the waste bins. There were over 100 receptacles because there was a deskside recycling system plus larger trash bins. This system didn’t consider that there was one person who had to empty all these receptacles. So, I established stations around the building, each containing three streams. And I set up waste collection in common areas.

I audited waste to see what we needed to capture and had pictures of those materials made up for signage.

Staff made a PowerPoint presentation, which they included in the student orientation. Staff learned about recycling as they made and taught presentations. It was like a teach the teacher. Plus, now students who cycle through had a briefing. They knew how to dispose in three streams: trash, compost and recycling. Everyone learned. Staff taught staff and students, and students taught students. Now, we are emptying 25 bins from five stations versus over 100 bins.

This process fixed a problem for custodial staff plus people learned to dispose of trash more efficiently. On the back end, this helped me source separate and divert more.

Waste360: What is your proudest accomplishment at UCLA?

Jesse Escobar: To have helped UCLA lower its environmental footprint and to be able to make sustainable changes to keep doing it is one of my biggest achievements in my life. Twenty years down the line, people here will still be diverting waste, and I’m proud to have incorporated changes that they can build on that shape our future in different ways to lower the campus’ environmental footprint.