When it comes to recycling, one of the biggest challenges is on-the-go recycling. To accomplish that goal, three colleagues at the University of Georgia have developed a low-powered interactive bin that gives users positive feedback every time they toss a plastic container, aluminum can or glass bottle into the receptacle.

Six low-power LED bulbs light up to flash a smiling face on the WeRecycle interactive bin, which also has a visible counter that increases each time an item is tossed in. Its developers say the bin has been shown to increase recycling activity by 50 percent.

WeRecycle is the brainchild of three colleagues at the University of Georgia (UGA) College of Engineering: Dr. Jenna Jambeck, Dr. Kyle Johnsen and Eliana Mozo-Reyes. The startup recently launched a Kickstarter campaign to raise $47,000 to source environmentally conscious materials and scale manufacturing of the bins by the end of 2015. The campaign ends Sunday. 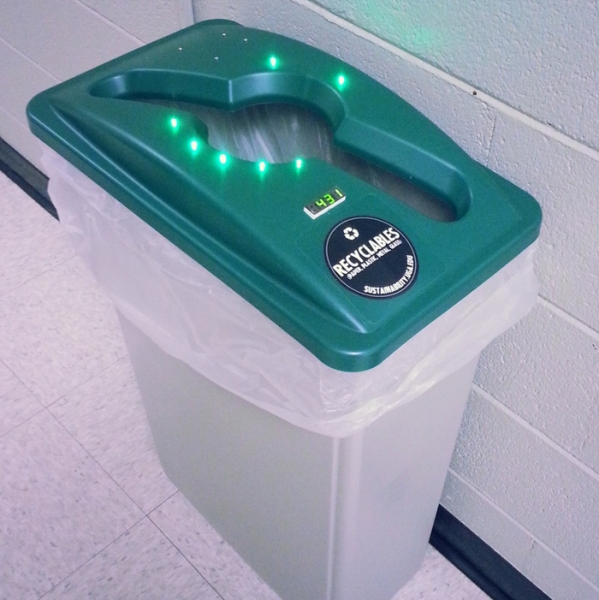 Designed to target on-the-go recycling, WeRecycle bins can be purchased with a remote transmitter for real-time data collection and they are a good fit for schools, institutions, sporting events and any indoor public areas in need of a recycling boost, says Jambeck.

“We’ve seen recycling rates plateau and we developed this as an intervention or behavioral hack to give people immediate positive feedback by having the recycling bins simply say ‘thank you’ without literally saying ‘thank you’,” she says.

The current WeRecycle bin is the company’s second-generation prototype. It’s been tested in various environments and is now ready to go public.

“This version I really like a lot because we were able to keep the power really low and have it run off batteries,” Jambeck says. “Our goal is not to be the most bells and whistles, not to be a video game. We are trying to increase recycling but we don’t want to waste energy to do that.”

The three founders have been working on the idea of using technology to promote sustainability, resiliency and restoration since 2010. The company has a goal of social good, she says.

For example, the company plans to manufacture domestically and responsibly, use lead-free solder and post-consumer recycled materials such as recovered coastal plastic. WeRecycle bins have also been designed with end-of-life in mind and the company will practice extended producer responsibility. Lids will be taken back if people no longer want them or at their end-of-life to be reused, disassembled or recycled. Jambeck says the company also promotes only purchasing the minimal amount of lids to result in the intended positive impact.

As of right now, the bins—which are really lids at the moment—a being built by hand by students in the lab at UGA. The current price is $150 per lid and $100 for the remote transmitter for data collection. Jambeck expects that price to drop significantly once the company is able to scale up manufacturing.

In the meantime, WeRecycle is investigating combining the bin’s positive feedback with rewards, games and contests. The company plans to do research with 3P Partners, a social enterprise and home of PIPs Rewards. PIPs stands for Positive Impact Points and works like frequent flyer miles for doing good.

“What gets us very excited by the WeRecycle bins is the real challenge with recycling has been to increase engagement at the user level so in the street, in the home, in the institution,” says Wendy Gordon, founder and CEO of 3P Partners. “Jenna’s engineering talent has gone towards creating something that engages the user in a very simple way with these flashing lights that senses the recycling event. It really does seem like she’s on to something.”

Gordon says her company looks for partners just like WeRecycle, partners that can verify a positive impact action has been taken and want to incentivize that behavior.

“It’s really a perfect marriage,” she says. “We do think classrooms, schools, maybe even sporting events will be great target audiences. It’s really going to be interesting research project for us.”

The two companies hope to secure sponsorship from a foundation or corporation interested in waste reduction and launch a pilot program by this fall.

“We would really like to see more recyclables collected where it’s really necessary and where the infrastructure is needed. There are areas that are looking to use more recycled materials and we’re just not doing a good job of getting it out of the waste stream especially in these situations when people are outside the home,” Jambeck says. “I want these bins to be out there because I believe it could actually make a difference.”