A look at Stifel’s roundup of the top 10 trends in solid waste over the next 10 years.

“Solid waste has typically been seen as evolutionary, not revolutionary. That perspective is still relevant, but the cycle time for adopting change is getting shorter.”

According to the report, tight labor markets, the rapid influx of mobile Internet of Things (IoT) and state level, climate change-driven policies are dictating immediate industry action. “The process of collecting and disposing of trash (landfill, recycling, composting and energy conversion (waste-to-energy (WTE), anaerobic digesters, bioreactors)) is about one stop at a time with a focus on route density and internalization, which supports sustainable pricing leverage and maximizing cash on cash returns,” the report points out.

Here is Stifel’s roundup of the top 10 trends in solid waste over the next 10 years:

1. There are more little brown boxes in the residential waste stream than anyone could have imagined. How much more is possible? Potentially a lot; 85 percent of consumer purchases are still done in brick-and-mortar stores.

“The holiday season certainly brought to focus the sheer volume of little brown boxes showing up in the residential MSW [municipal solid waste] stream,” according to the report. “In the U.S., consumer purchases are still 85 to 90 percent brick-and-mortar based, but that trend is in a long, steady decline as e-commerce continues to expand.”

The resale of collected and recycled fiber into the global papermaking market was massively disrupted in 2018, the report notes. Virtually all imports of OCC and MWP into China were diverted to alternative markets—India, Southeast Asia, Vietnam and Eastern Europe. 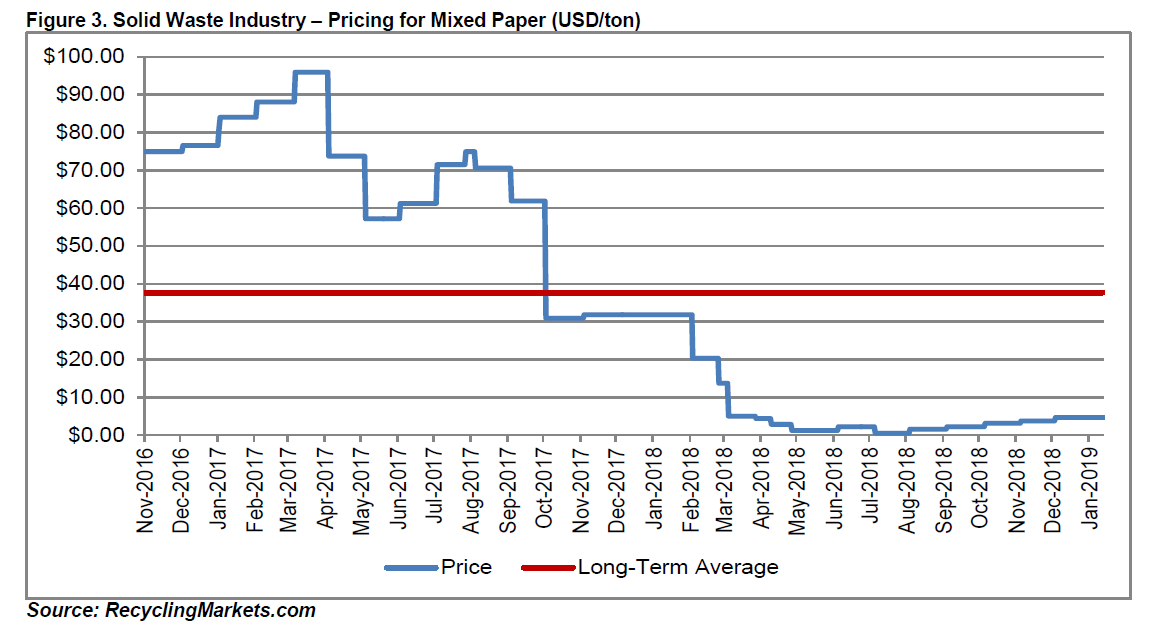 Despite the dramatic hit to fiber prices in FY18, the demand side remained healthy.

3. Customers (municipal authorities) come clean on recycling versus diversion with a renewed commitment to true sustainability driving reuse: Recycle only OCC (for now), only plastic bottles with a neck, all cans (beer and soup), NO GLASS or single-use plastics.

“For 30 years, the domestic recycling model has been, in our view, mispriced and, frankly, to the consumer misleading about what is recycling versus diversion,” notes Hoffman in the report. “The commodity value peaked in FY17 only to trough in FY18. The commodity and contamination impact on the performance of the recycling collection and processing business model is finally creating the catalyst for change.”

“Contamination of the collected waste stream is a huge issue,” the report points out. “Today, the problem has multiple points of why contamination has sky rocketed from 5 percent to 10 percent to over 20 percent in the past five to 10 years.” 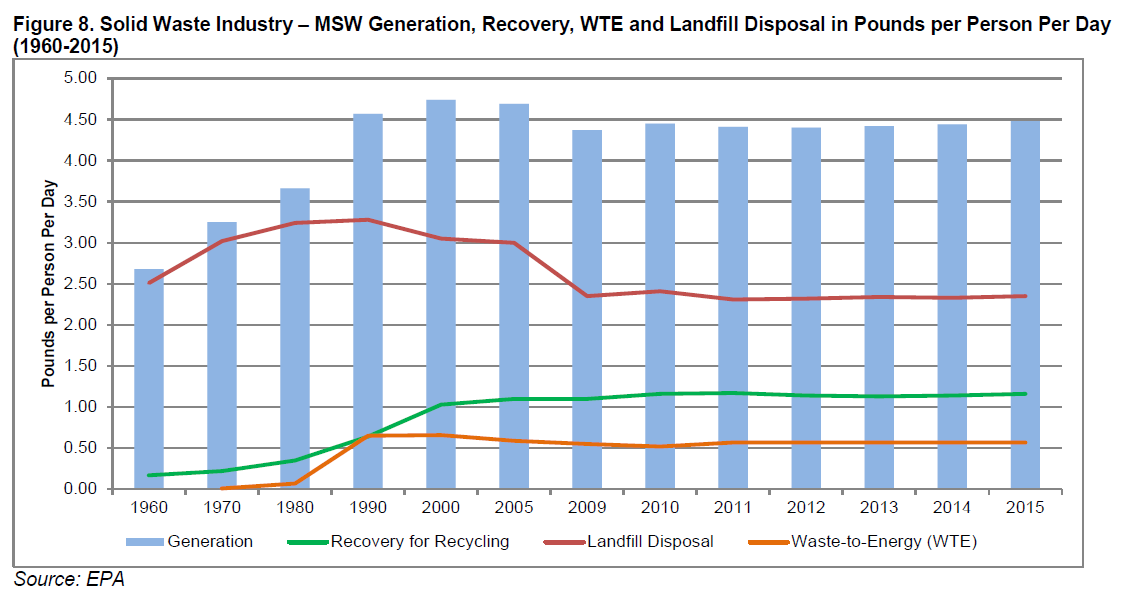 There are about 1,530 non-hazardous waste landfills in the U.S. with nearly half controlled by 25 companies, of which two-thirds of that group are controlled by the five public companies.

“We expect small private and mid-to-small municipal landfills to close at a steady pace over the next decade,” says Hoffman in the report. “The drivers are a lack of land to expand and the rising cost of managing leachate and the closure post closure obligations. In 10 years, we think total non-hazardous waste landfills will be down to 1,000 to 1,100. In urban markets, if there are three to four landfills on average today, the trend is likely for at least one landfill to come out of the market over 10 years.”

The report also notes that cell development and leachate processing cost have been on the rise for several years. Additionally, there is a growing concern of PFAS human exposure mostly through drinking water. PFAS are a group of man-made chemicals that have been manufactured and used in a variety of industries around the globe since the 1940s.

For solid waste, this is adding incremental cost to leachate collection, which is already 5 to 10 percent of sales cost item, the report notes. “Smaller landfills with less than 15 years of capacity will not want to spend the capital to internalize managing leachate and that will accelerate the closure.”

5. Post-collection recycling increases from 25 to 30 percent (more “little brown box” effect, not organics); composting stays at 10 percent, as does WTE; and landfill the remainder declines toward 50 percent from about 55 percent.

“The gradual and increasing growth of e-commerce will shift more packaging into residential collection, which should slowly walk up the rate of recycling all things being equal,” according to the report. “The biggest headwind to this outcome is the current state of recycling in North America. If the market rebalances the recycling business model to truly focus on reusable material, the actual recycling rate dips first and then recovers as more paper packaging volume is captured in residential collection.”

According to the report, two critical operating issues for solid waste collection are route density and customer retention.

“About half of customer turnover is service related, missed pickup, late pickup, disruptive to the customer business, truck leaked oil, truck hit the mailbox,” the report adds. “With a mobile app, the solid waste service provider can put out an alert and the customer can ‘Google-like’ ask the question and get that answer without a live call.”

The local regulatory challenges to successfully put on the road Level 5 (fully autonomous) AV garbage trucks in either residential or commercial collection assures AV in a pickup and delivery setting is decades away, according to the report.

Alternatively, however, AV-like technology (Level 2 automation with lane assistant or collision avoidance up to Level 4 with technology assisted driving/productivity) could be used in residential markets to maximize productivity.

In addition, there are several applications at the landfill where AV equipment can and should be readily deployed, including landfill compacting vehicles and even bulldozers that work the face of the landfill cell, according to the report.

8. Alternative-fueled collection vehicles make up 50 percent of the fleet—not only fuel, but maintenance savings helps with this conversion.

The diesel gallon equivalent to use compressed natural gas (CNG) even with diesel prices around $3 per gallon ($2.61 per gasoline gallon equivalent (GGE)) range is about $2.11 per GGE. On fuel savings alone, the payback period is in a three- to four-year period for CNG trucks. Adding in fueling and maintenance infrastructure costs pushes the payback out another year or two, according to the report. However, the long-term maintenance savings after years five to six makes the cost advantage versus diesel incrementally attractive. 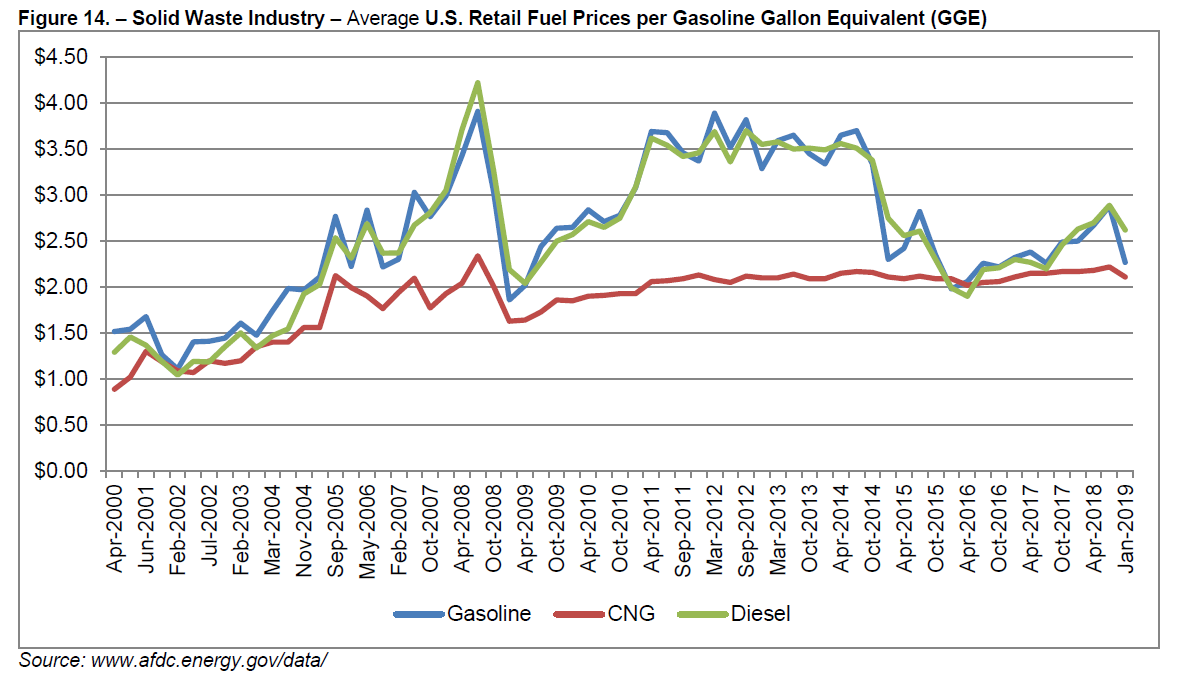 “Solid waste and municipal bus services were early movers on converting to CNG-powered vehicles,” Hoffman points out in the report. “Solid waste as a group is in the low 20 percent converted, with Waste Management over 50 percent of the routed fleet converted. We expect the average level of fleet conversion could more than double over the next 10 years as fueling infrastructure investments accelerate independent of the solid waste company investments in the same and the lifetime maintenance differential remains favorable to CNG.”

Stifel projects that in 10 years, the probability of a viable solution to economically capture the energy value of organic waste—specifically food waste—still will not be able to address the following: Does it work? Can it be scaled? Is it economical without subsidies, and is there a favorable regulatory backdrop?

“For now, there is no technology that works, is scalable and is economic without subsidies to convert primarily organic waste into energy that is better than landfill gas or WTE,” the report points out.

10. U.S. solid waste generation has inched up to 4.50 pounds per person per day.

A healthy economy and continued use of single-use packaging helped lift waste generation per person to 4.50 pounds per day, the report notes. The growing presence of little brown boxes and the consumption of regularly used products in small quantities could keep the average daily production of waste per person at least constant, or even expand. 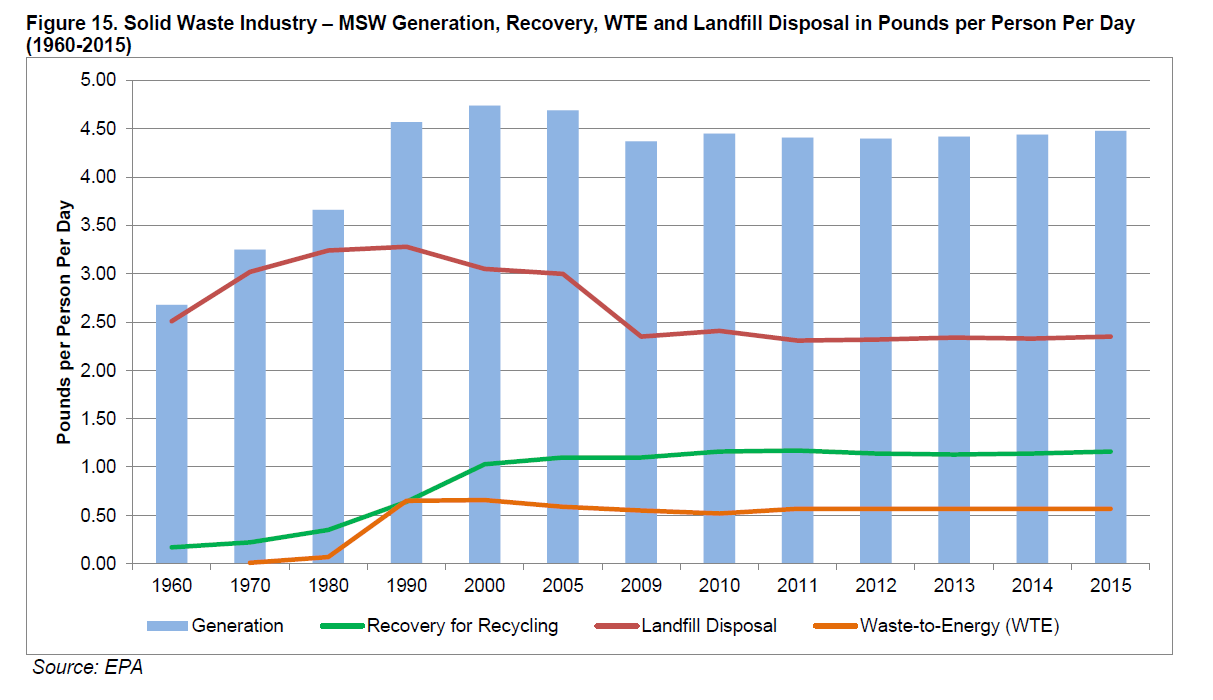 “The unknown is, will the growing angst about single use packaging and PFAS lead to a secular change in how plastics are used in packaging and with it a dramatic reduction of them in the waste stream?” Hoffman points out. “Solid waste would likely cheer the elimination of films and single-use packaging that is not realistically recyclable (think #4 to #7 plastics).”

“However, replacing single-use packaging would probably increase the waste generated per person until efficient options were widely developed and deployed,” he adds.

In summation, free cash flow is what makes solid waste so compelling, according to the report.

“The FY19 fundamental outlook should prove better than the market expectations with price better than inflation and stable underlying market volumes around 1 percent, excluding purposeful divestments,” notes Hoffman in the report. “The deal climate remains very robust. Margin expansion is highly probable. And if all else fails and the U.S. economy tips into a recession, solid waste is defensive, as 80 to 85 percent of sales are service based.”

The full report is available here.