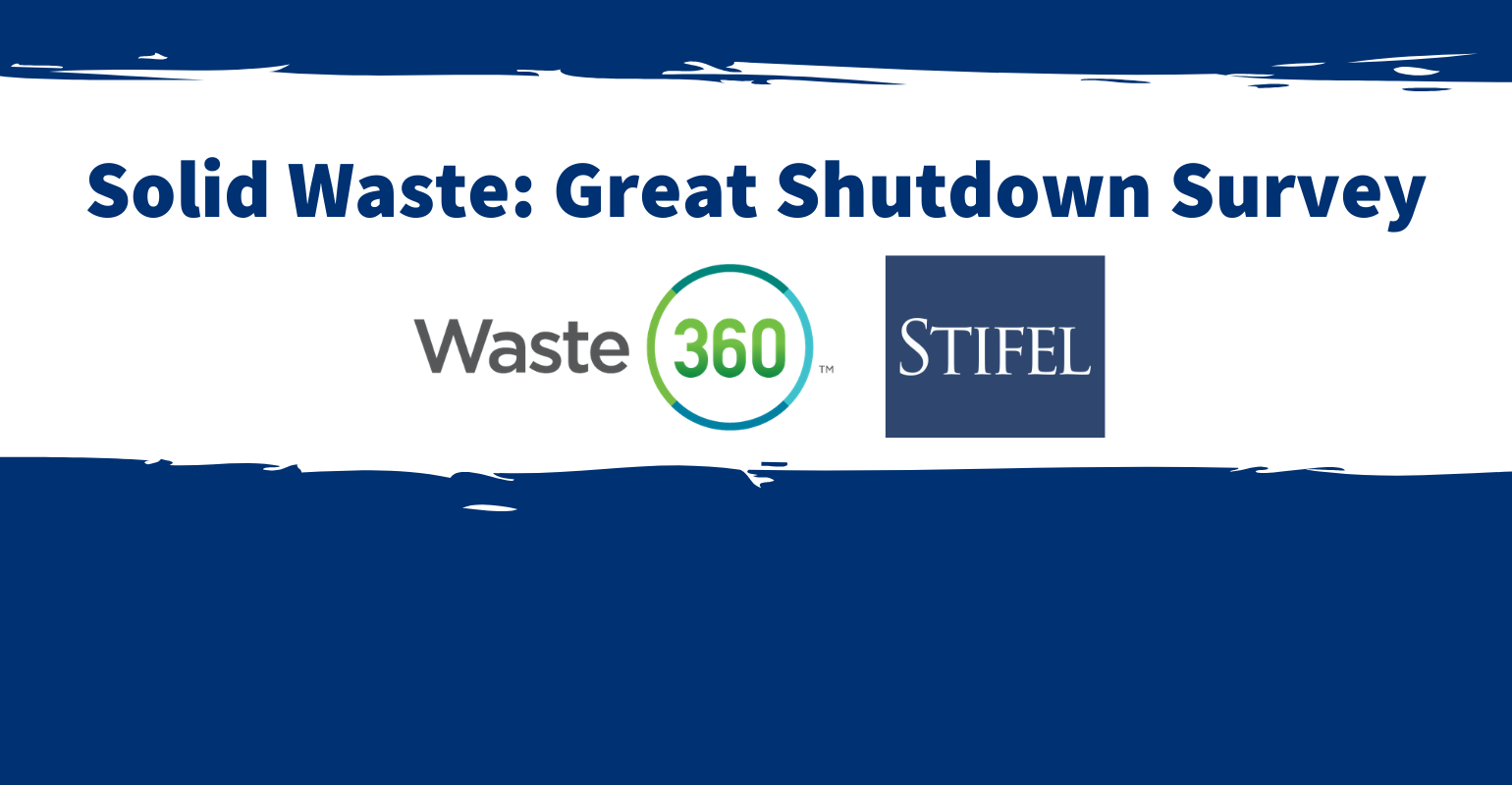 We recently surveyed, in collaboration with Stifel Financial Corp., solid waste service companies, focusing on the impact of the “Great Shutdown” on operating models.

And guess what? Commercial activity is off (by a lot).

Surprised, or was it what you expected? Dig a little deeper to into the analysis by Stifel’s Michael E. Hoffman to see observations about the results and the respondents.

The results confirmed what has been widely discussed:

Two-thirds of respondents are engaged in all aspects of collection and recycling, recycling; nearly 30 percent operate a landfill; and 20 percent a material recovery facility (MRF). 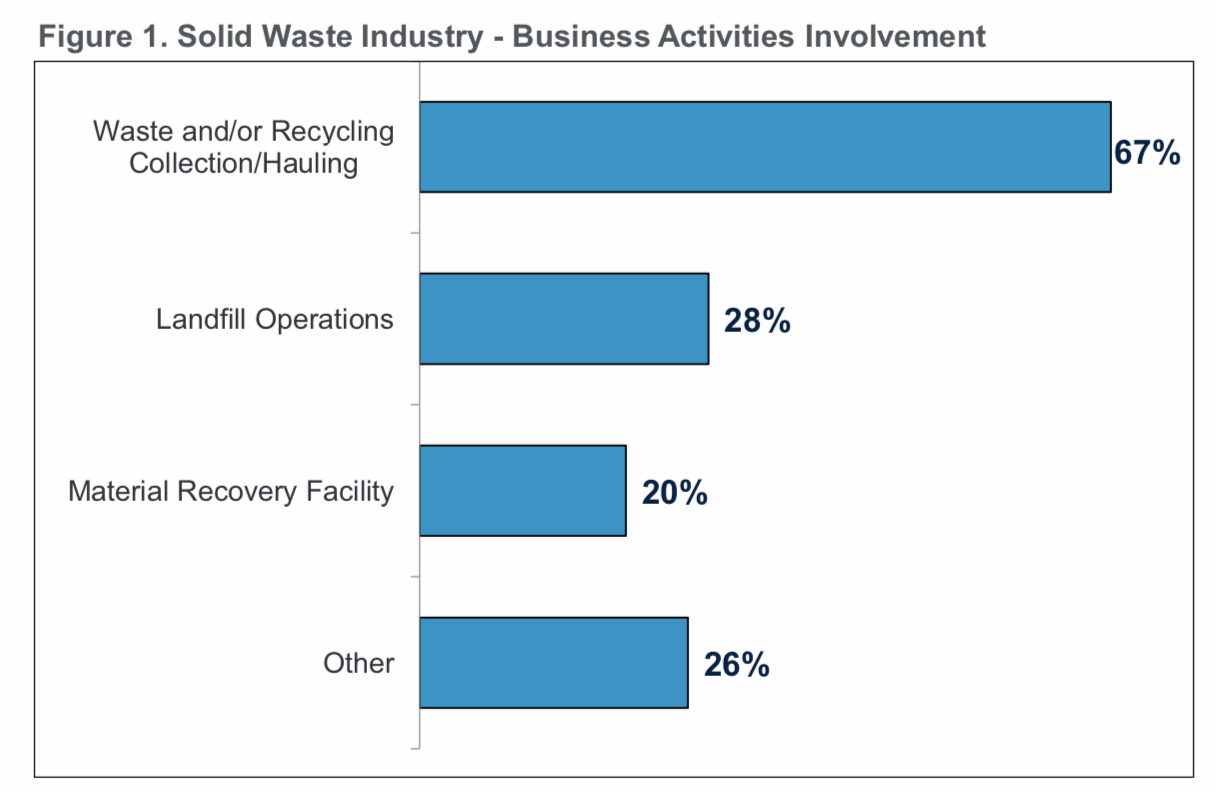 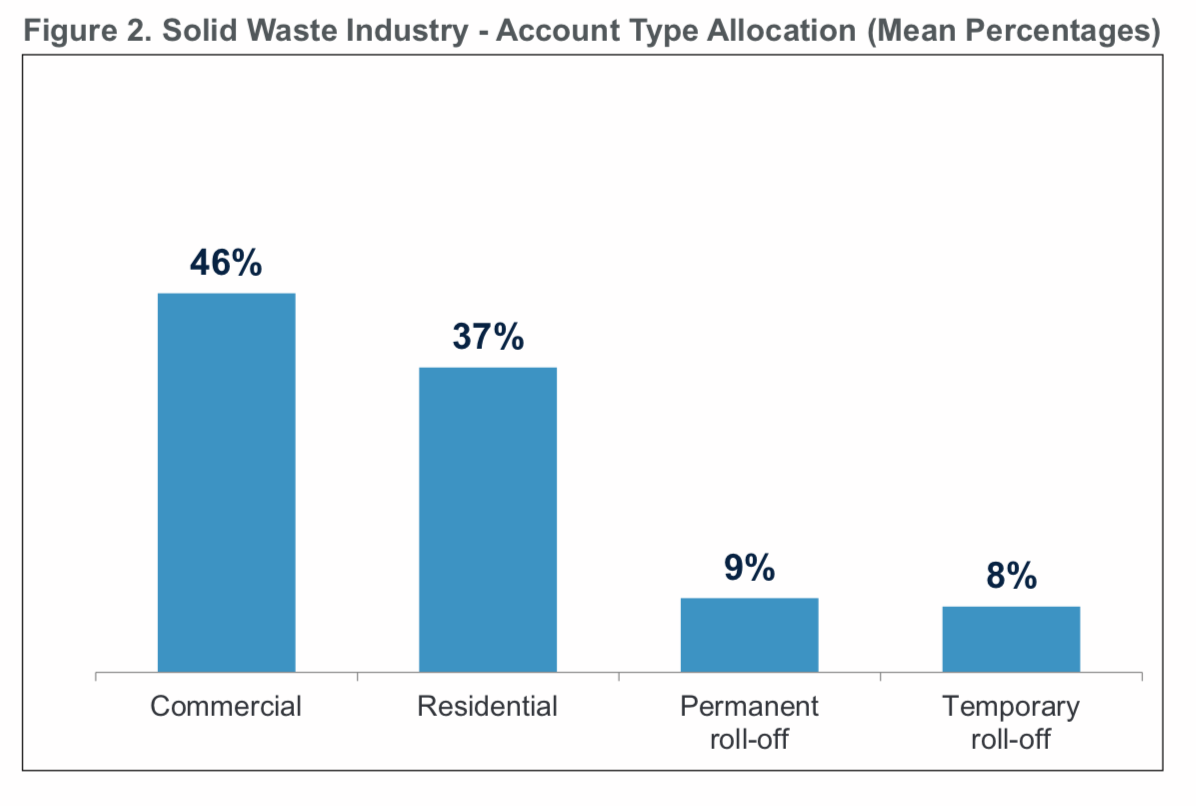 Profile: The impact of stay-at-home orders on residential collection volumes has been widely reported in the mass media. The survey validates these observations.

The service profile of respondents indicates that nearly 40 percent use ASL (automated side-loaders), with 62 percent employing rear-loader/physical pickup.Three-quarters of those are take-all services (whatever is put on the curb they have to take), Of the customer mix two-thirds have pay for a separate recycling pickup and nearly 30 percent have a third pickup. 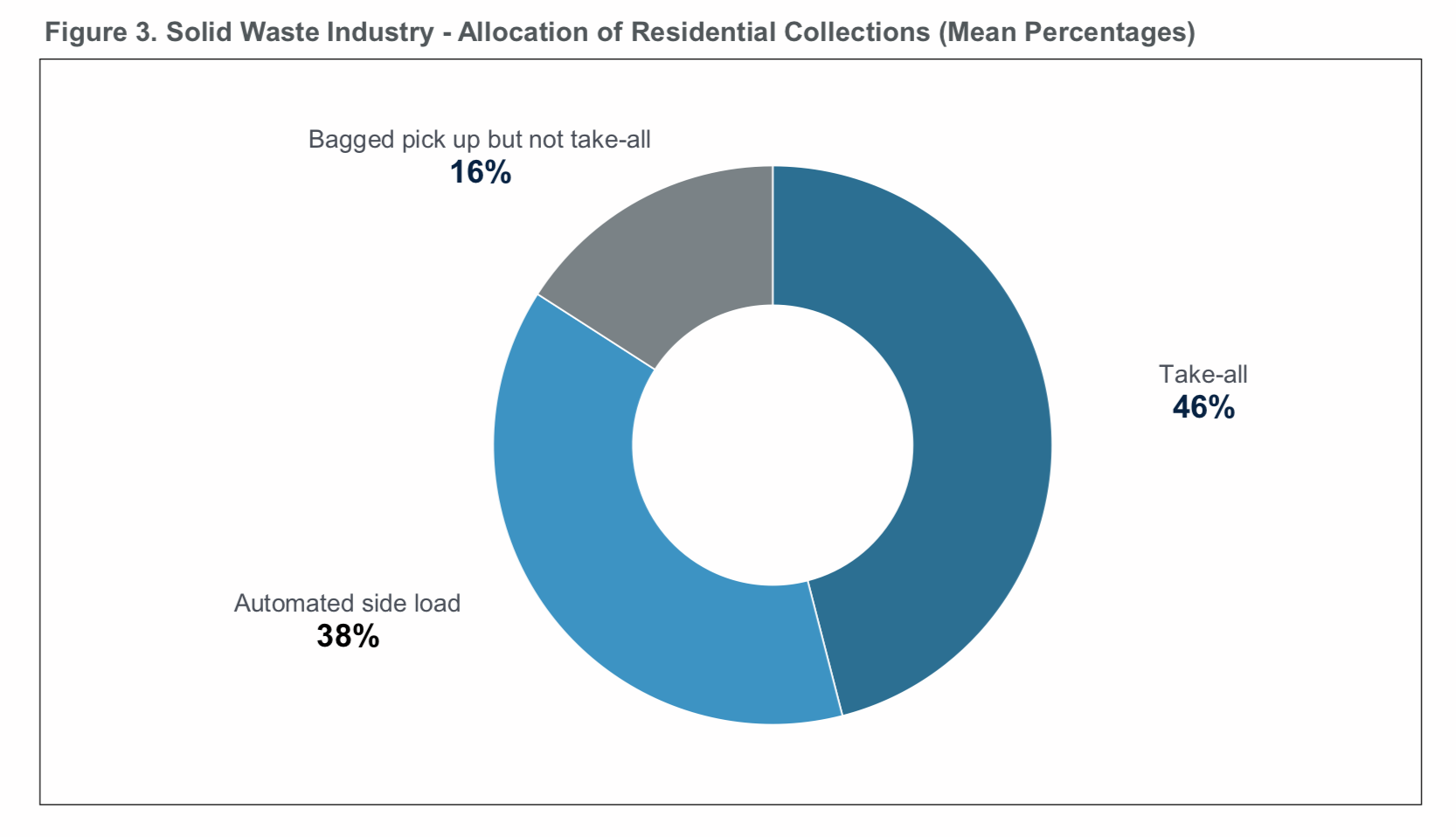 Two-thirds of the responses had increased volume, and 57 percent of the volume increase was between 10 percent and more than 30 percent. 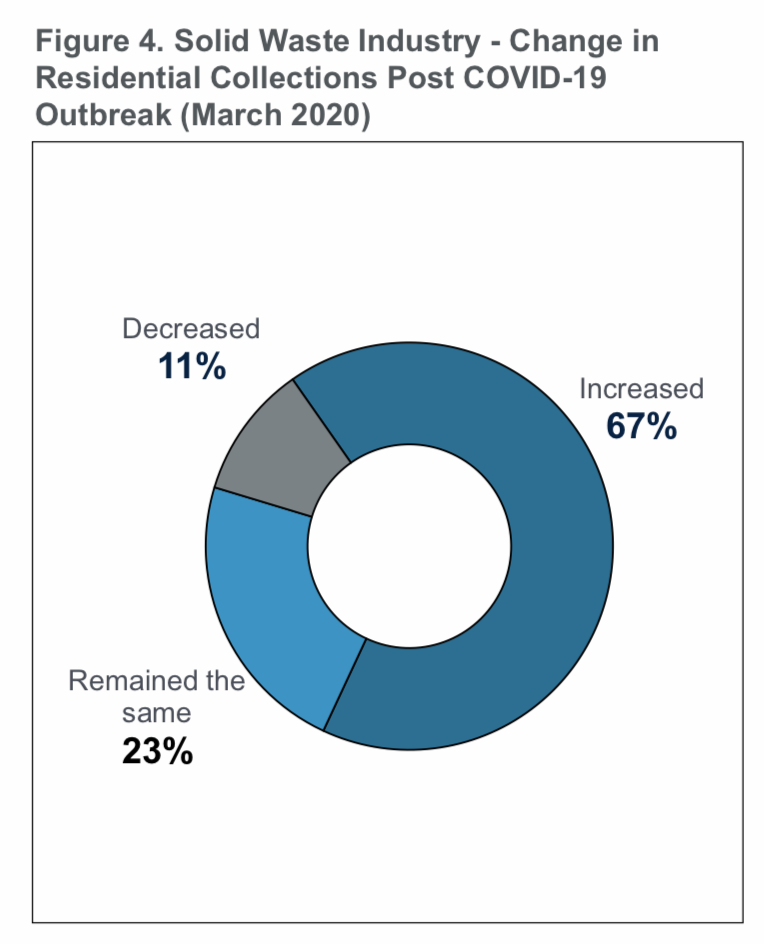 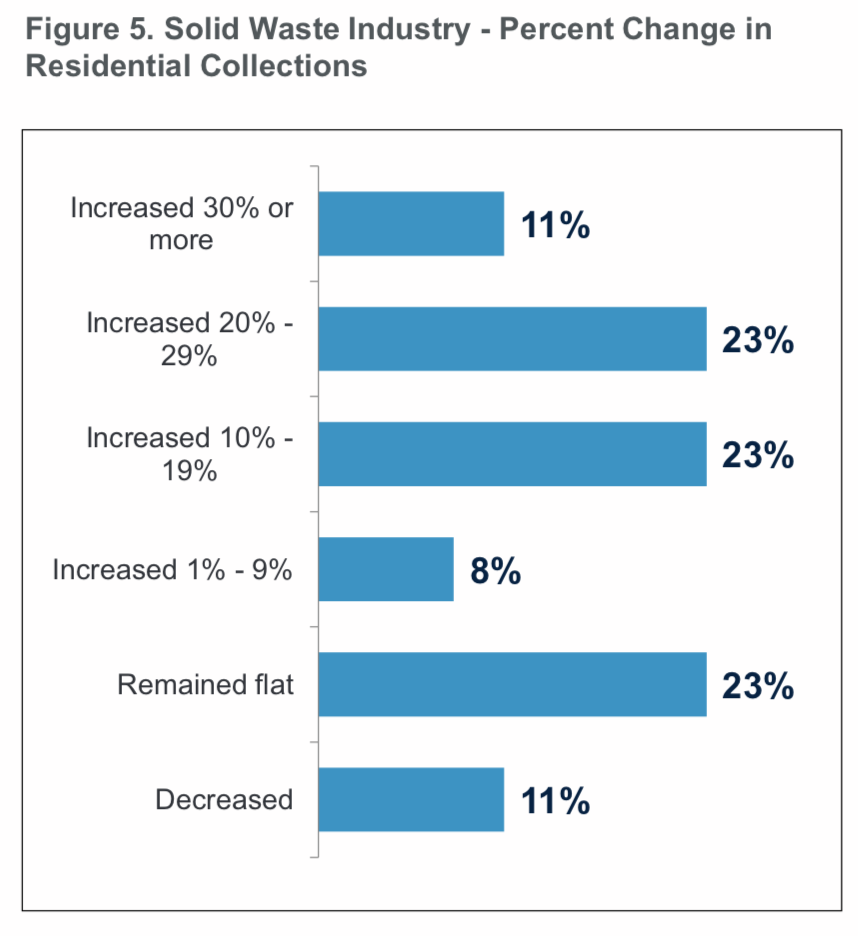 Three-quarters of the responses could not pass along the added cost of increased volume to the customer. 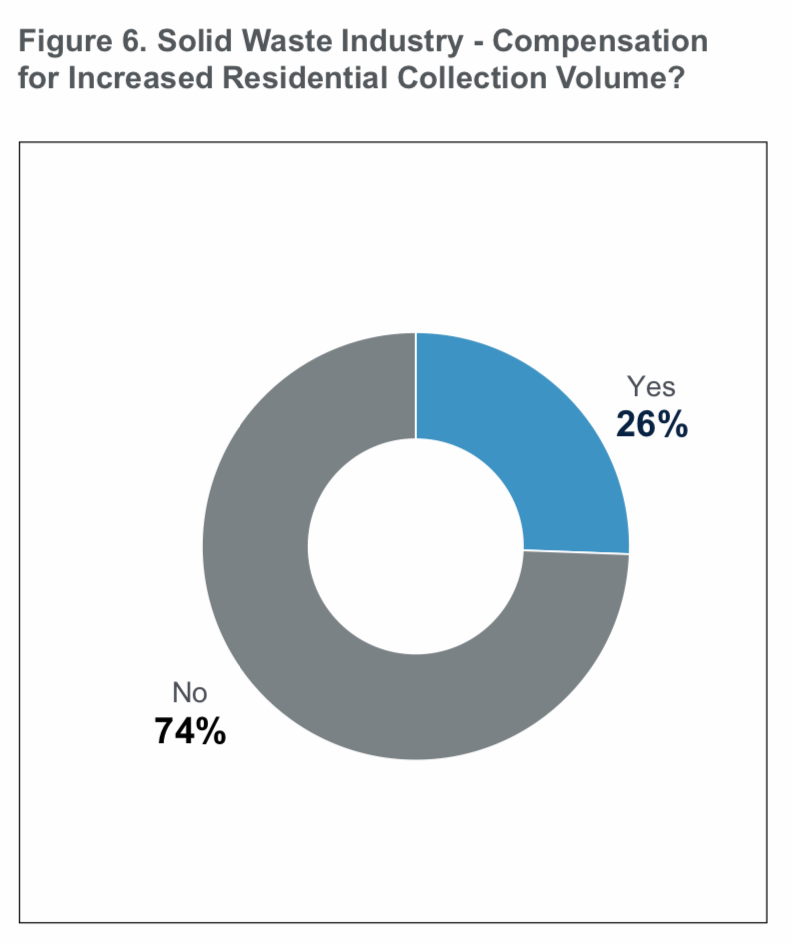 Given the share of the residential market that is under a negotiated contract and not a subscription, more service companies are getting relief than we would have expected.

Two-thirds of the respondents saw a decrease in commercial collection volume. 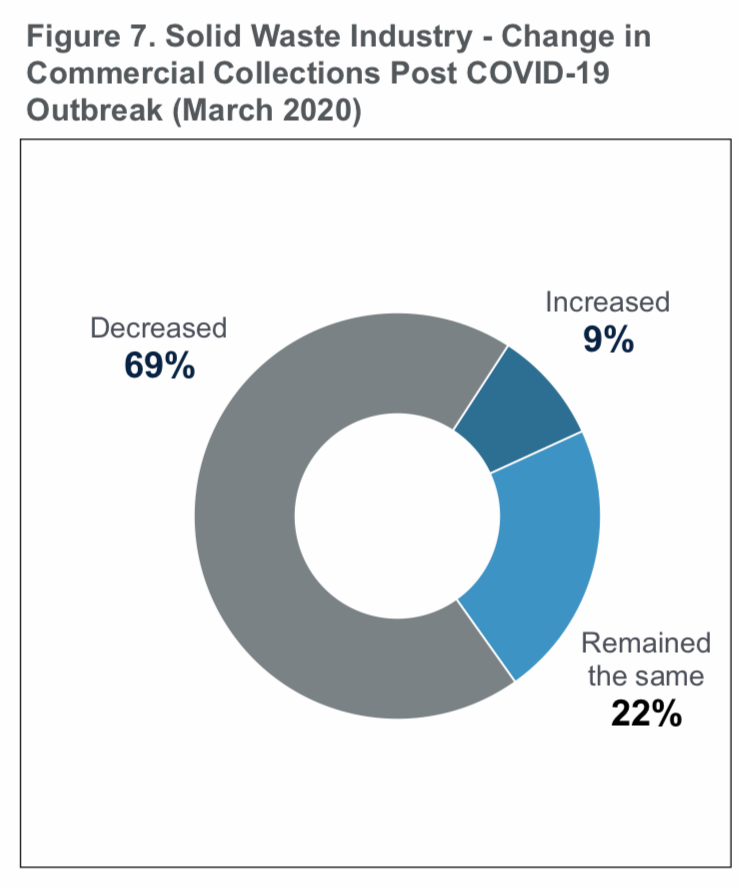 More than 45 percent of the respondents had a volume decline greater than 25 percent, and nearly 30 percent had no decrease (22 percent) or an increase (7 percent). 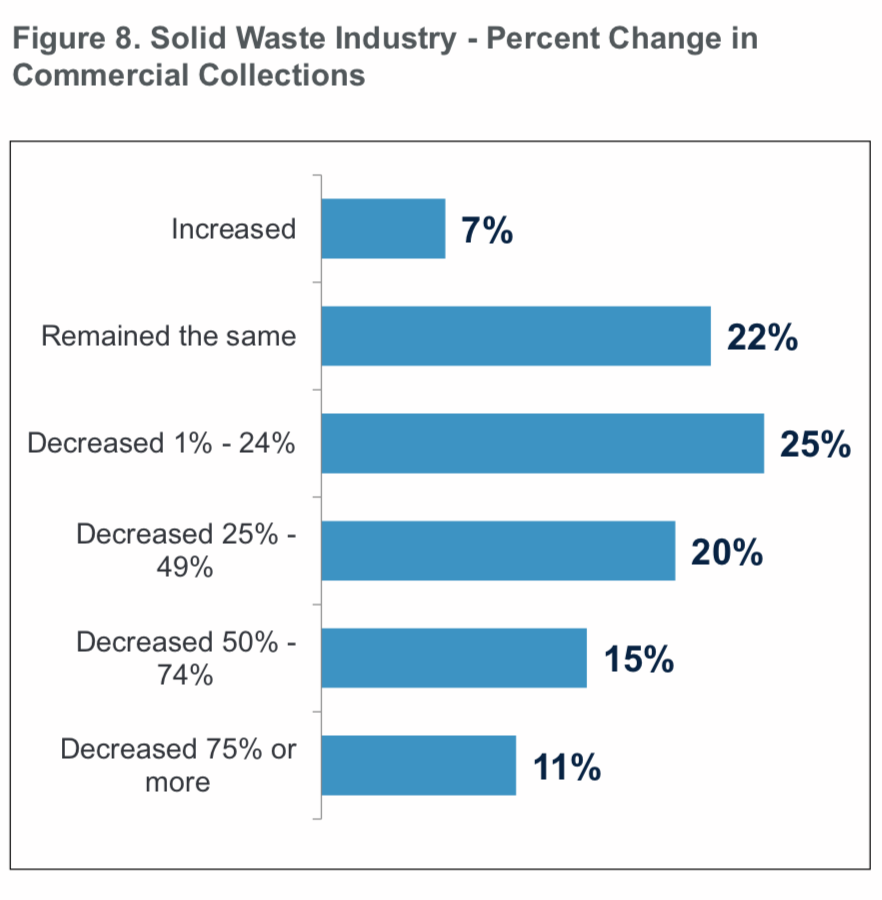 Nearly two-third two-thirds of the customers did not seek a service change and only 9 percent actually canceled. 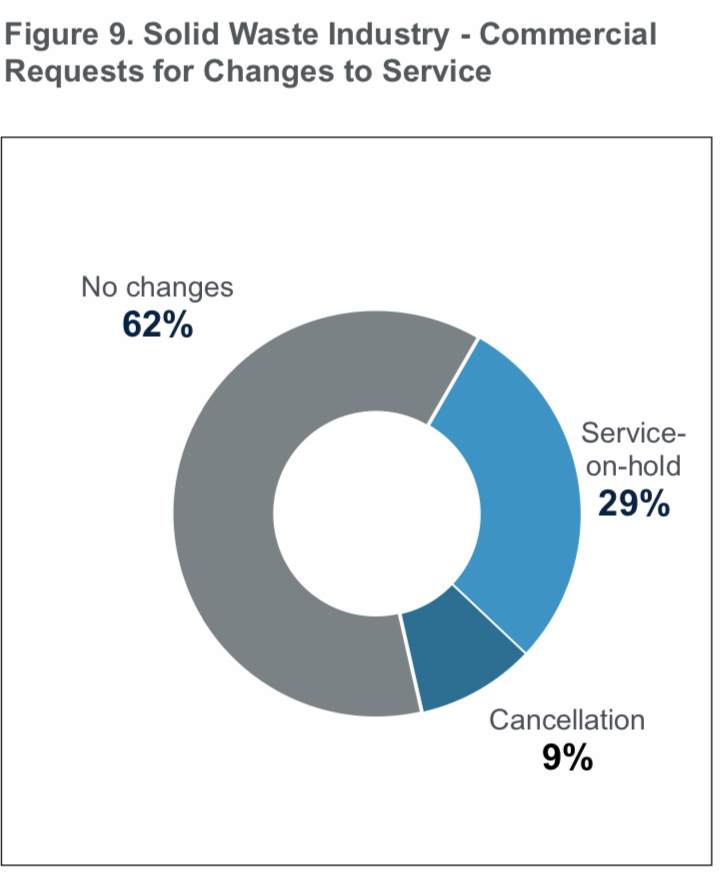 What is not clear is that of the two-thirds that did not seek a change, how many are closed and did not call?

Permanent roll-off business: Less than 60 percent of respondents experienced a reduction in volume while 44 percent reported volume as flat (32 percent) or up (12 percent). 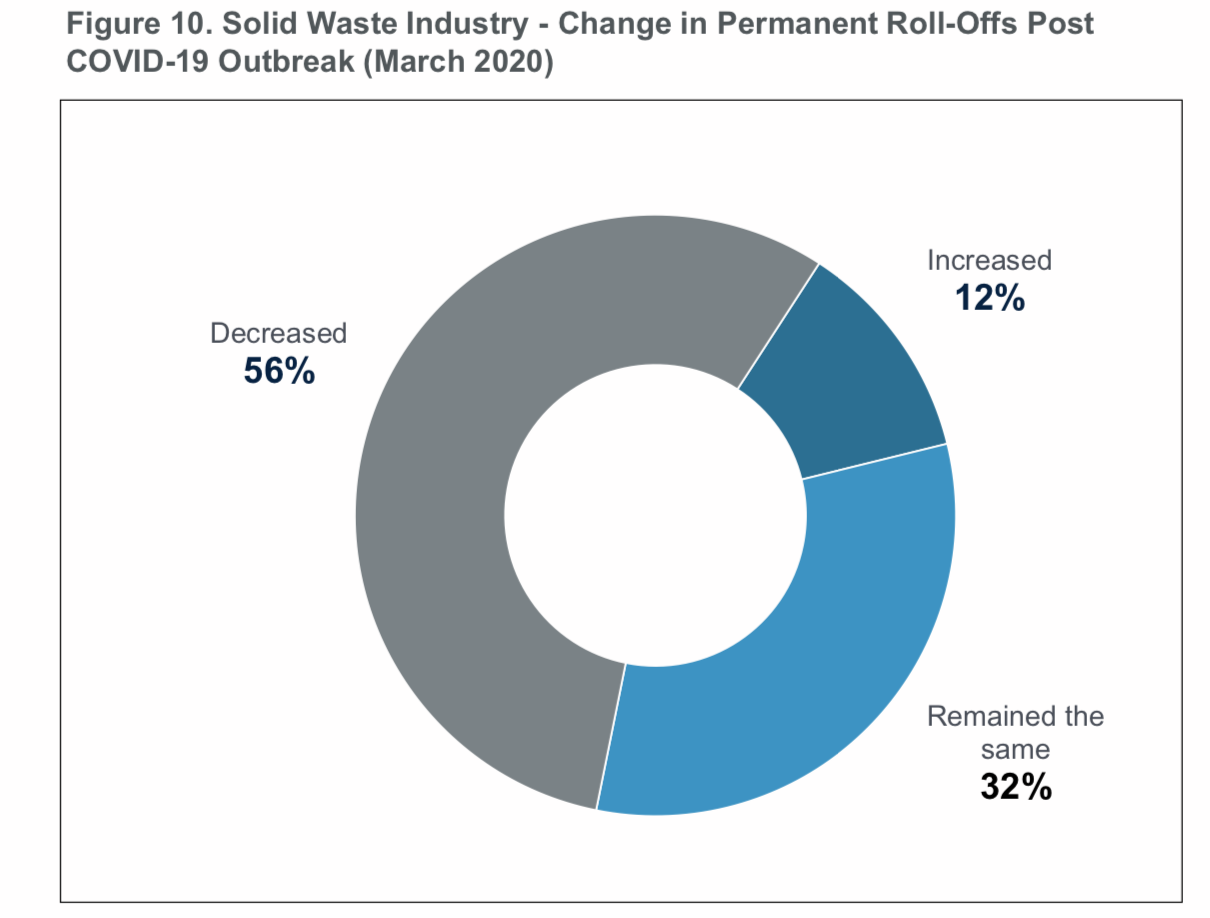 Across the customer base 27 percent had a volume decline greater than 25 percent. Only 5 percent of the customers sought to cancel and 24 percent requested service on hold. 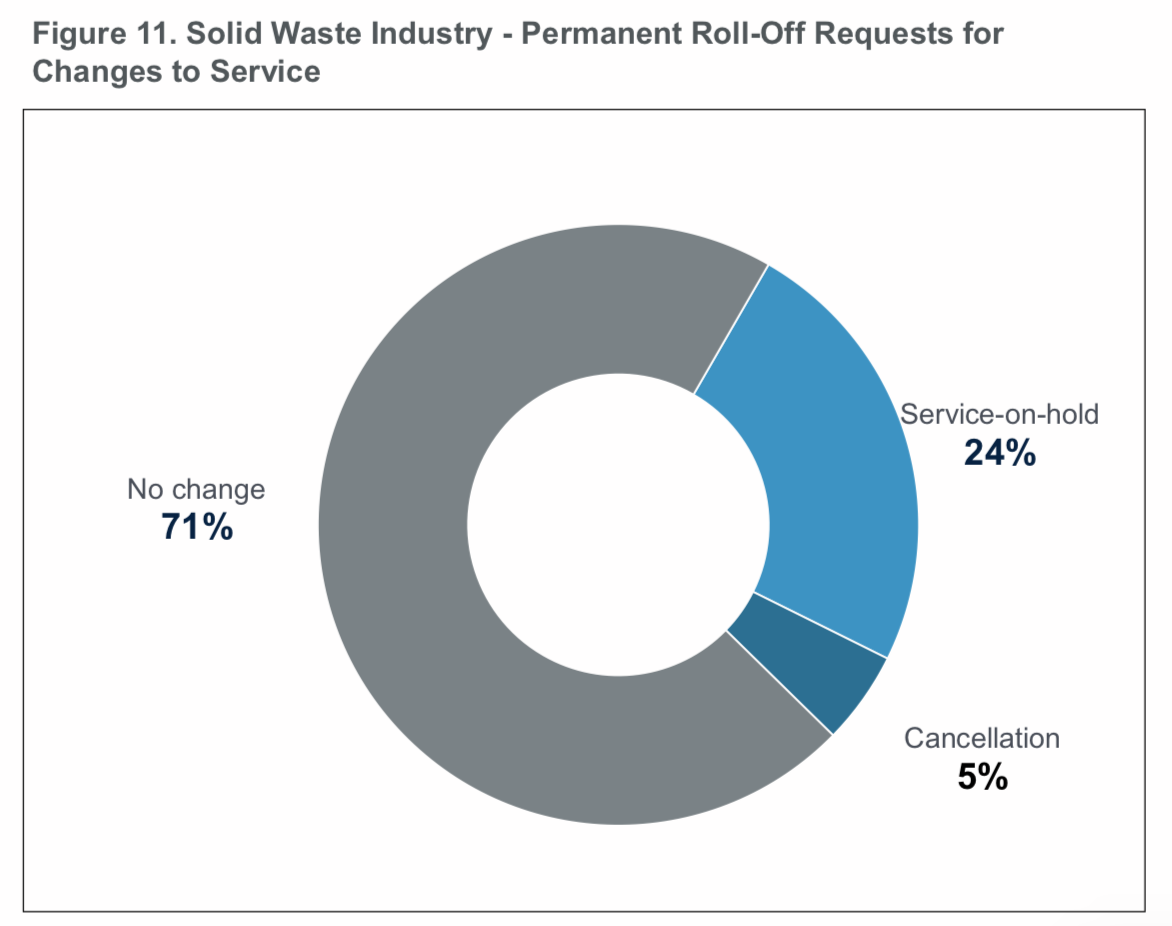 We did not expect there would be more than 20 percent of permanent roll-off customers holding service, although with two-thirds of the population under a stay-at-home order, perhaps 20 percent is good.

Temporary roll-off: Two-thirds of respondents reported a reduction is in roll-off pulls, or holds. 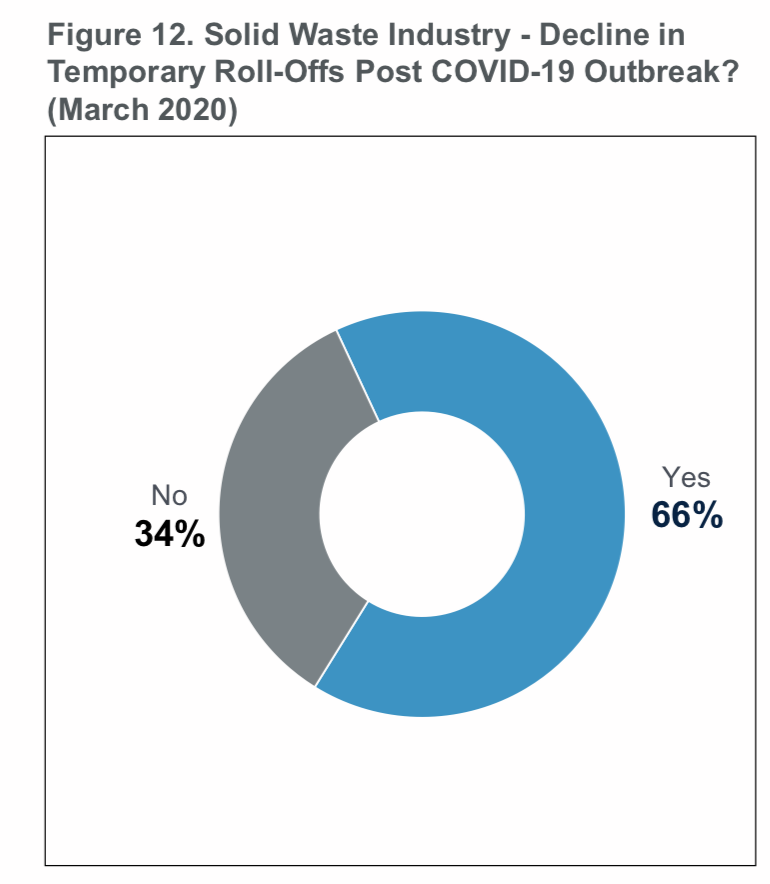 The end-market mix correlates well with the reduction in pulls, with 66 percent in residential (27 percent) and commercial construction (39 percent) 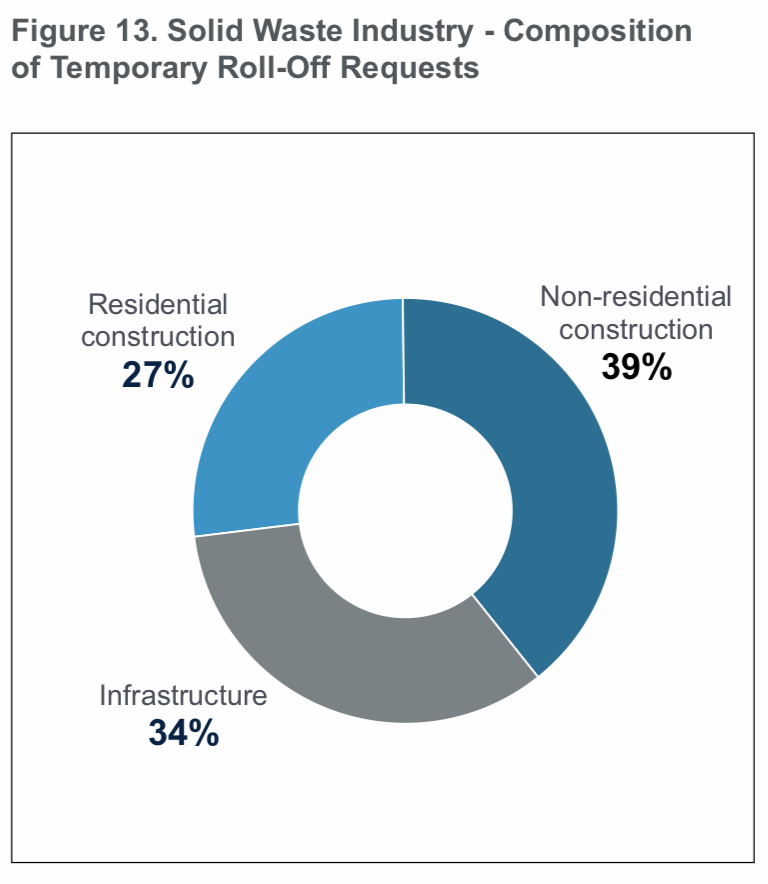 The remainder is infrastructure that has held up well through the Great Shutdown. Within the responses 45 percent indicated a decline in roll-off pulls of 20-50 percent. 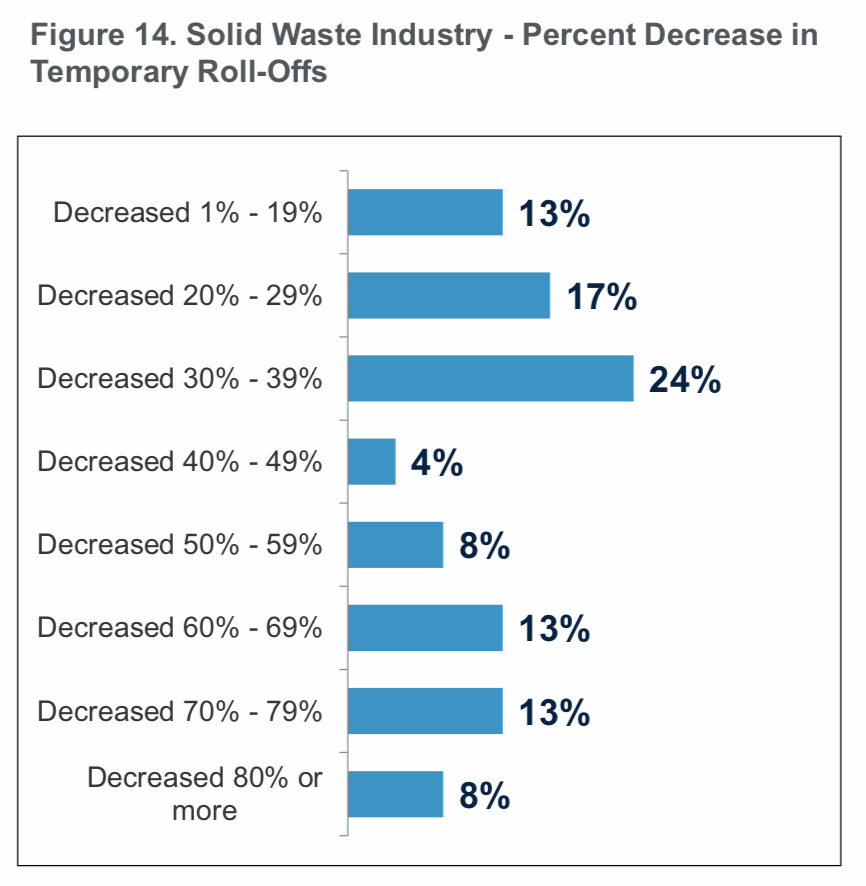 It is no surprise that only infrastructure saw limited disruption in business activity.