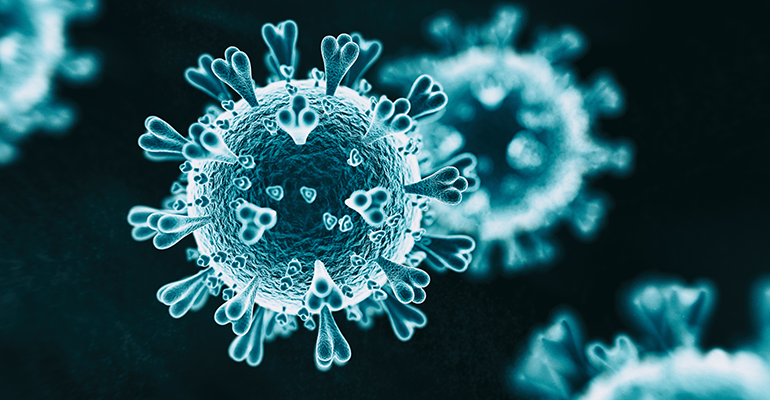 Michael E. Hoffman of Stifel calls for a steady return to normal for the remainder of 2020.

Like many others, the waste and recycling industry is in uncharted territories. Though deemed essential, the industry is facing a steep economic impact from COVID-19, leaving many with unanswered questions and concerns like when will things get back to normal, and what should be done in the meantime?

To help answer those questions and more, industry expert Michael E. Hoffman, managing director and group head of diversified industrials at Stifel, provided his outlook during a webinar on April 2 hosted by the National Waste & Recycling Association and sponsored by WasteExpo.

Hoffman’s outlook included his assumptions of the economic impact and what solid waste should focus on now and post COVID-19.

Currently, "what we’re getting is the equivalent of a full recession compressed into weeks and months, as opposed to a long, slow process of that recession having its gradual and steady impact on the economy," said Hoffman.

"Our particular assumption about what’s going to happen is the pandemic itself will be relatively short lived," he said. “So, we believe we’ll be back to what I call 'a sense of normal activity by summer.'" This will be followed by a steady return to normal for the second half of 2020.

But until that point is reached, Hoffman said the second quarter will be "shock and awe."

"I think you’re talking about double-digit volume decline in the commercial/small container world before we’re done in the second quarter, which would be April, May, June. I suspect April and May are the worst, and if we’re really back to some sense of normal, June will start to show signs of recovery," said Hoffman.

But some commercial businesses might never make it back, he said.

A way to think about the outcome of COVID-19, he said, is to "think back to the Great Recession and your own experiences through that timeframe." How much business did you actually lose in commercial over three years (2008-2010)? That could be what you lose in total before all this is done, he explained.

In the meantime, he said to focus on stakeholders. Make sure employees are in a safe working environment, fill open positions and cut overtime. Check in with customers—don’t be afraid to suggest changes, and don’t let them cancel. Instead, move to service on hold.

Then, possibly by June, Hoffman said "theoretically" every customer that went to service on hold and reopens must have a trash service resulting in a step up in revenue. And then, when consumers are comfortable spending money again, there will be more activity.

Four weeks ago, before COVID-19, Hoffman said there was an optimistic outlook for 2020 with strong recurring pricing, lots of potential mergers and acquisitions and more free cash flow, all thanks to a fully engaged consumer.

"U.S. consumers like to spend money, and it was clear they were doing so at a steady, consistent pace that was helping drive activity," he said.

A key data point to watch that indicates when consumers will start spending money again is to look at the housing market and new construction.

"To me, the homebuilding environment is the canary in the coal mine relative to sentiment and particularly with the consumer. I personally don’t believe garbage is the first derivative of housing play," said Hoffman.

He described it more like a "Field of Dreams" scenario.

"If you build enough houses, household formation will lead to new business formation—comes with a drycleaner, a Starbucks, maybe you need a new school, a hospital—that tends to be 10-to-15-year type customers, commercial business, very repeatable, very good margin," he said.

To put it in some perspective, Hoffman pointed out that in all prior recessions going back 60 years, except for this last cycle, homebuilding had a high demand, so housing had a very rapid recovery.

"Why they’re my canary in the coal mine—a builder will drop a hammer and stop building instantaneously if they see buying stop. And while we’re not building much housing today on speculation, most of it is dedicated to a buyer," said Hoffman.

In the last cycle, Hoffman said homebuilding rose to 1.2 million then spiked to the 1.5 million to 1.6 million range in the fourth quarter and stayed in that zone in January and February 2020, sending a "clear message about the underlying consumer. Rates have gotten attractive; housing prices have settled back to an attainable level." 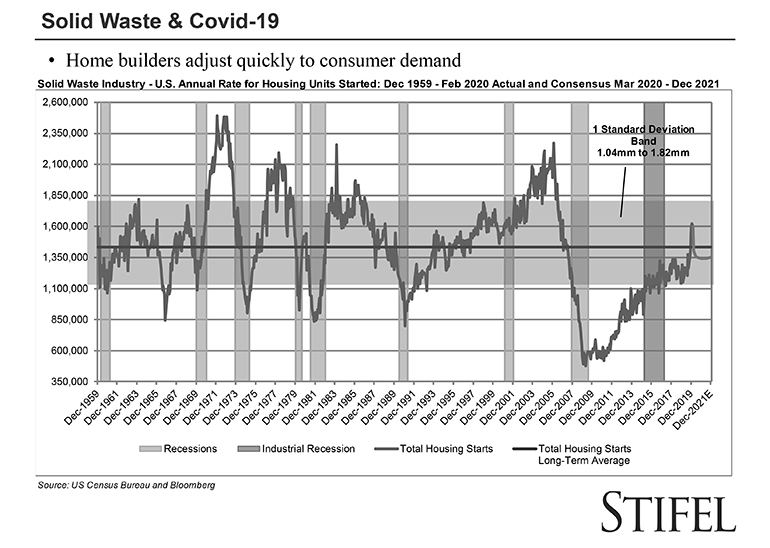 "I think this will be the interesting data point to watch," said Hoffman. "Housing is going to go down, but I don’t know how much it will bottom. [During the Great Recession,] we bottomed in the 600,000s. I don’t know if we get down that low, but it’s going to go down, deep. It’s going to have a volume impact. And then, it potentially begins a recovery. Will it recover like it has historically prior to the Great Recession, or do we get a slow gradual?"

"If we get a recovery that looks like the prior 60 years, except the Great Recession, that sends a very powerful message about where the consumer is and that will be good for garbage as we look out," he added.

Using 2021 as a starting point, he said to fine-tune the business model around what really came back relative to the commercial market and consumer engagement.

"If you get a rapid recovery in housing, I think you have a pretty optimistic view of how the consumer is stepping back into spending mode," he explained. "If you have a slow recovery and housing start, then you want to gauge how you think about adding cost in the business with that in mind, which would suggest you take the lessons learned from the Great Recession."