Planet Aid’s national headquarters in Elkridge, Md., was the first stop for a delegation of Russian experts on a three-week tour exploring waste and recycling techniques throughout the United States.

Sponsored by the U.S. State Department with the objective of receiving broad exposure to the best practices in waste management in the U.S.,  the seven-person group visited Planet Aid on Nov. 17 to see firsthand how the nonprofit organization collects, recycles, and redistributes used clothing and other textiles.

“We were highly honored by this,” says John Nagiecki, Planet Aid's communications director. “It caught us completely by surprise but we were very happy to give them their introduction to what we feel is a very important part of recycling in the United States, and one that's been neglected and that we're trying to make more progress in.” 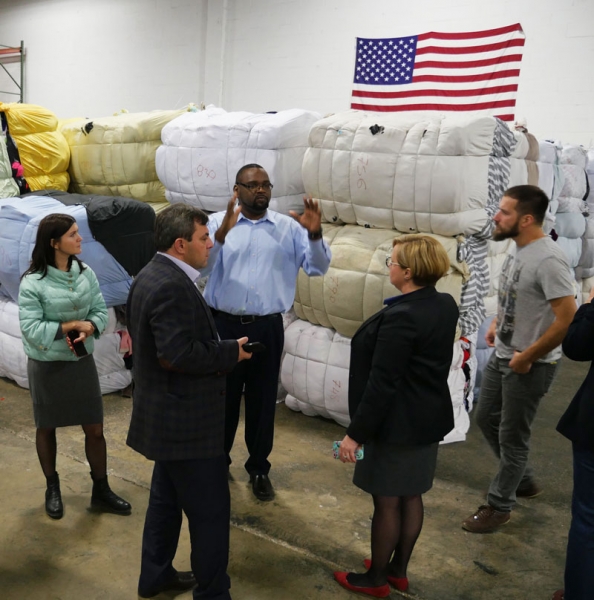 According to the U.S. Environmental Protection Agency, an estimated 85 percent of unwanted clothing is thrown in the trash, filling up landfills with reusable materials and contributing to greenhouse gas emissions.

Planet Aid’s leadership team gave the delegation a tour of its 52,000-square-foot warehouse and sorting facility to illustrate the process that allows them to collect a hundred million pounds of textiles per year through its expansive network of 20,000 yellow bins located in 22 states. Acceptable textiles include clothing, shoes, bedding, linens, towels, hats and gloves, among other things, Nagiecki says.

“Our net proceeds are donated to help impoverished communities in developing countries,” he says. “We work in the areas of agriculture, health promotion and disease prevention, and education.”

Armed with an interpreter, there were no communication barriers during the visit, Nagiecki says. “Not surprisingly, many of them spoke English,” he says.

Many questions centered around the iconic collection bin, which is always positioned in convenient and easily accessible locations in the community such as school, church and shopping parking lots.

“They wanted to know everything from how we designed the bin to how the chute worked and safety features built into it,” he says. “They spent a lot of time around that bin. They wanted to know how much they cost and how often we maintain them both in terms of the paint on the bin and our other graphics on it and how we service them, how often?

“They were a very eager and inquisitive group,” he says. “We had a very fruitful discussion.”