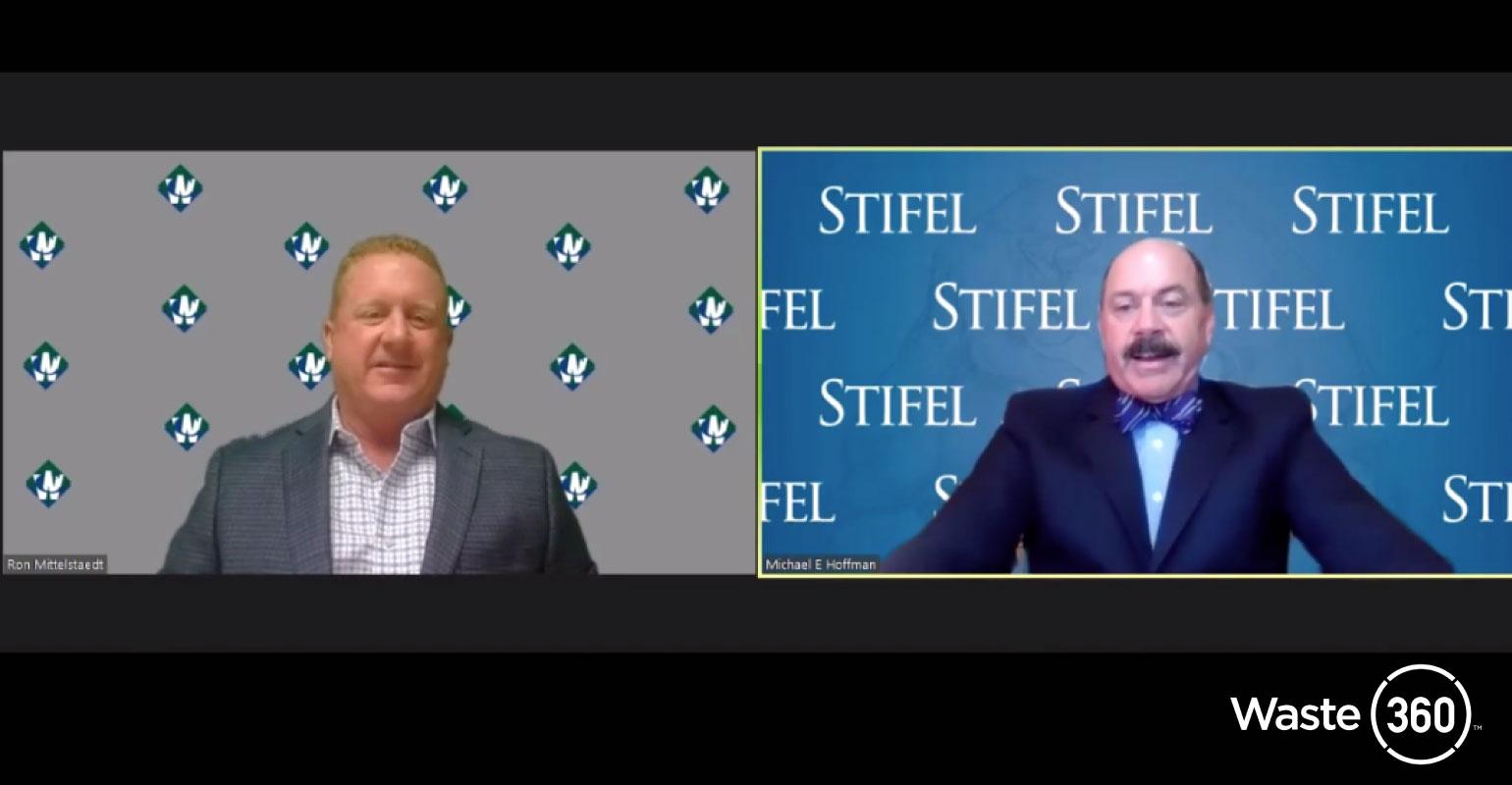 The Waste360/Stifel Investor Summit ended on a high note with a candid conversation with Ron Mittelstaedt, chairman and founder of Waste Connections. Michael E. Hoffman from Stifel welcomed back Mittelstaedt in what was his first foray back into the industry limelight in 18 months.

Mittelstaedt talked about his fascinating 30+ year-journey in the solid waste and recycling industry. He spoke fondly of his mentors, the importance of servant leadership, what surprised him along the way and what he thinks lies ahead.

Hoffman asked him to expand on his storied career and to share his learnings from each decade. Mittelstaedt spoke about his post-college start doing  sales and operations for the transportation sector and then onward to Browning-Ferris Industries (BFI) in sales and development. After nearly 10 years in the business, an opportunity to build Waste Connections came along and his experience helped form the philosophy he had for Waste Connections.

Mittelstaedt said that fundamentally the business of waste is very similar today as it was 30 years ago. Although he did say that a lot has changed around the business of waste. He walked us through the dramatic changes in landfills, the public company footprint, recycling and technology.

He took us back to the late 80s/early 90s and said that the reality was that landfills would be a much different cost structure than they had been previously. He said that, “Back then, it cost around $20,000-$40,000 an acre to construct an unlined landfill. Since 1994, you’ve seen an escalation of the cost to own a landfill. For comparison, it now costs anywhere from $400,000-$800,000 per acre to own and operate a landfill today. And we went from 8,000 landfills being open to approximately 2,200-2,300 landfills open today.” That is a massive change.

The public company space was different 30 years ago as well. He said that back then, there were two major public waste companies with a dozen or so others waiting in the wings. And then there were more over the years and ultimately, after much consolidation, there are about four major public companies today, plus one large regional player.

Recycling and technology will continue to evolve

The first curbside recycling program started in the 80s and recycling has stepped up significantly since then. He noted that the last decade has marked a huge elevation of recycling within the industry. Recycling was also one of the areas that surprised him the most over the years. He said that he did not think that anyone thought that we would be shipping 2/3 of our materials elsewhere, especially to China. And then no one thought that China would turn the off switch to full stop. He shared that the industry certainly knew the model was not sustainable, but that it took China’s actions of upending our recycling practices to make us address it. He said we will continue to see recycling evolve and that technology (in processing and collections) will allow things to be more efficient over time.

Speaking of technology, it was another area that Mittelstaedt noted that changed dramatically. He said that the first side loaders rolled out in the late 80/early 90s and now automation allows us to have one-man routes today and that more is on the horizon.

A servant leader is born

Mittelstaedt had quite a few mentors and he spoke highly of those within the waste and recycling industry. But one influence outside of waste helped to shape him into the leader that he is today. He said that he met Ken Blanchard, best-selling author of The One-Minute Managerand The Servant Leader, in 2004 and it helped him see the immense benefits and dividends of servant leadership.

He employed the philosophies and the people-first strategies of servant leadership and has not looked back. At the time, Waste Connections was dealing with turnover rates of 34%, which was not unusual for that time. However, Mittelstaedt knew the company needed to do better. They did exit interviews with the employees that were leaving on their own and uncovered two glaring management issues:

Mittelstaedt and his management team began to employ what they learned about servant leadership and made major headway. After four years, they made it mandatory and it brought together a team of like-minded leaders who really believed in it and saw the results in their markets. At one point, they reduced their turnover rate to 12% and continue to work hard to put their people first today.

Crystal ball insights on the election and M&A

Hoffman asked Mittelstaedt what predictions he has for the industry for the remainder of the year. He believes that the two largest public companies, WM and Republic Services, have made their last public deals. He also spoke about the upcoming presidential election. He said if Biden wins, there will be an immediate slowdown of acquisitions. If Trump wins, there will be a continuation of deal making. Only time will tell and as Mittelstaedt said many times before, “if you tell me who will win the election in November, I could tell you what will happen with M&As.”

Special thanks to Michael E. Hoffman and Ron Mittelstaedt for the enlightening conversation. The industry missed hearing Mittelstaedt’s thoughtful and genuine voice in the last year or so. We are glad to see he is doing well and we all welcome him back like an old friend.