Program Strives to Get Discarded Mattresses Out of Landfills

Tagged mattresses and box springs are being pulled off streets of Alameda County, Calif., thanks to a bounty-inspired pilot project to recycle this stream of illegally dumped, costly-to-cleanup waste.

As of Monday, 630 mattresses had been found and tagged in alleys, along railroad tracks and near low-income, multifamily complexes since DR3 Recycling, the nation’s largest mattress recycler, kicked off the program in January.

Motivated independent haulers and recyclers with trucks and an eye for salvage—otherwise known as the mosquito fleet—have driven 396 mattresses to the recycling facility for a nearly 63 percent return rate and some fast cash.

“What we are doing is trying to find how many people who pick up an old filthy mattress that has been abandoned on the street and bring it in for somewhere between $6 to $12,” says Robert Jaco, manager of DR3’s facility in San Leandro, Calif., adding that he expects to finish tagging the project’s allotted 1,000 mattresses by mid-March. “The program is definitely working because it is getting mattresses off the street. If you pay people, they will do it.”

Jaco says he and another worker have been traveling throughout the county looking for mattresses that have been dumped out on the streets or alleyways and then fastening each with a tag that’s impossible to counterfeit that tells the finder “if you bring this mattress in you’ll be paid X amount of dollars depending on the size.” 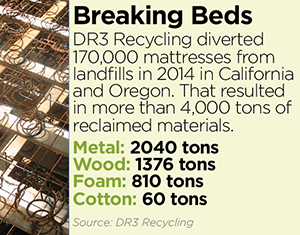 Funded through a $25,000 grant from StopWaste, a public agency reducing waste in Alameda County, the breakdown of financial incentives are: $12 for a king; $10 for a queen; $8 for a full; and $6 for a twin.

“Mattresses and box springs have always been considered hard-to-handle materials by transfer stations and landfills,” says Tom Padia, recycling director for StopWaste. “They don’t compact well. The springs sometimes break through and wrap around axels. As a result, most transfer and landfills have a separate per unit charge for mattresses and box springs that are considerably higher than the per-ton charge.”

“Then last year in California, an EPR (extended producer responsibility) bill for mattresses was passed which was co-authored by one of our local state senators, Loni Hancock, to challenge the mattress and sleep products industry to design and implement a take back program for mattresses and box springs,” he says. “It was largely prompted by issues of illegal dumping and the expense to local governments.”

But more than 90 percent of each mattress can be recycled into other useful products, according to the Mattress Recycling Council, a non-profit organization that will develop and operate mattress recycling programs in California, Connecticut, and Rhode Island. All three states have recently passed laws requiring mattress manufacturers to develop programs to manage discarded mattresses.

Padia says the results of the pilot program will be used to help develop consistent and realistic methodology for the statewide recycling effort, which is set to start in early 2016.

This type of bounty system “is something that they might consider as one of the tools in their toolbox to achieve targeted recovery rates of mattresses and help address the illegal dumping problem,” he says.