During the past 15 months, the national average price of post-consumer colored high-density polyethylene (HDPE) has doubled from 15.4 cents per pound, to the current 30.4 cents per pound (see graph).

Similarly, the national average price of post-consumer natural high-density polyethylene (HDPE) has also risen steadily from 33.8 cents per pound in July 2013 to the current 52.1 cents per pound. This is not quite the doubling price of its colored counterpoint, but nevertheless still a very strong upward trend. 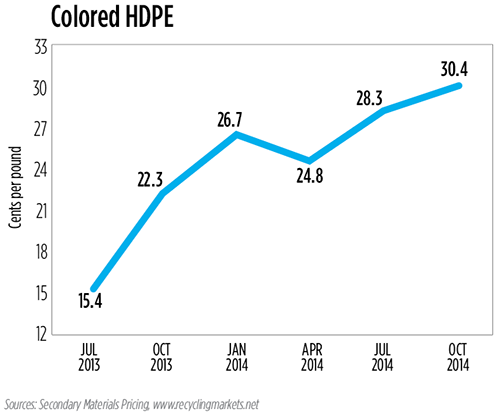 During the past fifteen months, the #8 News grade has dropped from a national median average high of $94 per ton as reported in July 2013, to the current average low of $72 per ton. These published prices are for mill-size bales, FOB dealers’ plants, as reported on the Secondary Fiber Pricing (SFP) Index.

Through this period, as reported in the graph, the average prices went through quite a roller coaster ride, from 94 cents a pound, down to 68 cents in October 2013, then back up to 86 cents in January 2014, finally dropping gradually to the current 72 cents per pound.

Meanwhile, prices for most post-consumer (PSI) high grades have remained constant in 2014. 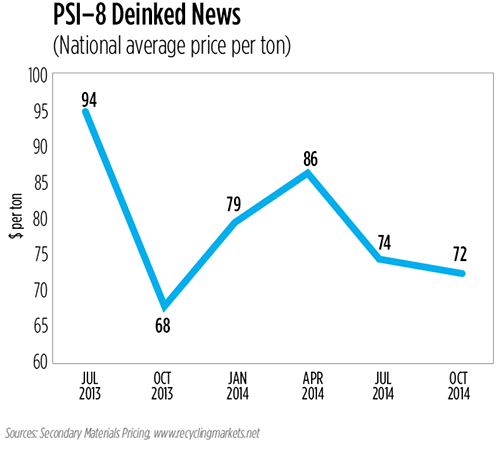 Robert Boulanger is president of Recycling Markets Ltd. and director of the Commodity Pricing division. He has extensive experience in the operation and management of recycling plants, and is a long-time publisher in the recycling sector. He can be reached at [email protected] or by phone at 330-956-8911 or 877-825-6555.

For more than 30 years, the company and its affiliates have focused on the management of company databases and commodity pricing for the recycling industry. In 2002,SecondaryFiberPricing.com was developed as the first industry online format to publish real-time pricing for 18 PSI grades of recyclable paper. SecondaryMaterialsPricing.comwas launched in 2004 for postconsumer Plastics, Cans and Glass. Online members have instant access to more than 10 years of historical data.