Once known as an environmental steward for its “bottle deposit law” in the 1970s, Michigan is determined to double its admittedly dismal residential recycling rate by April 2016.

The state lags “woefully” behind neighboring states in the Great Lakes region and the nation with a recycling participation rate of 15 percent, according to environmental leaders.

That sparked Gov. Rick Snyder to unveil an ambitious residential recycling plan in April 2014 that outlined a statewide effort. It involves a four-pronged approach focused on education and outreach, technical assistance, market development and expanding access.

Even though Michigan residents recycle more than 90 percent of returnable bottles and cans, more than $435 million in paper, metal, glass, plastic and other valuable materials are incinerated or sent to the landfill every year, says Matt Flechter, recycling market development specialist with the Michigan Department of Environmental Quality. 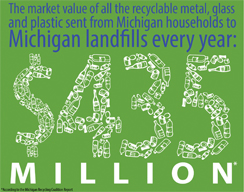 “The new plan has really brought attention to the economic importance of having a strong recycling program and the entire supply chain that is needed,” Flechter says. “Through that supply chain there are economic opportunities to grow Michigan businesses and provide additional services and collection programs for our residents as a way to support Michigan’s economy and the environment.”

The first step is to implement a measurement system to track recyclables, Flechter says.

“Michigan does a great job of tracking disposal but it does a horrible job tracking recycling rates,” he says. “We are working in the legislature right now to establish a recycling reporting mechanism … to look at the economic value of these materials that we are not able to collect right now because the collection infrastructure is not in place. We want to be able to benchmark our progress and to show the real economic opportunity that recycling presents.” 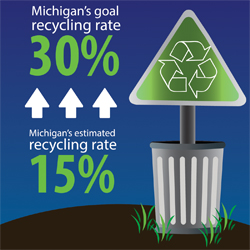 The reporting mechanism is critical because “you can’t manage what you don’t measure,” says Michael Csapo, general manager of the Resource Recovery and Recycling Authority of Southwest Oakland County and one of the nine members appointed to the Governor’s Recycling Council (GRC). The GRC meets every two months and in January issued a series of broad policy statements to “identify those items that are essential to the development of a metric-driven, cost effective strategy,” Csapo says.

“We recognize that we need experts to help guide our environmental quality and having the council advising us on those topics has been invaluable,” Flechter says. “They have provided some real serious recommendations for action and they are a dedicated group of people who are really rolling up their sleeves and supporting the important work that needs to be done to grow Michigan’s recycling rate.”

“One way to improve that is through a hauler mandate,” Csapo says. “If a company is providing trash collection for residential neighborhoods than it ought to also provide recycling collection. This type of mandate can be a viable tool to increase access for homeowners and Michigan residents. Csapo adds that all the communities within his authority have achieved the state’s 30 percent goal, and one community in particular—Farmington—has achieved a 50 percent diversion rate.

Flechter said the state has hired four new staff members who are in the field making connections with communities interested in starting or expanding recycling services.

“We are going where they are ready and where they are looking for support and information and technical assistance and to understand the existing funding mechanisms,” he says.

The state is providing $600,000 from its Community Pollution Prevention Grant Program to provide funding to communities to grow their recycling programs. Applications are due April 1 and grant award announcement will be made at the Governor’s Summit on May 5.

“Municipalities are strapped for cash right now and having difficulty expanding their programs so that’s why we need to identify the best tools from around the country and implement them (here) so they feel they are being supported at the local level,” Flechter says. “This has to be a partnership for it to be successful.”