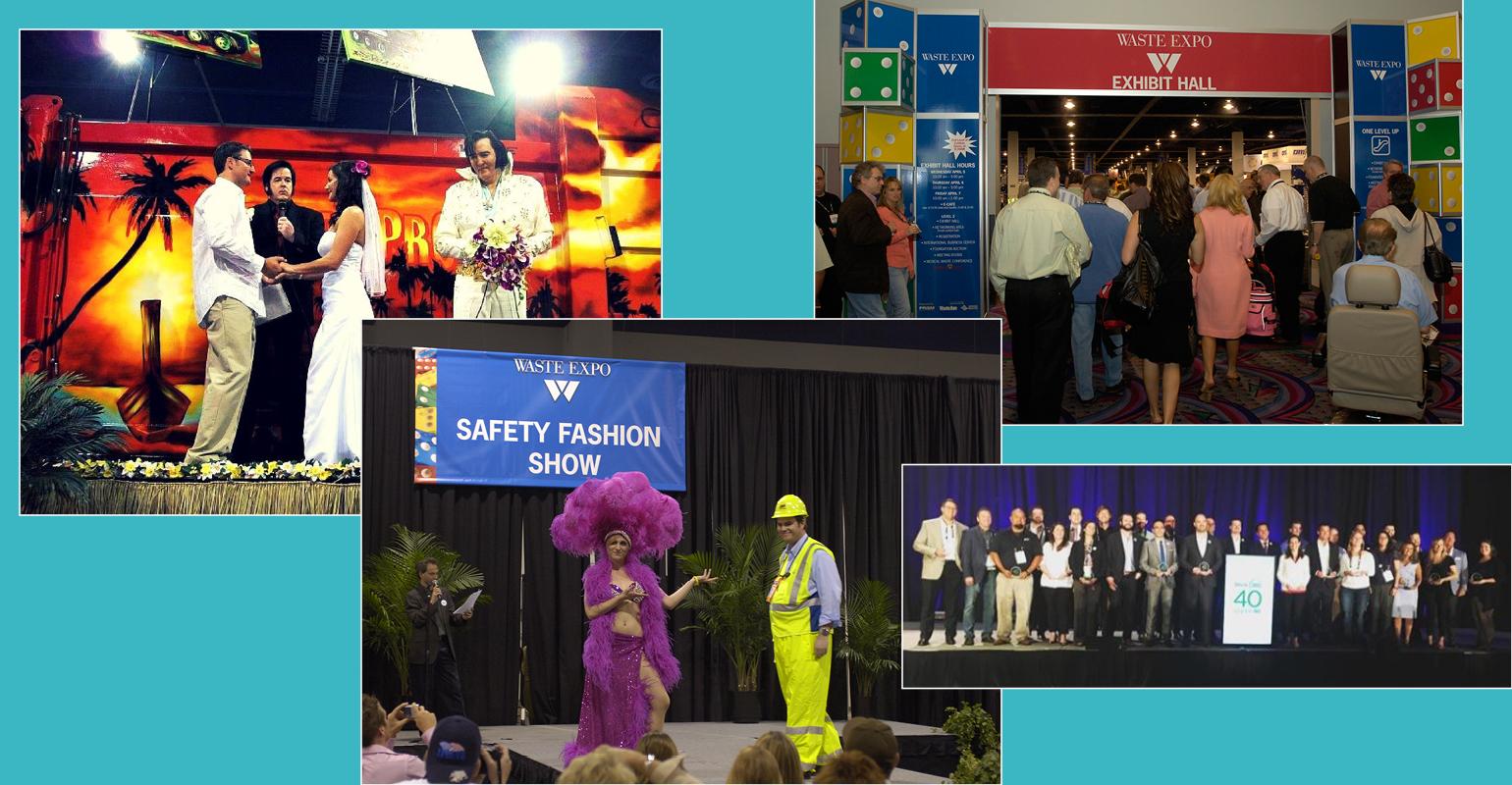 WasteExpo is celebrating its 50th anniversary this year, and to help us kick off the celebrations, we have asked our readers and longtime WasteExpo attendees to submit their favorite memories of WasteExpo. From combating a booth fire to making long-lasting relationships with others in the industry, these memories are ones that certainly will be remembered for a lifetime.

WasteExpo has long been the trade show where most of the industry connects each year. Many of my colleagues have described the show as a family reunion, and if you don’t show up, people will think you are dead. The show is woven into the fabric of the industry and is the premier place to connect, as well as demonstrate support of the industry as a whole. This was exemplified back in 1995, when the very first EREF charity auction was held at WasteExpo. It started with a single refuse body donated by Fred Leach and nine other items. The first auction brought in a little over $300,000. Since those humble beginnings, the auction has grown into the waste industry’s largest charity fundraiser, raising nearly $2 million in 2017 to benefit research, provide scholarships and support student internships. WasteExpo is an event that not only serves as a platform for business growth and interactions but is also the place where the tremendous generosity of this industry is highlighted. Cheers to a great 50 years! There were some interesting things that took place over the years, but one of the most exciting things for me was getting to watch the show get set up. We would arrive on Friday and make sure that all the crates and boxes with our stuff were there, and in a matter of hours, we would put our booth together. In the early years of WasteExpo, we had a 20-by-20-square-foot booth, and we eventually expanded to a 50-by-50-square-foot booth. Now, I think we are at a 40-by-40-square-foot booth.

I also enjoyed meeting other people in the industry and attending the breakfast that took place on the last day of the show, which was sponsored by Rita Ugianskis and the Penton Media group. At that breakfast, we would discuss the highlights of the show, both good and bad. That was really where I made a lot of my relationships in the industry.

One of the craziest moments was the electrical fire that happened at one of the WasteExpos held in Dallas. At about 1:30 a.m. before the show began, an electrical fire broke out at one of the booths. The convention center was totally full of water, but Rita and her team did an incredible job with the cleanup. You honestly couldn’t even tell that there was a fire by the time the show floor opened. The booth actually belonged to one of Schaefer’s competitors so there were a lot of jokes between us and that competitor about that incident. When WasteExpo first began, there weren’t enough attendees and exhibitors to fill up the convention center in Chicago. The industry wasn’t even really an industry at the time. It was a small show, and I think I attended my first WasteExpo in 1969 when I worked for a company called Koehring.

Over the years, my primary motive of attending the show was to network and stay on top of the new technologies that were entering our industry. All of the cities and states in this nation have different laws, rules and degrees of enforcement so it was great to be in the know of how other cities and states were managing waste and recycling and what technologies they were using.

There was always a lot to see at WasteExpo, and it was exciting to see the show grow year over year. To some extent, I know the show was constrained and limited to where it could take place because of large equipment that exhibitors wanted to bring in.

The tradeshow has been instrumental in introducing new ideas and concepts. At first, a lot of the products introduced didn’t have any changes to them for like 10 to 20 years, but fast forward to 2010-2017, more product offerings are becoming available and products are being introduced at a faster pace.

WasteExpo still has an educational component, which I think is great. That component offers learning opportunities, networking opportunities and it encourages discussions about important topics in our industry. Gene Wingerter, former executive director of the National Solid Waste Management Association (now the National Waste & Recycling Association). He served in that role for 26 years and prior to that was the group’s technical director. He has attended the last 45 WasteExpos consecutively.

One person who was critical to the show’s success was Jeanne Hayes.

Jeanne joined the National Solid Waste Management Association in 1968 as its first director of meetings and in the next 17 years helped WasteExpo grow before retiring in 1985. (Hayes then served as executive secretary of the Detachable Container Association for 10 years and continued to work as a consultant on WasteExpo. She passed away in 2014 at age 94).

She was known as being right to the point. She didn’t play games. She was on the road organizing contracts, working with exhibitors and getting space organized and sold. By the fifth or sixth year, we had a core of more than 100 exhibitors.

She had all the wisdom and experience.

There was one very difficult time around the fourth of fifth year with a labor strike in Chicago. She had to get it resolved and got it resolved well.

It used to be the big marketing effort for Jeannie to get Caterpillar, Heil and others to put a substantial amount of equipment on the show floor. So, you would see this beautiful, colorful display of iron ... In the early years, it was a showcase, and it was a nice draw for the press to come in and see what our industry was about.

The other thing I can tell you about WasteExpo is that it was a hub. It was where you found out who was doing what, what works and what’s practical. Key in the early days was having Browning-Ferris Industries, SCA Services, Waste Management and two or three other big players become active participants. Smaller independent companies had a chance to see what the big boys were doing.

There’s also a lot of healthy competition that takes place, and a lot of that is due to the show. It has been an excellent incubator for new companies and new players that want to get into the industry and invest in industry. Consolidation in the industry helped fuel the growth of the show.

As these industry groups began consolidating, they wound up sending managers from all their divisions to the show. So, independent contractors from every corner of the country who may not have attended a trade show in the past were attending as their division’s representative after being bought.

They also took a lot of space at the show. The shows were a very good place to make contacts for future acquisitions. In the early 1970s, when there was a feverish consolidation going on, the show became a major meeting place for these national public companies and these few thousand contractors who would all come to the show at that point. And a lot of contacts were made as result—contacts that resulted in acquisitions.

Then, as the years went on, the companies became more discriminating as to who would be authorized to attend the trade show. So, there probably came a point where there was a representative sampling, but not every single division that had been an independent company would be represented at the show. Chaz Miller, longtime veteran of the waste and recycling industry and former director of policy and advocacy for the National Waste & Recycling Association

One thing that jumps to my mind is the way exhibitors reflected trends within the industry. I can remember shows where the moving floor trucks and long trucks first appeared. It was new, and there was a lot of interest in it. There were a couple of shows where the rise of recycling created an enormous number of previously unseen things. One year it just felt like every other vendor had a recycling bin they were selling or showing. And then a couple of years ago, there was the surge of composting and organics. So, it’s always a barometer of what the hot trend is in the industry—whether it’s legislative, customer demand, you name it.

There’s also a lot more excitement in the exhibit halls these days than there used to be. Now, you can serve food and beer in exhibits in ways you couldn’t in the past … It just makes it more vibrant.

The show really feasts on small- and medium-sized haulers looking to buy things. You need all those haulers that want to go to a show and that want to make those connections. The fact that it’s grown shows the audience is still there.

I’ve never been to a dull show. I’ve always loved going. It’s always a lift. You see new stuff. You see old friends. You make new friends. It’s a great way to learn about the industry. The networking opportunities are so intense. I don’t recall ever leaving WasteExpo feeling that I wasted my time. I just don’t ever recall that. I have been in the waste consulting business since 1998, and I attended WasteExpo back when it was held in Chicago at McCormick Place!

I attended the show primarily to find new recycling and equipment vendors to apply to my current and future clients' needs. Whenever I can find a new home for the unique and vast waste streams of my client base, it is pure gold. Taking any waste out of the landfills is always a win-win-win.

I plan to attend WasteExpo 2018 in hopes of finding a certain manufacturer to help my clients with a new medical waste technology that I am involved with.

Getting out of the office, meeting new and old business contacts and placing a face to a name is what this is all about. Relationships are the name of the consulting game, and my clients always benefit from my time walking the floors at WasteExpo. While working at a nonprofit called the Work Training Center in 1981 and working with people with developmental disabilities, I was asked to drive the flatbed "recycle truck." This was a newspaper recycling route in Chico, Calif. It started out small, but five years later, we were collecting 150 tons per year in a town of 50,000. I came to California from New Jersey, and back then when I told my family what I was doing out in California, they did not understand. "Oh! You're a garbage man," they said. It took a few years for them to catch onto this new occupation. I have now been here recycling for 37 years and have seen the massive changes to our business through all those years. I’m happy to have made a difference in this world. Jerry has attended many WasteExpos over the years, sharing his knowledge of the industry with others. At WasteExpo 2015, NEXCOM debuted its VTC 7230 Fanless In-Vehicle Computer. Intel's 5th generation Core i3-5010U Processor had just launched that year, and NEXCOM was proud to feature it in the VTC 7230.

It was the ideal solution for AVL/GPS tracking, fleet dispatching, optimal routing and mapping, real-time data logging and dynamic scheduling. Have a WasteExpo memory to share? Please email your memories and photos to Waste360 Editorial Director Mallory Szczepanski at Mallory.Szczepanski@informa.com.