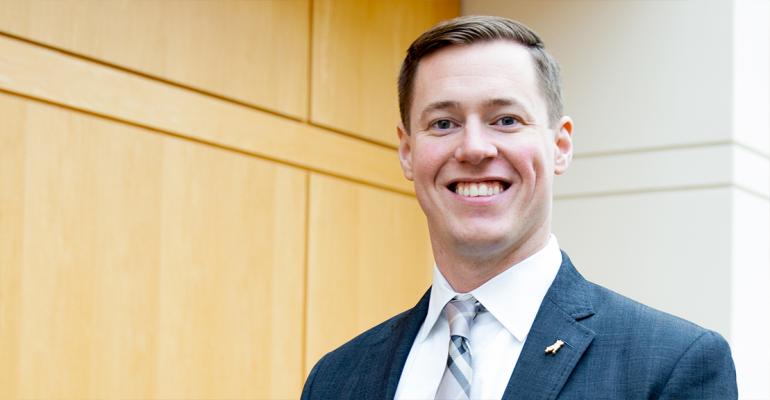 The Waste360 40 Under 40 award winner discusses how refuse fleets have changed over the years and why he believes electromobility is a sustainable, long-term solution.

Growing up, Travis Timmerman looked up to his father who worked at McNeilus Truck & Manufacturing Inc. and aspired to follow in his footsteps. In high school, he got the opportunity to do just that, and he’s been part of the waste and recycling industry ever since.

Timmerman learned the ins and outs of the industry at McNeilus before joining Mack Trucks nearly five years ago. At Mack, Timmerman has received a number of sales awards and climbed the ranks to manager of national accounts.

Timmerman was honored with a 2019 Waste360 40 Under 40 award and recently spoke with us about how refuse fleets have changed over the years and why he believes electromobility is a sustainable, long-term solution.

Waste360: You started your career in the industry at a young age. Can you tell us about that?

Travis Timmerman: I grew up in Southern Minnesota where McNeilus is based, and in high school, I worked for the local steel supplier to McNeilus called McNeilus Steel. There, I learned a lot about the materials and grades of steel, and I worked in the fabrication shop and built some parts like automated arms.

When I came out of college, I knew I wanted to do something in manufacturing. And I got to make that dream come true by working in the purchasing department at McNeilus, a company my father worked at for about 15 years. I think it’s any little boy’s dream to grow up and do what dad does, and I’m thankful that it worked out that way for me.

In my role, I started with procurement and quickly learned some of the products. I supported all of our aftermarket facilities in the U.S., and I was purchasing for about half of those branches to support their sales and services operations.

After doing that for some time, an opportunity opened up on the production side. In that role, I got to negotiate some contracts and do all the hydraulic purchasing. I also got to work with the sales group and got to know Frank Busicchia, now president of E-Z Pack and Continental Mixers. After having many conversations with Frank, it was clear to him that I wanted to do more, so I transitioned into a role in the sales associate program. I got to shadow a lot of the senior sales guys, work with some of the national accounts, work with the municipal guys, offer my expertise to some of the guys who maybe didn’t have strong knowledge about all of our products and work with the chassis group to develop strategies and programs to move completed units to customers instead of relying on chassis dealers to ship trucks in and do sales.

I was at McNeilus for about two years, and then a recruiter from Mack reached out to me looking for someone in the Midwest to work with concrete pump and ready-mix manufacturers, garbage truck manufacturers, etc. It was an exciting opportunity for me because I wanted to get on the road more, and there wasn’t really a territory with McNeilus at that time to do what I wanted to do. I jumped at the opportunity, and I moved to Chicago to diversify my background and expand my experience.

I worked out of a regional sales office, and the whole experience was a welcomed challenge for me. Since joining Mack, I’ve had a lot of good success, and I hope to keep building on that success in the future. 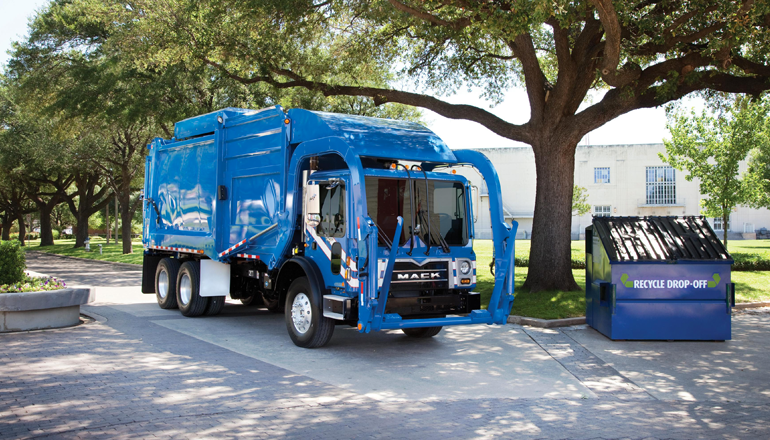 Waste360: Tell us about your role as manager of national accounts and your responsibilities.

Travis Timmerman: When I started at Mack, I was the region fleet sales manager for vocational equipment, where I brought technical expertise to our dealer network. Then, I got really involved with concrete pumps, which is a big business for Mack.

My first year at Mack was challenging, but during my second and third years, I was named regional fleet manager of the year and eventually promoted into national accounts. In that role now, I have fewer accounts and key accounts that I manage and work with, such as GFL Environmental and FCC Environmental Services. I also support some of our other national account managers who maybe don’t have as much of a background in refuse and work to bring in new accounts with companies we aren’t currently doing business with.

I believe in bringing value to all customers; it’s not all about offering deals on price or selling another truck. To us, it’s about helping customers retain drivers, run and maintain safer fleets, save on fuel costs, etc. We also work closely with leading body manufacturers to make a more seamless purchasing experience, and I think of all those things combined are what set us apart as a leader in the industry.

In the future, I would like to go through the National Automobile Dealers Association and graduate from its ATD Academy. It’s not as applicable to me right now, but it’s something I would like to do in the future because I’ll likely work with more dealers as I move up the chain. The ATD program would be very valuable to be in that respect, so it’s definitely on my to-do list.

Waste360: How do you think refuse fleets have changed over the years?

Travis Timmerman: Drivers are always going to be the biggest issue. Everyone is always hiring drivers because they are the most valuable resource in the industry today. In the general trucking industry, no one will tell you that they have enough drivers because everyone wants a driver. I think it’s more difficult for our industry to attract and retain drivers because our industry isn’t the most glamorous or most sought-after business, and many people don’t truly understand the trash business. In addition, the industry has a bad rap with safety, but we are seeing some safety advancements like radars, cameras and sensors that are helping to address that issue.

As we look toward other advancements, alternative fuel sources are on the rise. I think compressed natural gas (CNG) is a fad right now, and I don’t think it’s the longest-term solution. I think we need to invest in electromobility because I see that being a sustainable, long-term solution since the infrastructure is already in place.

In addition, at WasteExpo 2019, we launched a truck that’s the first fully branded, integrated, electrified vehicle for the waste industry. The truck uses our own technology through the Volvo Group, and I think advancements like that will change the industry because we understand what the needs are, the amount of charge/electricity we can put on a truck, what it takes to reduce a carbon footprint to make trucks quieter and more efficient, etc. 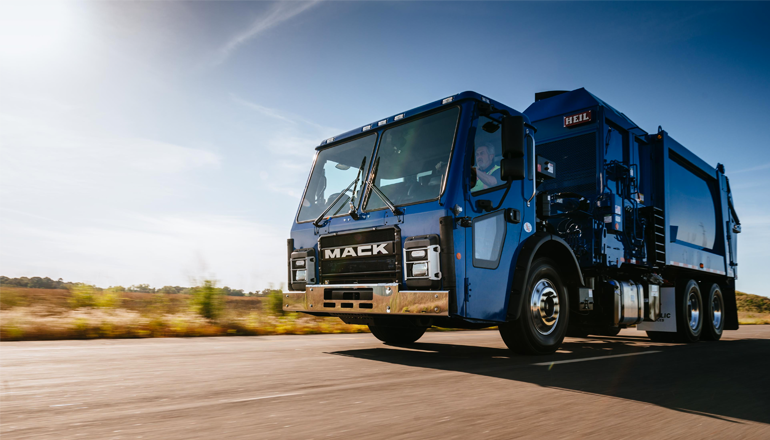 Waste360: Mack also announced that the City of New York Department of Sanitation (DSNY) will be testing the Mack LR battery electric vehicle. Can you tell us a little bit about that?

Travis Timmerman: New York City has an initiative that aims to have a certain percentage of electric vehicles in their fleet, and they’ve already exceeded that number with police vehicles, city trucks, etc. The difference between what those vehicles do and what our vehicle does is just the pure operations cycle. For example, we have to pack trash, haul a larger load, move more weight, etc., so the route and having a range to complete that cycle is what we’re trying to drive to. But if you look at how many trucks the city runs, it’s already maintaining a pretty green fleet and eliminating the need for diesel or CNG, which has a significant cost to it.

Electric vehicles are also more expensive upfront, just like cell phones and TVs used to be, but as they get smarter and better, they will come down in price just like other technologies have over time. The infrastructure’s already there—there’s electricity everywhere, and it’s just a matter of having a charging station, which is one of the biggest obstacles of CNG.

The refuse industry has been very forward thinking with CNG, and municipalities have taken the lead on that, but the issue then becomes where to sell old trucks because not everyone runs on CNG, how to get the capital together to get into this business and how to maneuver larger, heavier trucks on routes.

When you’re a fleet servicing a large city like New York City, you want to consider alternative fuel, and while I can’t speak for DSNY, we consider CNG a “right now technology,” and we believe electrification is the way to move forward to a cleaner and greener fleet. Like I said before, the infrastructure is already there for electric fleets, while CNG lacks infrastructure. You can’t just go to any gas station and fill up with CNG, for example, you have to go to specific filling stations to get the fuel.

Electric trucks is a coming technology and a work in progress, and I’m excited to be a part of something I view as cutting edge. 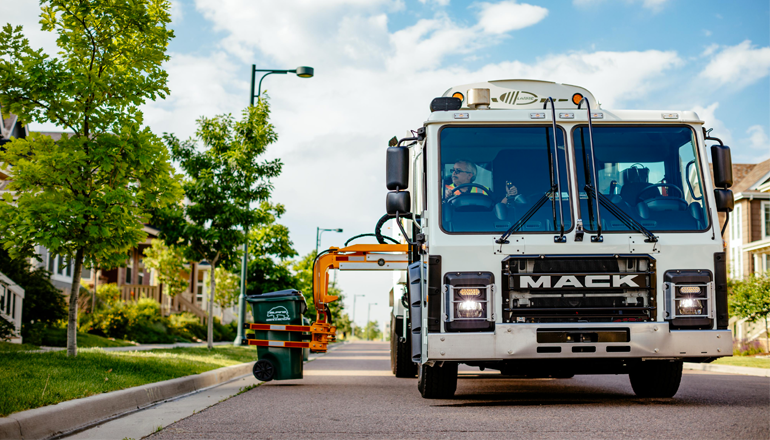 Waste360: If you weren’t working in this industry, what do you think you would be doing?

Travis Timmerman: Growing up in a manufacturing and farming community, I’ve always believed in building a product I can touch and see. I don’t think I could work in the service industry, and I don’t have a desire to sell insurance, banking or anything along those lines. For me, the fascination always has been going through manufacturing plants, seeing how you take different parts of steel to create a product and feeling proud of the finished product you’ve created.

I take a lot of pride in what we do at Mack, and a lot of people joke I bleed blue because I used to work at McNeilus and believe in what the company does, but it’s what keeps America working, it’s based in my hometown and it helped me launch the career I have today.

I really can’t picture myself doing anything else because I love what I do and those closest to me know that. My family and friends now send me photos of trucks they see out on the road and that truly makes me happy and proud.

Waste360: What do you enjoy doing in your free time?

Travis Timmerman: I grew up in Minnesota, so I like to be outside as much as possible doing activities like canoeing, four-wheeling and boating. I also consider myself an avid fisherman, and I like to chase around a little white golf ball every now and then. I also enjoy spending time with my family and my in-laws.