Impressions and Insights from WasteExpo 2019 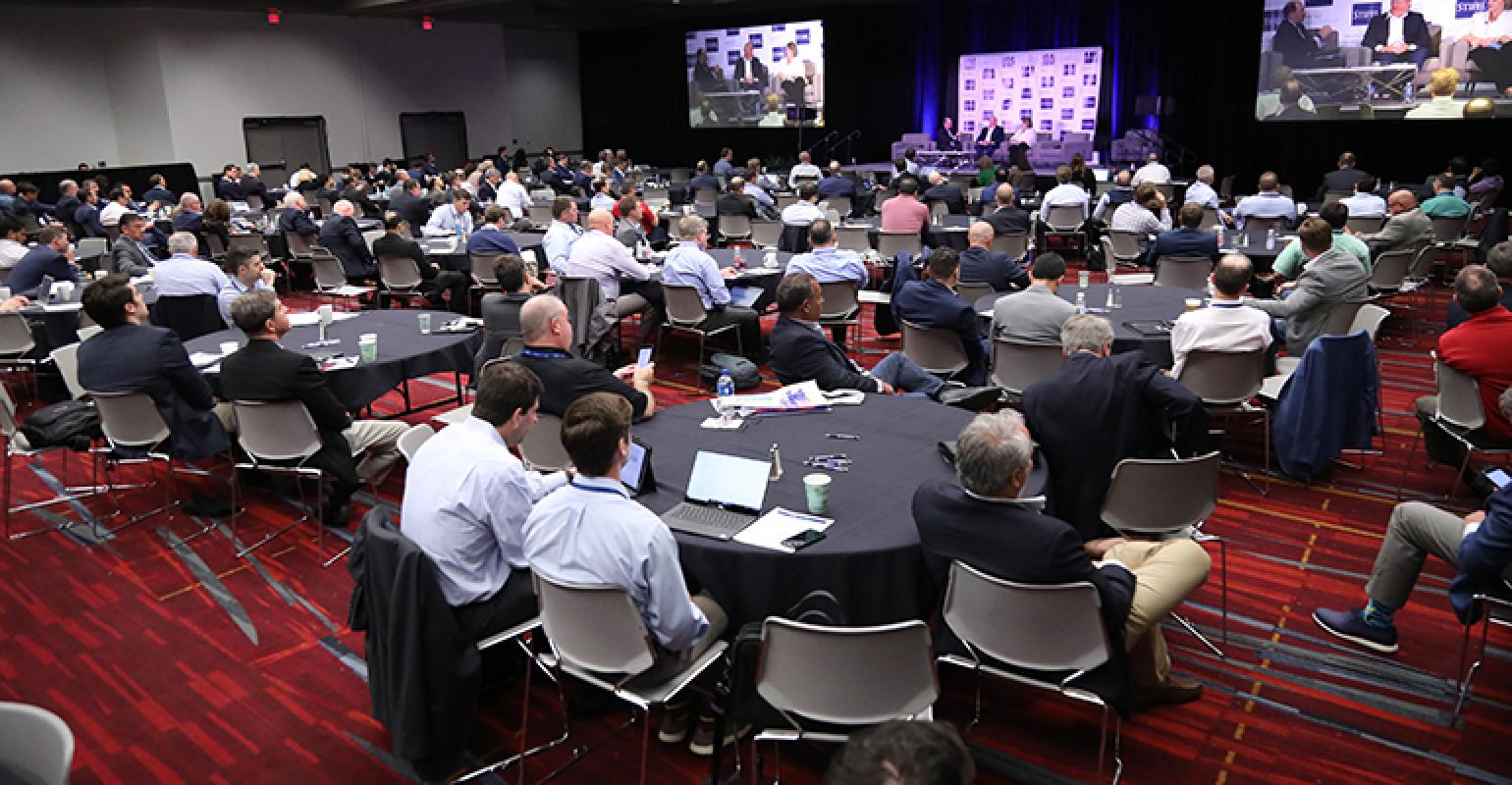 In this month’s edition of Business Insights, we focus on impressions from the show floor, insights from the CFO Spotlight Session and new industry and market data.

WasteExpo 2019 took place May 6-9 in Las Vegas. Once again, the education sessions and the Waste360/Stifel Investor Summit contained a wealth of information on key industry issues, but in this month’s edition of Business Insights, we focus on impressions from the show floor, insights from the CFO Spotlight Session and new industry and market data that was presented at the show.

Impressions from the Show Floor

WasteExpo 2019 was well attended with more than 14,000 visitors and more than 600 exhibitors. The floor was crowded and the mood was upbeat, if not ebullient at times. A number of the industry veterans we spoke with described the underlying solid waste business as “the best they’d ever seen,” and given the amount of years that generally encompassed, that was quite a statement!

Recycling is still a major issue, and on May 6, RISI came out with its May data, showing average old corrugated containers (OCC) pricing had fallen another $10 per ton sequentially from April, which puts it near 2009 low levels. Certainly, recycling is closer to a trough than a peak, but market participants now expect recycled commodity prices to be lower for longer, with perhaps no real relief expected until the fourth quarter or even early 2020. Despite the grim recycled commodity pricing levels (with seemingly no bottom yet), there also seemed to be a greater sense of acceptance than last year.

This year, we heard no speculation that China will come back, as opposed to last year, so all the discussion seemed to revolve around how contract restructuring was progressing, how municipalities were responding and how to lower operating costs and get cleaner streams at materials recovery facilities (MRFs). But bottom line, industry participants are taking comfort in the fact that the strength of the underlying solid waste business is apparently overcoming recycling headwinds.

Specific comments regarding price and volume were also fairly consistent. A number of players we talked to had suffered from extended winter or impactful weather through March but noted that when it cleared in April, volumes popped—indicating a normal, if not better-than-normal, seasonal upturn. Pricing increases are being driven by the recycling issues and cost inflation, particularly labor and landfill costs. Anecdotally, we heard of price hikes of 10 to 11 percent from some of the smaller private firms that had based their business model on higher recycled commodity prices, though those numbers were certainly not the norm.

The show floor also reflected the increased focus of the service providers on technology investment. In particular, equipment to automate and lower labor costs at MRFs was more ubiquitous. The Bulk Handling Systems booth, featuring MAX-AI, the artificial intelligence (AI)-enabled, positive sort robot was particularly crowded. WasteExpo also tends to be characterized by a lot of mergers and acquisitions (M&A) gossip, and this year was no exception, underscoring that M&A activity is occurring at an accelerated pace in 2019, in large part due to the increasing complexity of the business and the capital investment required as a result.

Five chief financial officers (CFOs) shared the stage in the Spotlight Session “CFO Insights: A Look at the Waste and Recycling Industry.” Echoing executives at the Investor Summit, the focus on people was front and center. Given overall labor shortages, particularly drivers and technicians, the CFOs noted that they now key into turnover statistics with laser focus and recruitment, and training initiatives are paramount. All agreed that if they could just bottle the enthusiasm shown at the National Waste & Recycling Association’s (NWRA) Awards Breakfast, it would aid the recruitment process tremendously, particularly with regard to getting more women and millennials into the business, which has become increasingly important given the aging demographic within the industry. Several noted that companies need to do a better job getting the word out that this industry is a great place to work. Related to this was the emphasis on safety. As one of the top five most dangerous occupations, attracting people to the business is more difficult, much less considering the human tragedy and the costs resulting from accidents and injuries. It was noted that despite being competitors, everyone coordinates on safety issues, sharing experiences and protocols.

Increasing customer focus was another recurring theme, and technology investments are being heavily targeted to that—both to provide a better customer experience and improve the ease of doing business with the service providers. The majority of sales and service is still done by phone, and increasingly customers simply want an app. Technology investments also are heavily tilted to improved safety features in the trucks (which will again aid recruitment) and increased connectivity between the cab and the customer. A number of the panelists also touched on landfills—the need to get a better return on them given their capital intensity, as well as the need to do a better job educating the public on the environmental positives of landfills, both in terms of being safe repositories for waste and a source of renewable energy from landfill gas. Simple diversion should not be the end goal!

On a related topic, it was frequently noted that sustainability efforts must make sense economically as well. It also was agreed that China’s National Sword was a wakeup call, and the recycling paradigm must shift, such that the risk is shared and is not entirely borne by the industry as was often the case in the past—contracts will continue to be restructured to be fee based, not commodity price based. Within the industry there is also more emphasis on the importance of the finance function itself and the need to invest more judiciously than in the past boom periods in the business. Finally, in answer to a question, all the panelists confirmed that their companies handle all recycled plastic domestically—they do not export to countries that do not have proper waste management infrastructure, a primary source of ocean plastics.

I moderated and participated in the education session “Current Business Trends Shaping the Industry: What You Need to Know,” and we talked about overall industry observations/drivers and first quarter trends, which will be discussed further below. Dan Butturini and Richard Sterner of Sterner Consulting presented and discussed valuation parameters in the industry and their valuation grid, which we highlighted in January’s Business Insights. Jim Thompson of Waste Business Journal presented a summary of his highly anticipated and long-awaited industry study. He is expecting to publish the entire updated overview shortly, but several highlights from his summary presentation included his new estimate of the size of the market, market share figures and tonnage details. He estimates the solid waste market in the U.S. is now $74 billion, up from $41 billion in 1998, implying average annual growth of 3 percent. He also broke out market share figures for the publicly-traded companies, private companies and municipalities. Of particular note, by his estimation, the publicly-traded companies now control 60 percent of the total market, while private companies and municipalities roughly split the remainder, versus breakdowns of 55 percent, 15 percent and 30 percent, respectively, in 1998. Additionally, he presented data on the size and handling of the waste stream. He put total municipal solid waste tonnage at 456 million, with 29 percent recycled, less than 2 percent exported, 66 percent landfilled and waste-to-energy accounting for the remainder. Also of interest to the audience were historical and regional tip fee figures, as well as annual remaining U.S. landfill capacity, also by region. And, of particular note, he also projected landfill capacity, or remaining airspace, out to 2023. Interestingly, after years of growth in the 1990s and relative stability since 2000, he now sees remaining landfill capacity beginning to decline, with a loss of around 15 percent from 2018 to 2023, and that does not include what may now be landfilled instead of recycled since China’s National Sword.

With regard to even greater, recent downward price pressure in recycling, there appear to be several coincident factors. Anecdotally, China appears to be tightening standards further and rejecting more material, while delays in new domestic mill capacity that will use recycled fiber as feedstock and slower box demand growth are resulting in bloated domestic recycled fiber inventory. On the positive side for the publicly-traded companies, M&A activity has kicked into high gear—smaller private companies are increasingly hit by recycling woes and cost inflation, but now must also contend with the increasing use of technology and digitalization in the industry. So, the question becomes more acute: sell or invest?