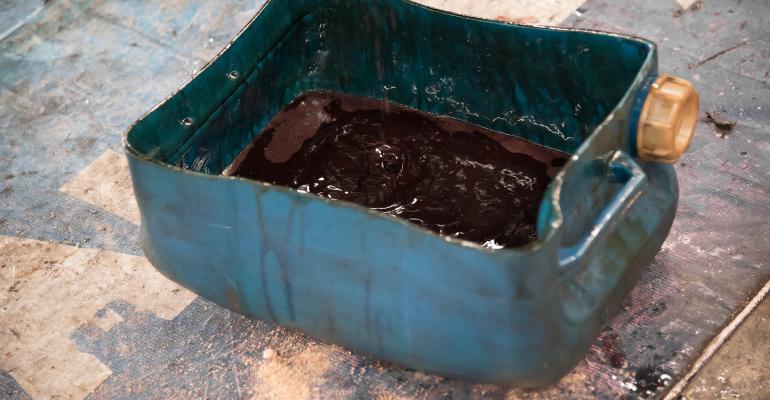 Part two of a three-part series this week discusses oil filters and highlights from a national used oil study.

In a multipart series this week, Rob Arner, consultant with Re-gain Enterprise, will examine the complexity of defining and regulating used oil and automotive byproducts. Read part one here. Read part three here.

The extent of filter recycling rates is questionable. For example, California’s recycling program can only get 7 percent. There is no data to make any national claim. On average, every 16 filters generate roughly a gallon of used oil.

There are reusable oil filters that are compatible with engines that use the one-piece sealed spin-on filter. No modifications or tools are required to install these filters on any engine that uses a spin-on filter, and they allow for the recovery of all used motor oil. The assembly housing is reused; only the paper element is replaced, and this can be easily recycled or burned for energy. If produced in volume, this filter could be manufactured for less than a dollar per unit. At the point of final sale, the replacement filter element would cost somewhat less than the current spin-on filter. Reusable filters were popular up to the early 1960s and are still widely used in the racing industry.

In July 2006, the U.S. Department of Energy (DOE) Used Oil Re-refining Study indicated that the United States consumed about 25 percent of the total worldwide demand for lube oils. Congress mandated this inquiry under the Energy Policy Act of 2005, Section 1839. Most European countries are more advanced in reduction, reusing and recycling used oil. For example, Europe has three times more re-refining capacity or the ability of making used oil back into lube oils. The report recommended the following: "It is possible that state would be better served by channeling public education into the expansion of collection centers and financing recycling efforts as opposed to subsidizing space heaters.”

However, current national data is absent regarding what the do-it-yourselfers do with their used oil, filters, antifreeze and other petroleum byproducts (e.g. oil bottles).

DOE estimates 780 million recycled gallons of used oil each year, 83 percent is burned, while 17 percent is re-refined into new lubricating oil. It was found that re-refining used oils saved 8.1 percent of the energy content of the used oil compared to combusting the oil for heating purposes.

Presently, most used oil is burned for fuel in small space heaters, asphalt plants, industrial kilns, boilers and furnaces in America and little is re-refined. Roughly, 110 million gallons of used oil is burned as fuel in 75,000 small, used oil space heaters. Serious environmental and energy questions have been raised by the combustion of used motor oils in space heaters. This report cites that small burners do not provide levels of pollution reduction found in large-scale industrial combustion processes since asphalt/cement plants and steel mills have flue gas treatment technologies. Currently, both Tennessee and Virginia (50 percent tax credit) help pay for these small waste heaters.

The 2006 DOE report was the last federal study to examine used oil. It recommends a national workshop of state used oil management officials to exchange to stimulate active recycling programs to benefit from the experiences of those that have well-established and successful programs. It also encourages those states that have not yet passed used oil legislation to take action. This conference would seek to identify the best practices and guidelines for states to follow including funding mechanisms.

The study also pointed to the need to assist rural and farming communities. Urban areas appear to have more effective recycling programs in place due to closer proximity to recycling centers. DIY consumers in the rural and farming communities offer the highest growth potential for recovering additional volumes of used oils. Thus, increasing the recovery of DIY oil is an important factor in making substantial progress in used oil recycling.

Targeting cost-conscious DIY consumers with effective public awareness and education programs can communicate the benefits of recycling used oils. It’s also important to target non-English oil changers because the needs to communicate in a foreign language are dominant in specific areas.

DOE recommends accelerated tax depreciation allowances to expedite re-refining and to expand re-refined lube base oil production capacity. This incentive is not recommended for combustion end users. Finally, require automobile manufacturers to proactively state in owner manuals that re-refined oils are acceptable as a blending component in motor oils as long as they meet the API certification requirements.

Furthermore, the study encourages that federal agencies make additional volumes of used oils available for sale to be regenerated to re-refined base oil. In addition, the government could explore entering into a potential joint venture operation with private industry to re-refine those oils and produce products that can be supplied back to federal government agencies.

DOE suggests the federal government conducts an extensive study of used oil recycling programs to update what progress has been achieved. Also, support initiatives such as programs for extended drain intervals (i.e. every 5000 miles), enhanced oil filtering systems and other energy conservation and environmental protection.

For 40 years, Rob has worked on water quality improvement programs and resource management issues. He has experience in implementing all types of conservation programs in the Washington, D.C., area and in other parts of the U.S. and abroad. Also, he has provided technology transfer and technical assistance in all aspects of pollution prevention.