DIY: Managing Used Oil and Automotive Byproducts in the U.S. (Part One) 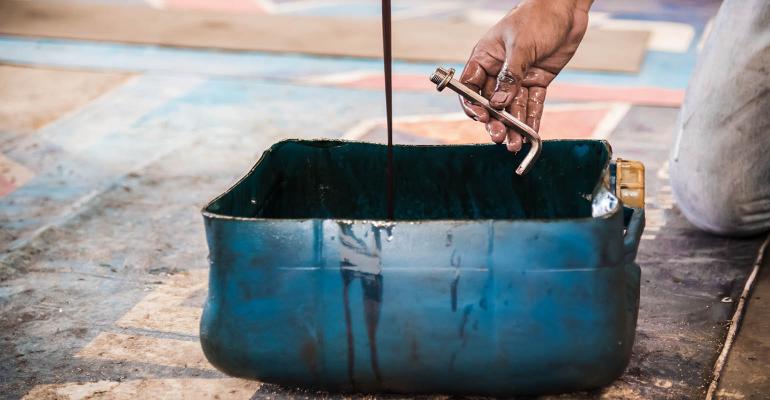 Part one of a three-part series this week takes a look at the current used oil recycling market.

Creating a lifecycle and full cost accounting of oil is beneficial to our future and will help better manage limited resources. And, since our carbon dioxide increased by 2 ppm from last year, transparency is paramount. Once oil is used, it contains various components that may harm our air and water. It also has some bearing on climate change.

Observing non-point sources of pollution such as do-it-yourself (DIY) motorists is one symbol of the challenge to best achieve environmental protection. However, in the last decade, much is unknown regarding this activity nationwide.

The used oil recycling market offers a case study into the complexity of defining and regulating one area of recycling. Before we can understand the secondary oil market represented by recycled oil, we must understand the interrelationship of the primary one.

In 2015, according to the EIA, 300,000 hydraulically fractured wells accounted for 51 percent of U.S. crude production and 67 percent of natural gas production. A 2015 Duke University study showed that 250 billion gallons of water were used to extract oil, producing 210 billion gallons of wastewater. Fracking uses one-half of a barrel of water for each barrel of oil produced, while conventional oil wells produce three barrels of wastewater for every barrel of crude oil produced. The air impacts of oil and gas operations are difficult to estimate.

Twenty years ago, 1 trillion gallons of oilfield wastewater was injected into deep wells on a yearly basis. Americans generate yearly 3 billion tons of oil and gas wastes or more by our oil and gas exploration and production in the U.S. The last report to Congress on this subject was made back in 1986 by the American Petroleum Institute (API). The current sampling method assumed to evaluate the toxicity of oil, Toxicity Characteristic Leaching Procedure (TCLP), was designed to not reveal the hazardous characteristics of oil.

Used oil disposal for the American DIY oil changer can become a serious problem or a valuable resource depending how it’s managed.

Thirty years ago, motorists were largely changing their own motor oil. Today, DIYers can save roughly $20 to $30 instead of going to an auto mechanic if they have all their own tools. This is not counting their time.

“Nearly 40 percent of the pollution in America’s lakes and rivers are due to used motor oil. One state is seeing 114 million gallons of used motor oil created every year, enough to fill 173 Olympic-size swimming pools,” Chris Woodyard wrote five years ago in an article for USA Today.

Knowing how many people drive gives valuable information on used oil generation. In 2009, there were more than 209 million licensed drivers, while in 2014, there were 222 million drivers, according to the U.S. Department of Transportation (DOT). One unknown is the oil change interval, since people may have their oil changed anywhere from 3,000 miles to 10,000 miles.

Patrick Olsen of Consumer Reports finds that oil changes may not be necessary at 3,000 miles but to consult your owner’s manual, which may allow for such changes at twice or more this mileage. Car Talk recommends this change at 5,000 miles since most cars do not need a change at 3,000 miles, contrary to what a mechanic probably recommends.

Thirty-eight years ago, Parade Magazine article, “We Can Stop Wasting our Oil,” brought national attention in promoting DIY recovery. This article cited a 5 percent to 10 percent recycling rate with 85 million Americans DIYers estimated to throwing away 200 million gallons of used oil per year. One gallon of improperly disposed used oil can contaminate one million gallons of fresh water or ruin the water supply for 50 people for a year.

A Fuels and Lubes article stated that in 1995, 65 percent changed their own oil, while in 2007, 30 percent did. However, Thierry Delesalle of Delticom, one Europe’s largest online retailers, indicates there is a growing market of DIYers and that 15 percent to 20 percent of lubricants are sold online. Also, the difficulty in disposing used oil was cited by 17 percent of respondents in a California study of DIYers.

The improper disposal or harmful use of old oil, filters and antifreeze by those who perform their own automobile maintenance is a ubiquitous environmental concern. However, current national data is absent regarding what the do-it-yourselfers do with their used oil, filters, antifreeze and other petroleum byproducts (e.g. oil bottles).

For 40 years, Rob has worked on water quality improvement programs and resource management issues. He has experience in implementing all types of conservation programs in the Washington, D.C., area and in other parts of the U.S. and abroad. Also, he has provided technology transfer and technical assistance in all aspects of pollution prevention.