Behind the Scenes of the Short Film Garbage Man 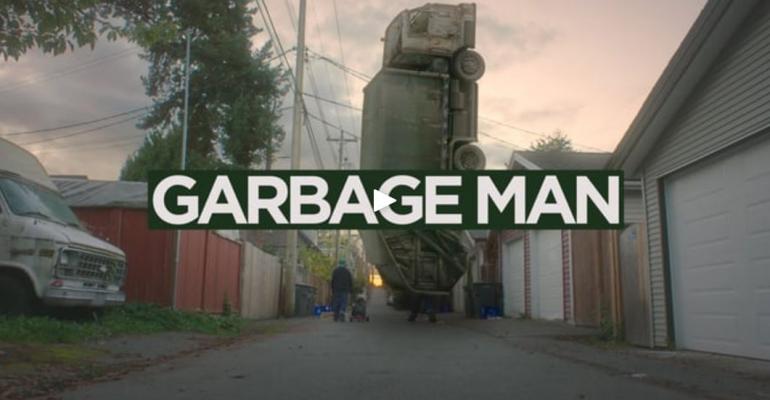 In the 8-minute short film, filmmaker Alan Miller blends his childhood fascination for the waste and recycling industry with a personal period of depression and lighthearted humor.

In the eight-minute short film Garbage Man, filmmaker Alan Miller blends his childhood fascination for the waste and recycling industry with a personal period of depression and lighthearted humor.

As a child, Miller would sit by the window and wait anxiously for the garbage man to arrive at his home in Vancouver, B.C, to give him a friendly wave and hello. He also would tell anyone who would listen that he wanted to be a garbage man. That included his friend’s father who was a little put off when Miller added that he wanted to marry the man's daughter and move to a tiny town to become a garbage man.

While Miller didn’t follow his dream of becoming a garbage man, he did follow his other passion: film making. Growing up, Miller’s family had a small VHS collection so he re-watched the same films over and over again, quickly gaining an interest in movies. And when he was in college, he began taking film classes and the “language of film started speaking to him.”

After college, he began making films, including the recently released Garbage Man that touches on a number of highs and lows in Miller’s life.

“I experienced a bit of a depressed point in my life a while back, and the memories of my interest in the waste and recycling industry started coming back to me,” says Miller. “With those memories, I started to create a story that allowed me to literalize some of the stuff that I was going through and that other people often go through, which is that feeling of being stuck in one place and having all of your own mental baggage accumulating on you and burying you. That idea is how I came up with the metaphor of my old hero, the garbage man, becoming overcome with trash.”

The film was shot in just a couple of days, and the biggest challenge Miller faced was finding a garbage truck for the filming. He reached out to numerous haulers, but a lot of them were too busy running routes to lend a truck for the movie. Eventually, Miller tracked down a film-specific rental truck that had previously been used in an episode of the most recent season of X-Files.

“Before the makers of X-Files got a hold of the truck, I guess it was refurbished and in pristine condition. But once the company rented it out to be used for the show, the crew of X-Files grunged it out and made it look rustic and haunted, which was actually the ideal look that I was going for so it worked out in my favor,” comments Miller.

Miller has made a number of films, music videos and commercials throughout his career, most of which touch on this theme of finding humor in a serious place and finding something serious in a funny place.

“There’s something inherently funny about being covered in trash and terrible smells. People don’t want to think about stuff like that, but sanitation workers are doing an important job every day that often goes unnoticed,” says Miller.  “As I was researching the industry for the film, I learned a lot about the history of sanitation and its connection to city building, health and the development of cities and countries around the globe. It’s all very fascinating, even though it’s a topic that many people avoid.”

Miller is toying with the idea of turning Garbage Man into a larger project and is currently working on a time travel TV concept.