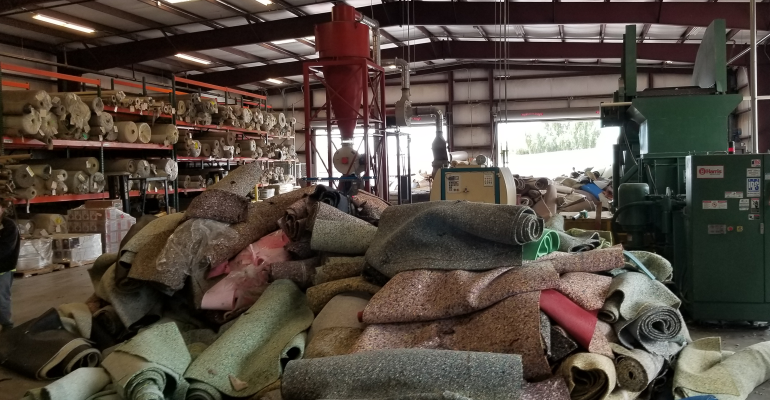 Carpet fiber producer Aquafil has traveled a long and multidirectional journey since its founding in Italy 50 years ago in order to make its own polymer at scale—and to do it sustainably. In building its business model, it’s taken on roles from manufacturer, to recycler, and now has added the role of collector.

It was about a decade ago that Aquafil began creating product from would-be waste, which meant traveling to more territories in search of recycled feedstock. The company has gone as far as the Philippines and Africa and has established headquarters in North American carpet-making hub Atlanta. It’s forged into the West Coast and in December 2020 bought Arizona-based Planet Recycling to get ahold of more scrap in that state as well as in neighboring California.

Through the deal inked with Planet Recycling Aquafil will now add to its assets three collection and sorting facilities: two in Arizona and one in California, boosting its used carpet supply in this region, and as well as augmenting its existing nylon 6 feedstock stream for its plant in Slovenia where it goes into Aquafil’s brand, ECONYL, made from nylon, textile scraps, industrial plastic, fishing nets and old carpets.

“We do not buy polymer from third parties, but make our own fiber,” says Franco Rossi, president of Aquafil USA.  Being able to continually feed his industrial process has meant gaining control of the whole value chain, rather than limiting himself to one step along the way to creating finished product.

One journey milestone happened in 2010—the year the company began using nylon 6 waste to make carpet fibers.  It’s done through depolymerization, involving breaking down nylon’s long polymer chain to eliminate additives, pigments, and other contaminants. This process ultimately enables Aquafil to create new polymer of a different color, and without depending on virgin materials.

“Now that we were making regenerated nylon out of wasted nylon, we needed to source more waste, and that’s the next important step,” Rossi explains.

Then the question was, where else could the manufacturer, now a recycler too, find more raw material, and its path branched out further. Aquafil started sourcing used carpet, and set up two West Coast carpet recycling facilities to process it; one in Phoenix, Ariz. and one near Sacramento, Calif. Here they shred old carpet into smaller pieces; then separate the nylon, filler, and polypropylene (PP). The nylon is shipped to the Slovenia plant to make ECONYL. For every 10,000 tons of raw material, Aquafil saves 70,000 barrels of crude oil and 65,100 tons of CO2, according to Rossi.

And the company at least makes a dent in curbing the roughly 4 million-plus pounds of carpet that the U.S. Environmental Protection Agency estimates is landfilled every year.

The separated PP and filler are sold locally and go into other products, such as garden chairs and concrete.

“We have invested a lot to be able to recycle carpet. Processing centers are expensive, but we found ourselves in trouble in that it was difficult to find enough feedstock,” Rossi says.

Aquafil has been working for five years with Planet Recycling, who diverts 10,000 tons of carpet and carpet pad from Phoenix Valley and San Diego County’s landfills a year. It’s mostly polyethylene terephthalate and nylon, and some PP and wool. The operation organizes collections and separates material into different streams.

Rossi says this relationship is how his company was able to set up its first recycling plant in Arizona.

“We have bought from Planet Recycling for years because they are based in Phoenix and California where we have recycling operations, and it would be expensive to move carpet across states. We intend to expand in California because it’s the only state in the country with legislation to support subsidized carpet recycling. Without subsidies, nobody will recycle carpets in North America,” Rossi says, adding that the subsidy covers at least one-third of his processing costs.

The move to buy out its long-time partner made sense to him.

“The underlying strategy is we are getting into carpet collection, which we have never done before. It’s an additional piece of integration in our supply chain where we are getting closer to the source to increase availability.”

Meanwhile, only about 25% of discarded carpet is actually collected in California, he says commenting that’s not good enough.

“We need a different collection system, and we need deals with waste management companies and materials recovery facilities. Independent collectors will not do this on their own, and we felt it was necessary to introduce new energy and new initiatives in carpet collections,” Rossi says. He estimates that Aquafil will see a 50% increase in feedstock in the first year since acquiring Planet Recycling.

He’s found the right business to integrate into his company, he believes, explaining it’s about reputation.

“Waste management, particularly with end-of-life carpets, has had scandals when companies pretend to recycle carpet but in reality it’s landfilled. We have known the Planet Recycling family for years and have seen how they run their business. There is nothing hidden.”

Aquafil anticipates no major changes in Planet Recycling’s staffing or operations. What will change is the company will expand collections in California to the Bay area and further expand in Sacramento.

Rachel Palopoli, co-owner of Planet Recycling says the business agreement makes “absolute sense, and the reason is we are an established collector and sorter in business for over 20 years.”

“We have been doing business together for a long time, and we understand how to do it … it’s a great marriage. They pride themselves on being family run, as we do. For us, coming together, and going from a small to a large family operation culturally fits. We are super excited to see what great things we can do together.”