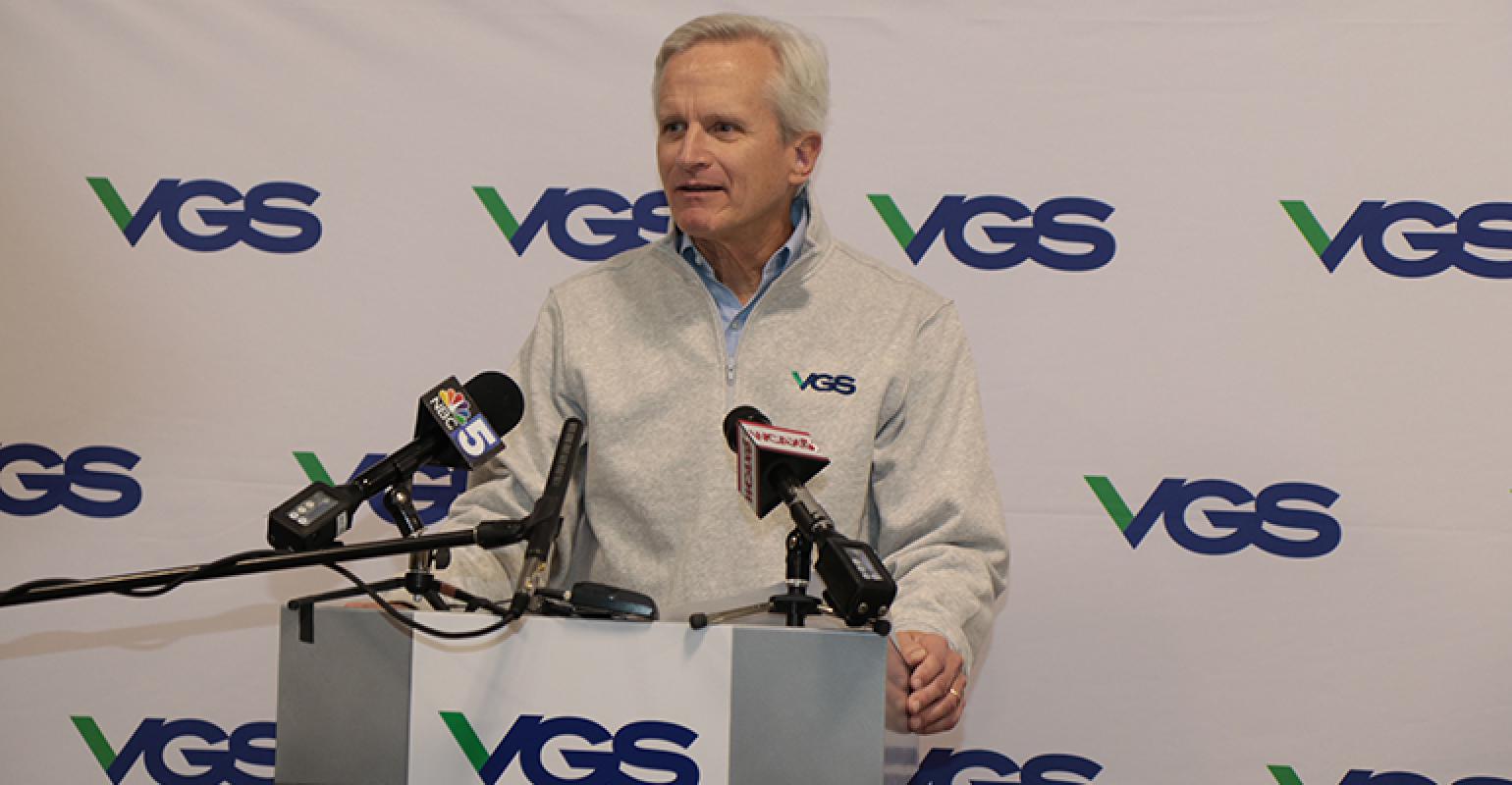 The company unveiled its immediate plans to double energy efficiency savings and dramatically increase renewable natural gas for all customers.

“Today we put a stake in the ground: VGS stands with our customers and partners in the fight against global climate change,” said Don Rendall, president and CEO of VGS, in a statement. “For more than 50 years, VGS has proudly served Franklin, Chittenden and Addison counties with safe, reliable and affordable natural gas. We’ve held energy bills low, helped support a robust local economy, switched customers to a cleaner fuel source and kept customers safe and warm in their homes. That won’t change.”

“But how we do it will,” added Rendall. “We propose to double energy efficiency savings and ramp up the role of renewable natural gas. We will help our customers make significant, measurable reductions in greenhouse gas emissions—30 percent in the next 10 years—and put them and this company on course for zero greenhouse gas emissions by 2050.”

“The time to act is now,” he said. “VGS will take steps today to transform from a traditional gas utility to a climate-forward energy company, reducing greenhouse gas emissions to zero while strengthening our commitment to safe, reliable and affordable service for our customers.”

The cornerstone strategy of the VGS vision is to double efficiency savings by 2025 with a $20 million upfront investment in its energy efficiency program. VGS will propose to triple home weatherizations—3,350 homes weatherized by 2025—focusing on low-to-middle income customers, as well as boost energy improvements for commercial and industrial customers.

As part of the efficiency expansion, VGS will help customers find the right low-cost, low-carbon solution for their energy needs, including non-gas alternatives such as electric cold climate heat pumps, advanced wood heat systems and other options in support of the state’s 90 percent renewable by 2050 plan.

“VGS has been a strong partner in supporting Vermonters with low and fixed incomes, and we know they’ll continue to be,” said Jan Demers, executive director of the Champlain Valley Office of Economic Opportunity, a local nonprofit committed to addressing fundamental issues of economic, social and racial justice and working to help those in the community achieve economic independence. “Weatherization is an important way to reduce costs for Vermonters. We appreciate this balanced approach to make steady environmental progress while pledging ongoing support for those who need it most.”

The average residential customer who participates in VGS’ energy efficiency program saves about $200 per year—between 15 to 20 percent—on their energy bills.

“VGS has been an excellent partner as we’ve worked together to help homes and businesses tighten up their air sealing and improve insulation, reducing heating bills and carbon emissions,” said Rebecca Foster, director of Efficiency Vermont, in a statement. “We’re excited to hear VGS announce its bold goal to eliminate greenhouse gas emissions by 2050 and the key role energy efficiency will play in achieving this goal. These steps will accelerate the state’s progress toward reducing carbon emissions while continuing to help Vermonters keep their buildings comfortable and affordable.”

VGS plans to increase its levels of renewable natural gas so that 20 percent of its supply mix for retail customers will come from RNG by 2030. RNG is produced by capturing naturally occurring methane emitted from decomposing waste materials at places like farms, landfills and wastewater treatment plants. VGS plans a steady increase in RNG in the coming years. The company will propose to add approximately 2 percent of RNG per year into its portfolio, which will allow VGS to build out its RNG supply chain and help keep rates affordable.

Last year, VGS said it became the first utility in the nation to offer customers a retail RNG option. VGS built the program from the bottom up, including the accounting, supply management, verifications and gas quality procedures to introduce this product to the marketplace.

VGS is partnering to develop a district energy system (DES) in Middlebury, Vt., and is also partnering with Burlington Electric Department (BED) and other stakeholders to develop a system in Burlington. A DES is a network of underground pipes used to provide thermal/heat energy to buildings more efficiently than individual systems. These DES projects use renewable energy as their source.

“Today’s announcement is exciting and welcome news for BED because VGS’ commitment to decarbonize complements the city of Burlington’s move to net zero energy,” said Darren Springer, general manager at Burlington Electric Department, in a statement. “VGS has been an important and valued partner to BED through our joint work on weatherization and energy efficiency for our customers, the energyChamp Challenge and efforts to move forward with district energy. Today’s announcement should be a call to action for all energy companies to consider how to adapt their business models to address the urgent climate challenge we face.”

In partnership with Burlington Electric, VGS will launch a net zero home pilot that will assist residents in achieving their greenhouse gas reduction goals. The pilot is intended to help residents make their entire home energy footprint net zero—meaning all of their electric, thermal and transportation energy is from renewable sources.

Last month, VGS partnered with NG Advantage (NGA) to announce a plan to offer renewable natural gas to industrial users and hospitals across the Northeast through VGS’ pipeline and NGA’s virtual pipeline infrastructure. This partnership allows NGA’s customers across the Northeast to significantly reduce their carbon footprint with RNG, a benefit that until now has only been available to pipeline-connected users.

Taken together, the environmental benefit of these proposals is a 30 percent greenhouse gas reduction in customers’ homes and businesses by 2030 as compared to 2019. In 2030, that’s an annual reduction of more than 187,000 metric tonnes of CO2 equivalents. In everyday terms, that is equivalent to about 40,000 passenger cars, more than 15 percent of cars registered in Vermont.

Further, with a focus on weatherization for low-to-moderate and fixed-income customers, VGS noted that “it is determined to help those least able to make ends meet contribute to a clean energy economy.”