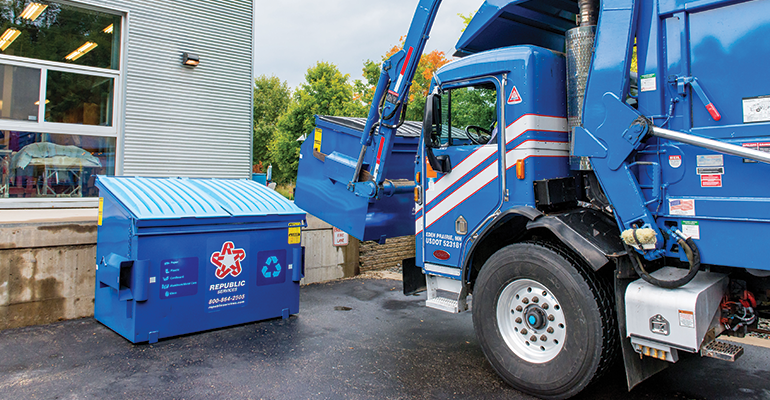 After more than a decade of leading Republic Services, CEO Donald W. Slager has announced his intent to retire.

His storied tenure in solid waste began four decades ago as a truck washer during his teenage years. Slager quickly transitioned from the maintenance shop to driver and then to a supervisory position at 24 years old.

"He started on the back of a truck and to this day, I bet he could actually go and change the bearings on a on a garbage truck and could drive the route almost as good as any of the drivers today," says Michael E. Hoffman, managing director, Stifel, who has known Slager for most of his career. "Most important, he's left his company and his community better than he found it."

Slager rose throughout various leadership positions at National Waste Services, which Allied Waste Industries acquired in 1992.  Republic Services purchased Allied Waste in 2008 in a $6.1 billion deal, a merger in which Slager played an integral role. He quickly succeeded to become the company's CEO in 2011, where he "left an indelible mark by delivering sustainable shareholder value and transforming Republic while creating a highly ethical, inclusive, and engaged culture, a recognized company brand, and a clear identity for Republic's people," says Manny Kadre, Republic's Chairman of the Board.

"If you look at it from a stock market standpoint and business fundamentals standpoint, it's been a phenomenal decade," Hoffman says. "This company is so much stronger a business with much better fundamentals over the last decade that Don's been CEO."

Hoffman touches on how Slager's "methodical" nature led to the company's success.

"He sought out people, saw in them potential and then challenged them to exceed that potential by putting them in positions of comfort and discomfort and not in a negative way," he says. "He asked them to reach out of their comfort zone and challenge themselves. And that's who the senior leadership team is today."

Now, Slager leaves the keys to Republic President Jon Vander Ark, who joined the team in 2013 as the company's executive vice president and chief operating officer. Vander Ark will retain the title of president and also join the Board of Directors. The transition will take place on June 25, 2021.  Slager will serve in a consulting capacity for the remainder of 2021 to complete the transition, according to the company.

"We've built a durable foundation from which the company can continue to prosper," Slager says. "Jon has contributed considerably since joining the team and has been instrumental in launching and integrating several key programs including Capture, Priority Based Selling, and Digital Operations. His innovative spirit and passion for sustainability are great attributes. I have every confidence Jon will continue to position Republic as an industry leader throughout the company's next chapter."

Vander Ark says it is an "honor" and "humbling" to lead in Slager's footsteps.

"I look forward to building on the great work that has already been done," he says. "I am energized for the opportunity to lead this strong Republic team and for what we expect to accomplish on the road ahead. We are off to a strong start to the year which is supported by the positive momentum in the business and macro factors that have been better than anticipated.  It is an exciting time to be at this company."

Hoffman says Vander Ark's quick succession throughout various operating roles is a glance into the progress Republic could make under Vander Ark's leadership.

"You've seen [Vander Ark's] hand," he says. "You've seen it through the improvement in the safety record - this is not taking anything away from Don. Don put these people in these positions to be able to accomplish this."

Vander Ark's record is only an indication of how Republic is moving directionally, Hoffman says. He already has left a "whole series of breadcrumbs" from improvements in employee retention, customer retention, profitability improvement, a transition from a commodity-based model into a processing model, the introduction of technology into recycling and the embracing of electric vehicles.

"This team is that cohesive that there will be another 10-year run of really great fundamentals, margin improvement, organic growth, acquisition and validation, cash conversion and expansion of the business model," Hoffman says.

Of Vander Ark's appointment, Kadre comments that "this announcement follows a robust, multi-year CEO succession planning process developed and executed by Don and the Board of Directors, culminating in this unanimous appointment. Don has groomed an outstanding successor who will continue to serve our customers, our people, and our shareholders well. Jon is a proven leader who is poised to build off our strong foundation, leverage our leading market position, and capitalize on our momentum."