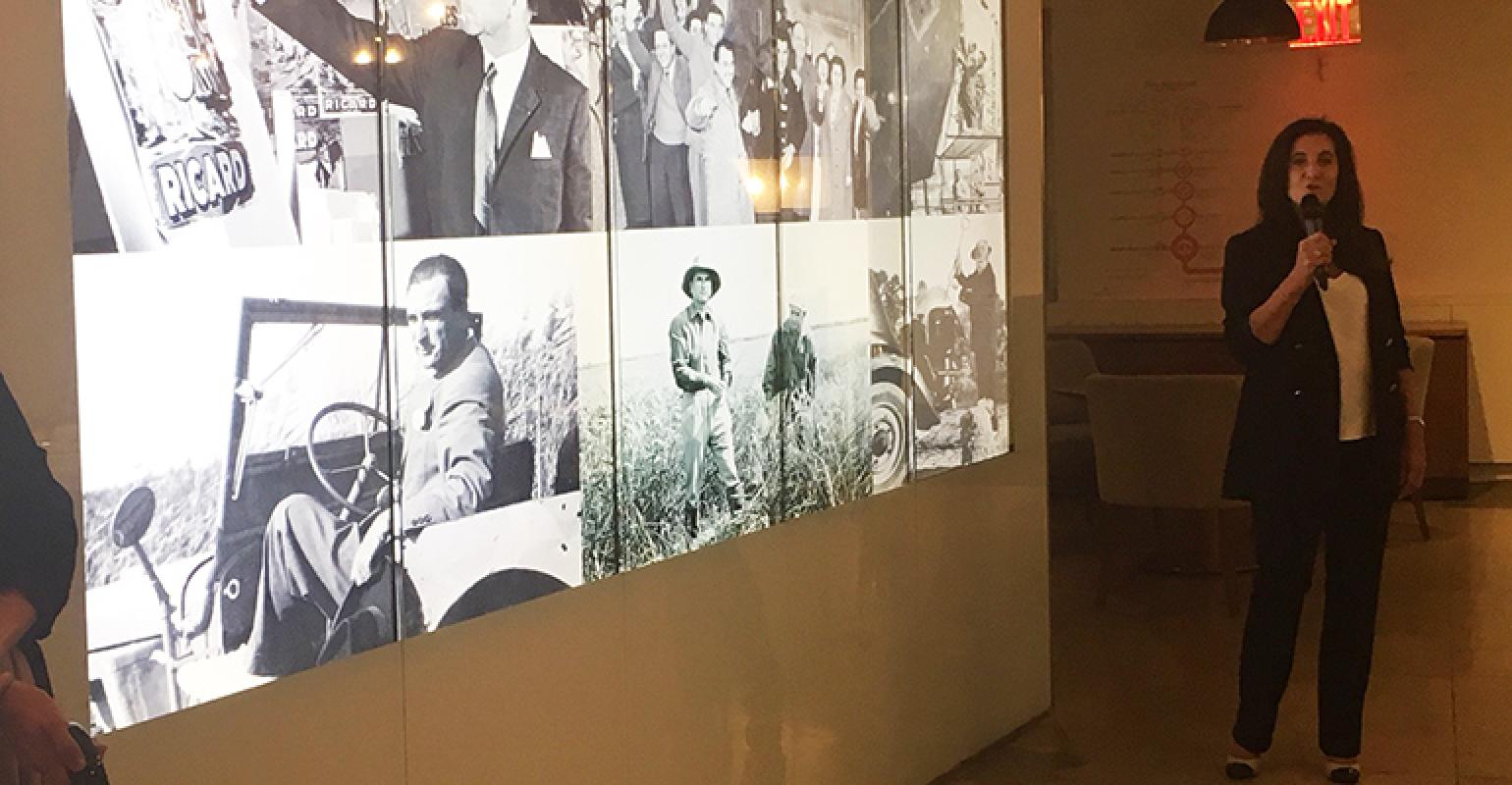 Pernod Ricard, a global wine and spirits company that produces well-known products like Absolut Vodka, Jameson, Martell and Kahlua, among others, unveiled its sustainability roadmap for 2030 at New York City-based Pernod Ricard USA in conjunction with the 2019 United Nations (U.N.) General Assembly.

During a happy hour for some U.N. delegates on September 25, Vanessa Wright, Pernod Ricard’s vice president of global sustainability, and Noémie Bauer, global sustainability and responsibility manager, outlined the company’s sustainable development progress and highlighted actions toward its 2030 goals.

As an added bonus, Trash Tiki, an anti-waste punk popup, which is the brainchild of bartenders Kelsey Ramage and Iain Griffiths, mixed anti-waste craft cocktails for the evening. Griffiths, who bartended the event, said Trash Tiki regularly partners with Pernod Ricard for various projects. 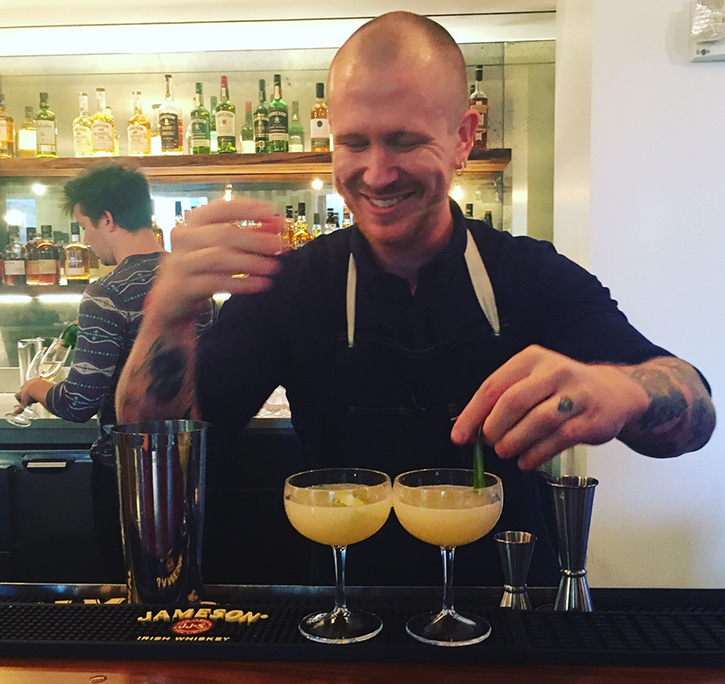 Pernod Ricard’s long-term sustainability strategy aims to ban single-use plastic, commit to 100 percent recyclable or compostable packaging, slash its carbon footprint and implement gender balance in its top management teams by 2030. It also plans to ban all promotional items made from single-use plastic and ensure that 100 percent of its packaging is recyclable, compostable, reusable or bio-based by 2025.

The strategy lays out eight targets in four key areas—nurturing its terroir (meaning earth or soil in French) and boosting biodiversity, valuing people through increasing diversity and training, minimizing waste and creating a circular economy and fighting alcohol misuse though responsible hosting.

“This isn’t a new thing for us,” explained Wright during the September 25 happy hour. “We have had very strong plans around sustainable consumption in our markets around the world. But we also have a 2020 environmental roadmap. We’ve got some way to go on energy use and waste, but we’ve reduced water by 20 percent and carbon by 30 percent.”

“We know the environment is changing very quickly,” she added. “And this is hugely important, especially around the consumer. We really believe that all of our brands need to have a social and environmental purpose as well as the corporate purpose that we have.” 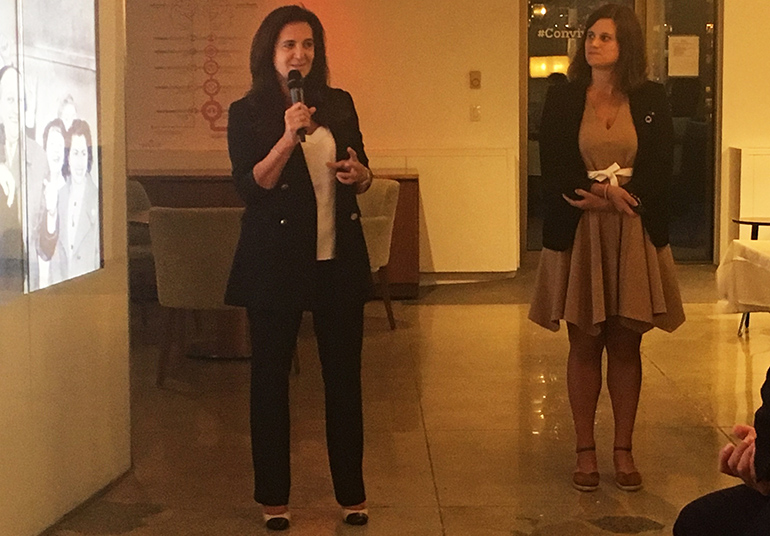 1. Nurturing Terroir: By 2030, 100 percent of the company’s global affiliates will have a strategic biodiversity project addressing their most pressing issues and responding to the challenges of climate change. In addition, by 2025, the company will develop regenerative agriculture pilot schemes within its owned vineyards in eight wine regions—Argentina, California, Cognac, Champagne, Spain, Australia, New Zealand and China—to mimic natural processes to improve the quality of top soil, watersheds and ecosystems. Wright explained the company is also addressing climate change from agricultural production using science-based targets.

2. Valuing People: By 2022, the company said it will ensure equal pay across the business, and by 2030, the top management team will be gender balanced. In addition, by 2030, 100 percent of employees will have received training at least every three years to develop new skills. By 2030, the company will train 10,000 bartenders on the bar world of tomorrow to host consumers in a more sustainable way including being anti-waste and plastic free. The pillar also sets out to embed a United Nations human rights approach, using the U.N. Guiding Principles on Human Rights, added Bauer.

3. Circular Making: By 2025, Pernod Ricard will ban all promotional items made from single-use plastic and 100 percent of packaging will be recyclable, compostable, reusable or bio-based. In addition, by 2030, the company will pilot five new circular ways of distributing wine and spirits and help increase recycling rates in the top 10 largest markets with low recycling rates. The company is also a signatory of the Ellen MacArthur Foundation’s New Plastics Economy.

By 2030, the company also vows to be water balanced in all high-risk watersheds, replenishing 100 percent of water consumption from production sites. In relation to carbon emissions, Pernod Ricard explained it is committed to reducing the overall intensity of its carbon footprint by 50 percent by 2030 in line with the science-based targets initiative. The company also plans to move toward 100 percent renewable electricity by 2025, incorporating sustainable design of products throughout the business, certification, recycled content and finding new ways to reuse wastewater.

Wright noted that Absolut vodka is a leading example of the company’s circularity efforts. She touted Absolut as a carbon-neutral distillery in which 99 percent of organic byproducts are recycled to create products such as animal feed and biogas. This stillage is used to feed 250,000 pigs and 40,000 cows every day, she added.

4. Responsible Hosting: By 2030, every affiliate of Pernod Ricard across the world will have at least one program in partnership, at scale and evaluated, to fight alcohol misuse. And during the same timeframe, Pernod Ricard will expand its Responsible Party program globally to reach at least one million young adults.

“By 2030, we want to source all of our key agriculture use to be LEED [Leadership in Energy and Environmental Design] certified,” explained Bauer. “We will continue partnering with organizations like Trash Tiki who make all their cocktails anti-waste and make sure that we leave a lesser footprint as possible. This is one of our best partnerships.” 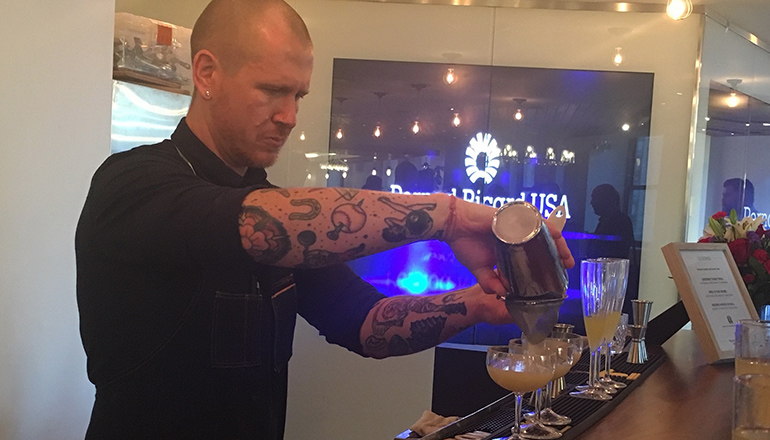 During the event, one of Griffiths’ signature drinks for the night was a homemade green apple champagne chartreuse cocktail made from three types of apples that otherwise would have gone to waste. Trash Tiki’s overall goal is to make cocktails that don’t destroy the planet and to train bartenders on sustainable practices.

“It’s about getting bartenders to have more respect for the produce they use and to get more than one use out of it,” says Griffiths.

Moving forward, Wright explained the company still has a long way to go.

“It’s been a long and sometimes quite hard journey, but we’ve really engaged the business and have gotten top-level support,” she said. “All of our affiliates will give us their plan to match these pillars by mid-October. So, we’re starting, but we know we’ve got a lot to learn.”