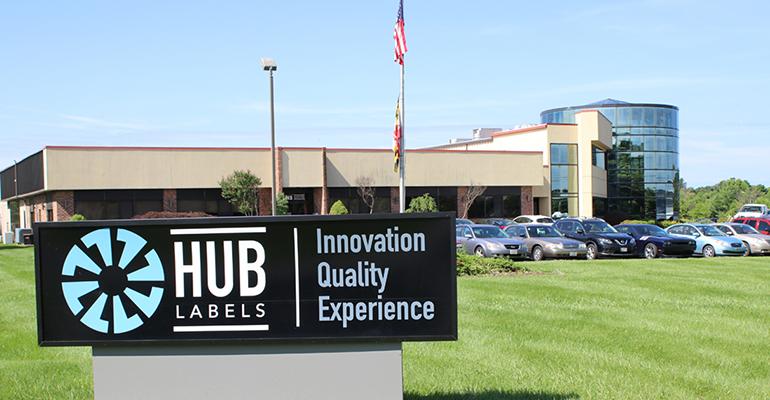 Hub has met its 100 percent landfill diversion goal via a partnership with Entsorga West Virginia that converts Hub’s waste to solid recovered fuel.

Hub Labels has finally met a monumental goal it has been working toward for slightly more than a decade. The Hagerstown, Md.-based label manufacturer has become landfill free, despite its place in an industry notorious for generating high volumes of hard-to-recycle and impossible-to-recycle materials.

The latest of its several green strategies, which has bumped it up to its 100 percent diversion target, is a partnership with Entsorga West Virginia, which is in Martinsburg. Entsorga is converting Hub’s waste to a clean-burning solid recovered fuel (SRF) for a cement kiln.

“In 2018, we had 700 tons of material going to one of three facilities—either the landfill or one of two recycling facilities. By the end of [2019], we think all 700 tons we generate will go to Entsorga,” says Nink Myers, Hub Labels purchasing manager.

After label converters like Hub print and dye cut, they are left with multilayered material with substrate, adhesives and other components. These waste materials are either rerolled for disposal or an air conveyor system is leveraged to chop and convey them to a container. Recycling these materials would first require breaking them down into separate streams, which is virtually impossible, according to Rosalyn Bandy, vice president of sustainability for TLMI, a trade association for label suppliers and converters.

So, options are to landfill, incinerate or to do as Hub has elected and send leftovers from the production process for energy recovery.

Jesse Hood, Hub's quality and continuous improvement manager, notes two specific solutions to production-related problems that have come from the arrangement with Entsorga. One is a new home for the thick corrugated cores that labels come on. Traditionally, the company’s customers had to figure out how to deal with these hard-to-grind, bulky materials, but now they go into the mix to make a clean fuel to replace coal.

The second solution is a streamlined disposal process. Before, Hub had three dumpsters for multiple streams; now it has one dumpster that its longtime hauler, Republic Services, picks up and ships to Entsorga. Each haul is 8.5 to 10 tons of waste. 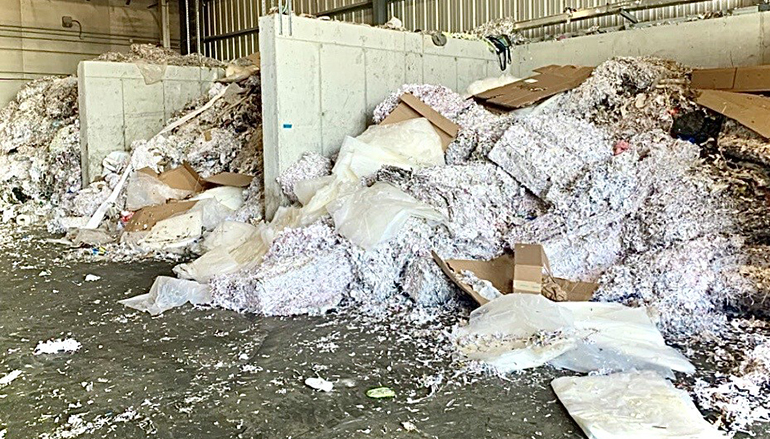 “We believe shipping it all to Entsorga will probably save us money because we are not absorbing transportation costs to take tractor-trailer loads to Pennsylvania a couple of times a month as we had been. And very important to us is we are reducing emissions,” say Myers, adding the disposal cost is comparable to landfilling.

Material comes into Entsorga as commercial and industrial waste as opposed to municipal solid waste, so it can be made directly into fuel versus placing it in the bio-oxidation hall (similar to composting) since it doesn’t contain organics. This accelerates the fuel-manufacturing process.

“We blend it with other commercial and industrial waste and municipal solid waste, which helps us increase BTU [British thermal unit] value and ultimately extract a lot of energy,” says Emily Dyson, director of science research and development for BioHiTech Global, the majority owner of Entsorga West Virginia.

Entsorga gets feedstock from several commercial and industrial generators and takes in materials recovery facilities’ residuals, including high-fiber items like paper and carpet scraps as well as plastics Nos. 4 to 7.

These are materials the recycling market often no longer accepts as it [unlike SRF manufacturers] has no market for them, says Dyson.

Republic, which previously hauled Hub’s waste to Washington County Landfill, collaborated with Entsorga and Hub by offering test loads to ensure the new process would work.

“We were excited to partner with Hub Labels to meet their sustainability goals to become landfill free. It’s very advantageous that Entsorga is in our service area, as we are able to utilize their facility. This will enable us to expand these great options to many of our customers,” says Tonya Dick, territory executive for Republic Services’ Western Maryland Business Unit.

Currently, not many label companies are sending materials for energy conversion because of the obstacles they face, according to Bandy.

“You have to separate out matrix waste and store it until you have enough to send to a facility. Many [manufacturers] don’t have extra space to store or an extra bay to park an empty trailer. They may not have staff to separate the materials or a facility to take the material to within a reasonable distance to make it cost effective,” she says.

But sustainability, landfill avoidance and recycling are becoming increasingly important to brands.

“Companies that have overcome these obstacles and found a way to do what Hub is doing are finding it’s helping them win business. And they take pride in that they are recycling and getting non-recyclable materials out of landfill,” says Bandy.