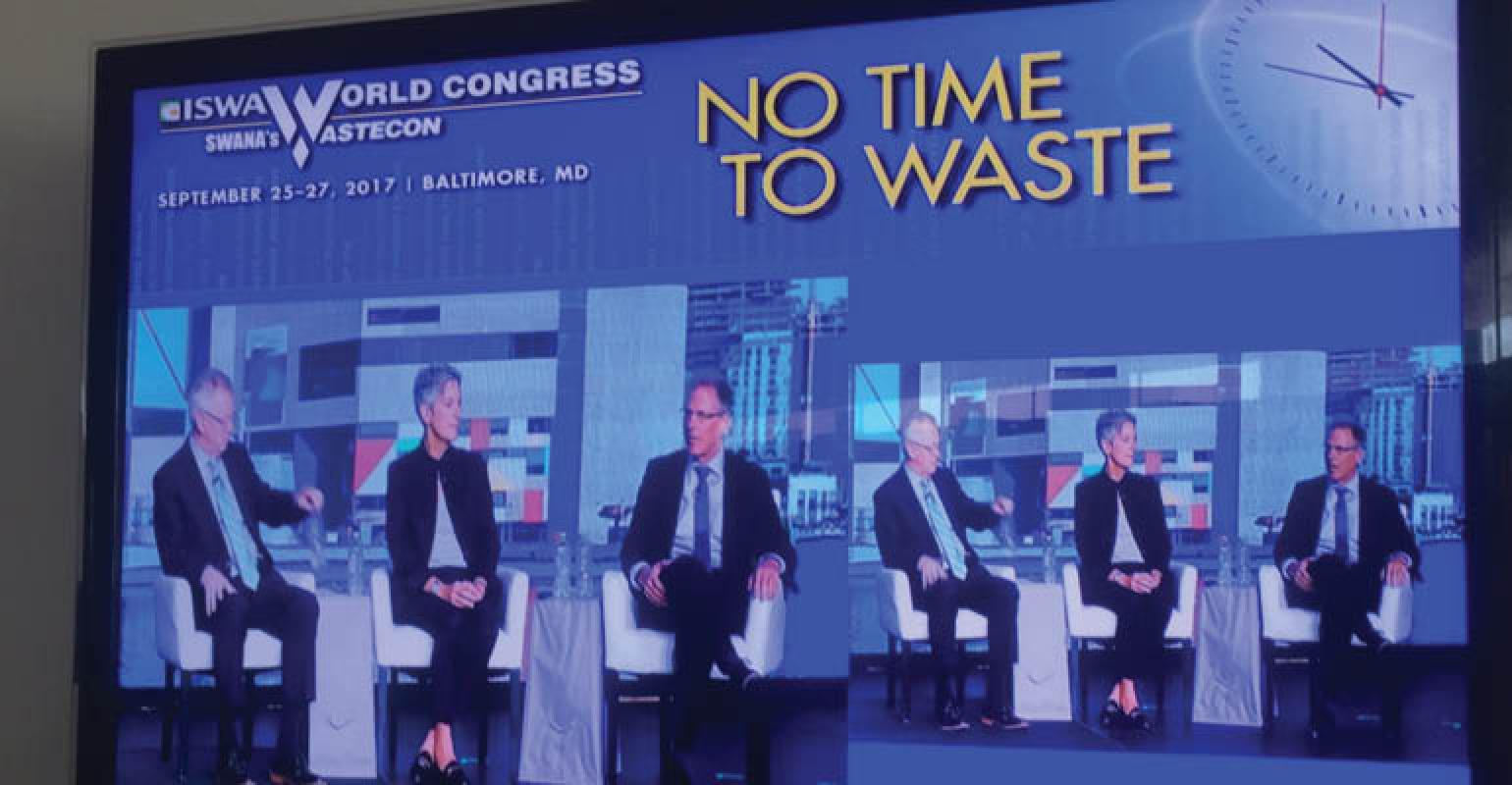 In this month’s edition of Business Insights, we present highlights from a number of the events we were able to attend.

The International Solid Waste Association (ISWA) and the Solid Waste Association of North America (SWANA) combined forces last week in Baltimore and jointly hosted the three-day ISWA World Congress/WASTECON 2017 conference. The event attracted more than 2,400 participants for a variety of keynote sessions, educational presentations, networking opportunities and facility tours. In this month’s edition of Business Insights, we present highlights from a number of the events we were able to attend.

One of the early keynote sessions featured CEOs from Waste Management (WM), Covanta (CVA), China Everbright International and Estre Ambiental, a Brazilian firm. WM’s Jim Fish noted that the thrust of the proposed scrap ban was to reduce contamination in recycled material imports, and he highlighted the necessity of improving bale quality. Several speakers at the conference also noted that Chinese government delays in granting import licenses were creating additional uncertainty and a backup of recyclables, which has caused a sharp reduction in pricing this past month for mixed paper, which was expected, but also for old corrugated cardboard (OCC), which was not. China Everbright’s CEO detailed waste management statistics, which offered additional insight on other likely drivers of the proposed ban. He noted that 57 percent of China’s waste is landfilled and 40 percent is handled by waste-to-energy (WTE) plants. Only 2 to 3 percent is officially recycled. In a subsequent keynote session, another Chinese executive noted that the underlying recycling rate may be closer to 30 percent, as scavengers generally remove much of the paper and metals before they reach final disposal. Both Chinese speakers emphasized the importance of building WTE capacity first, in order to keep up with the generation of waste, which is growing much faster than in the U.S. But both speakers also noted that China intends to turn to, and emphasize, more focus on sustainability and higher recycling goals, implicitly signaling a national desire to build China’s domestic recycling markets and rely less on imports. This may be a circumstance where the government’s aims and mills’ feedstock needs are at odds, given the higher quality of U.S. OCC in particular, and there are scattered reports of Chinese mills buying virgin pulp for feedstock in the wake of both the pending import ban and the dearth of new import licenses granted or renewed.

Brazilian Company to Become Listed on the Nasdaq Stock Market

The Brazilian company featured in the CEO keynote session, Estre Ambiental, has also been in the news lately, as it is in a definitive agreement to combine with a special purpose acquisition company (SPAC), Boulevard, which is backed by Avenue Capital Group. According to its announced plan, Estre Ambiental will be traded on the Nasdaq exchange pursuant to the transaction. Two well-known U.S. solid waste executives, Richard Burke of Advanced Disposal (ADSW) and Bob Boucher of Wheelabrator Technologies, have agreed to be on the board. It was noted in the CEO keynote session that although Brazil has comparable environmental regulations to the U.S. on the books, only roughly half of the population has legal service, offering potential upside. The market size is roughly one-third of the U.S., or 80 million tons per year of mixed solid waste.

Smart technologies were heavily featured in two keynote sessions as well as in numerous educational presentations. The emphasis was generally on innovations in the front-end collection operations—GPS tracking, on-board computers, container sensors and predictive fleet maintenance. Although in the pilot stage, robotics were of great interest for municipal recycling facilities (MRFs). Surprisingly, autonomous vehicles, or driverless trucks, were not viewed as near-term industry disruptors, despite an industry-wide shortage of drivers. Also, landfill replacements, at least in the U.S., remain on the (seemingly distant) horizon. WM CEO Fish noted that WM had invested nearly one-half a billion dollars in alternative technologies but had yet to find something economic and scalable, particularly as he put the all-in cost of landfill, on average nationwide, at $20-$22 per ton. It’s just tough to compete with that.

In the keynote session “Smart Cities: The Data Driven Evolution of Waste Management”, the speakers took a slightly different tack. Marianne Blanc, key accounts director at Suez North America, discussed why Suez had invested in Rubicon Global, emphasizing Suez’s belief that the world was moving away from landfill usage, and control of both the client and the waste flow was becoming more important than asset ownership, which she believed was going to cause a transformation in the solid waste market. In that regard, she emphasized Rubicon’s emphasis on digitalization and diversion, which she thought could be leveraged on both the operations and client sides. Nate Morris, CEO of Rubicon, saw the Suez investment as a validation of their strategy, though he was far less combative with regard to the other industry players than in prior presentations, noting the need to maintain relationships within the industry and playing down the “Uber of Trash” characterization. Instead, he emphasized Rubicon’s work with cities, first in using technology to aid in more cost effective and efficient trash collection, but ultimately changing the garbage truck into “the eyes and ears of the city”, or a rolling data center that can monitor such various things as recycling participation, potholes, vacancies and graffiti. Rubicon currently has pilot programs in three cities—Atlanta, Columbus, Ga., and Santa Fe, N.M.

Kathryn Garcia, commissioner of the Department of Sanitation in New York City (NYC), noted that the proposed transition to franchises for the commercial sector would be very measured and deliberate in order to do it right. She emphasized that a major goal was to decrease the truck traffic and improve the environmental benefits. She pushed back on the assumption that it would cost more—noting that oftentimes small businesses pay relatively more than large businesses and that the cost of franchising varies widely across the country by service offering. A draft plan is expected in 2018. She also reported that NYC’s curbside organics program was expected to reach 3.3 million people by the end of October. Both she and Jim McKay, general manager of Solid Waste Management Services in the City of Toronto, talked about the difficulty of organics recovery in high-rise apartment buildings, with McKay calling it one of the city's bigger challenges and Garcia stating it is down on NYC's list of priorities given the enforcement hurdles. McKay also noted that the city is looking at the diversion metric (tons either recycled or diverted from landfill), as it is rapidly becoming a more dated metric given the lightweighting of the waste stream.

The Garbage Industry is Still a Pretty Good Place to Be

As Michael Hoffman, managing director at Stifel, noted in the “Drivers of Opportunity in Solid Waste” session, the solid waste industry is still a pretty good place to be despite near-term hurdles of hurricane-related expenses and the Chinese import licensing delays, which are impacting recycled paper prices. With housing still expected to be on an upward trajectory (and eventually possibly turbocharged in hurricane-affected areas), he noted that the management teams in the industry consistently put the waste cycle in “the middle innings”.