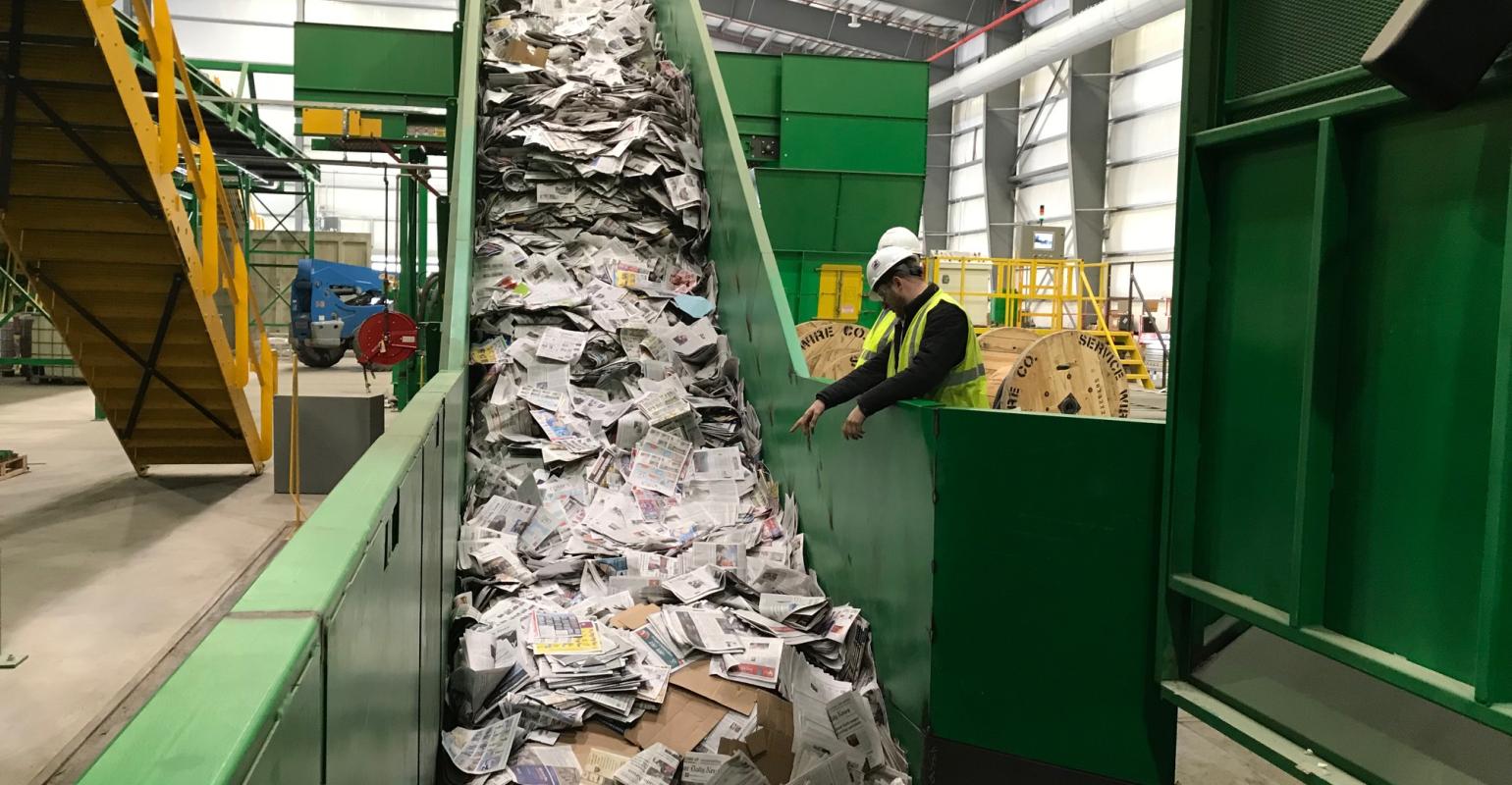 The April launch will include the “dry end,” which is a materials recovery facility that sorts and processes cardboard, No. 1 and 2 plastics and metals.

The “wet end” is scheduled to start in May. It includes a pulper that breaks down food waste; contaminants and recyclables are pulled out, then the organic fraction is converted to biogas via an onsite anaerobic digester.

Once all moving parts are going and the plant is up to speed, it will sort, recycle, process and refine up to 180,000 tons of municipal solid waste (MSW) a year, which will come from 115 towns and cities represented by the Municipal Review Committee (MRC).

Operations were initially expected to start in April 2018. Fiberight CEO Craig Stuart-Paul told Waste360 the delay was due to a nearby waste-to-energy plant appealing the company’s permit, which cost 236 days.

Representatives from MRC said there were other snags, citing communication problems that had to be resolved. For instance, there was unclarity around some materials that would or would not be accepted. Meanwhile, there have been technical details to finetune and coordinate to launch the front end, plan for launch of the backend systems and ensure that both ends run together smoothly once the entire plant is operational. 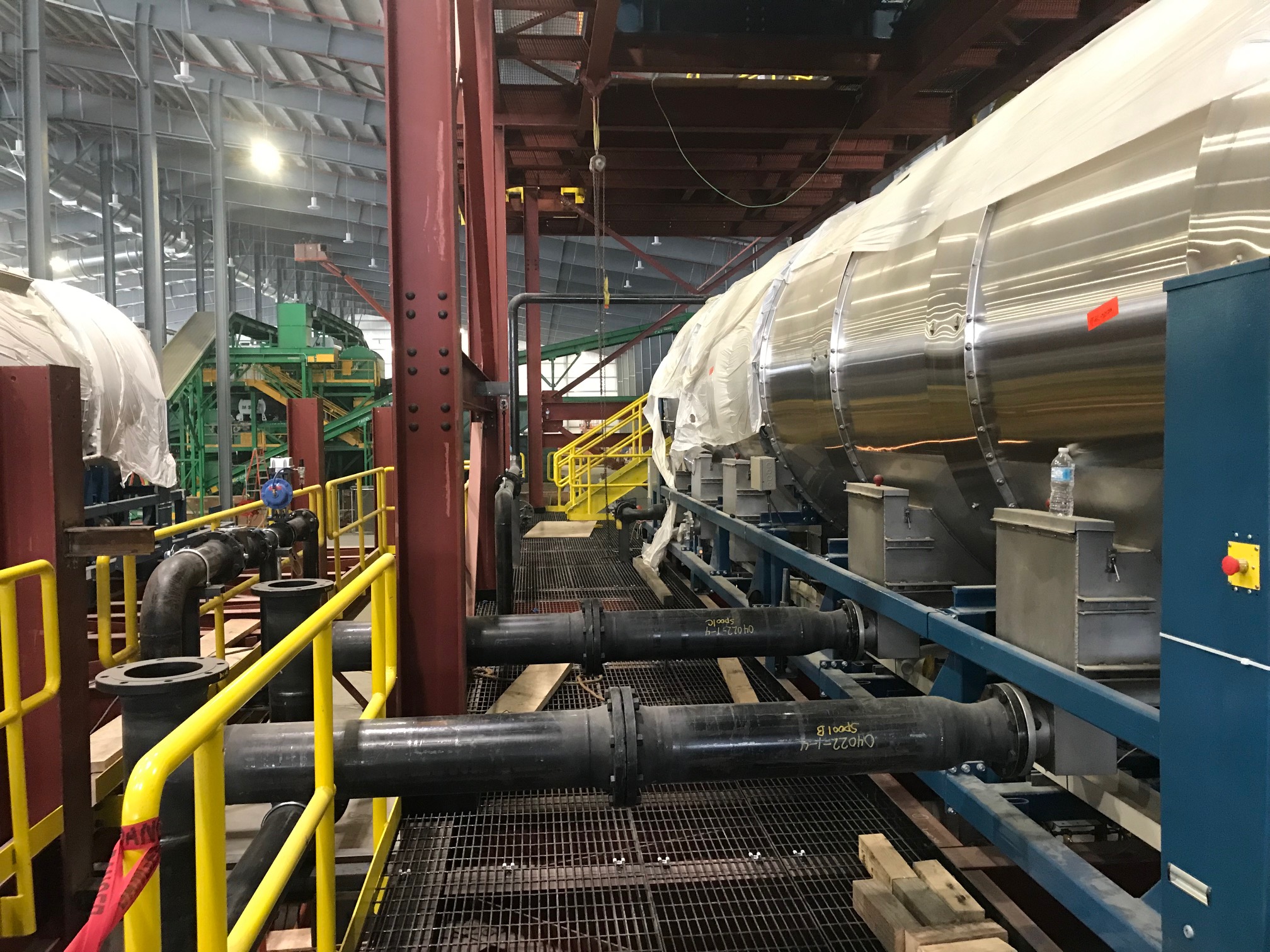 The pulp process will generate clean cellulose for paper products leveraging an onsite wastewater treatment system. Residual wash water will be sent to the anaerobic digester and mixed with organics to produce biogas.

“This pulping of processed waste and the pulp-cleaning process, which gives us a clean, high-quality cellulose, is what’s truly different than [any other facility]. The cellulose, which is 20 percent of the waste stream, is something I can now sell as a product,” says Stuart-Paul.

Clean plastic will be converted to low-grade pellets to make other plastic products. Future plans are to utilize it as feedstock to make liquid fuel leveraging pyrolysis. Later on, a solid plastic fuel will be made and marketed to industrial users as a cleaner alternative to fossil fuels.

So far, Stuart-Paul says, Fiberight has agreements with plastics companies, oil companies and local scrap merchants to buy the cellulose pulp and plastics. A Houston-based national gas company will buy the biogas to place in the pipeline.

Financing and permitting the multi-operational project, which entered its first construction phase in July 2017, were challenging.

“But now, we have it going. The engineering and construction have gone well, and the next step will be optimization of the processes,” says Stuart-Paul. 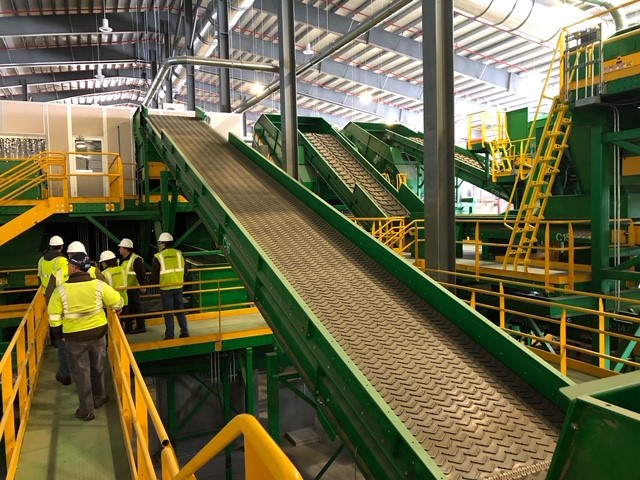 “The communities were looking for long-term, affordable solutions to manage their solid waste. They put a priority on high diversion levels and emerging technologies that enable environmentally sound solid waste disposal,” he says, adding the operation will address these priorities.

“Fiberight technology will divert a wide range of products including traditional recyclables, but by also using wet pulping, they will have the ability to capture additional materials. This is at a time when quality of recyclable materials is of extreme concern due to market downturns, especially with China’s policy,” adds Aronson.

The project concept was in the works long before breaking ground in Hampden. Stuart-Paul’s team logged 10,000 hours proving out the technology and system at a demo plant.

Chip Reeves, MRC board president, commented, “We are proud that we brought this next generation of recycling and solid waste processing technology to our region. The facility is especially important given the rising and somewhat unsustainable recycling costs facing communities today.”

MRC was looking for a developer it believed could adapt to and capitalize on market conditions.

“By processing materials onsite, Coastal Resources of Maine [co-owned by Fiberight and the project’s planner] utilizes a closed loop model. This insulates our members from global fluctuations and keeps recycling affordable. We are looking forward to this spring and early summer as Coastal continues with the full ramp up and begins processing material from all of MRC’s 115 member communities,” says Reeves.

Fiberight currently has three more similar projects in various stages of development and agreement. Stuart-Paul would only say the projects would be on the Atlantic seaboard and larger than the Hampden plant.