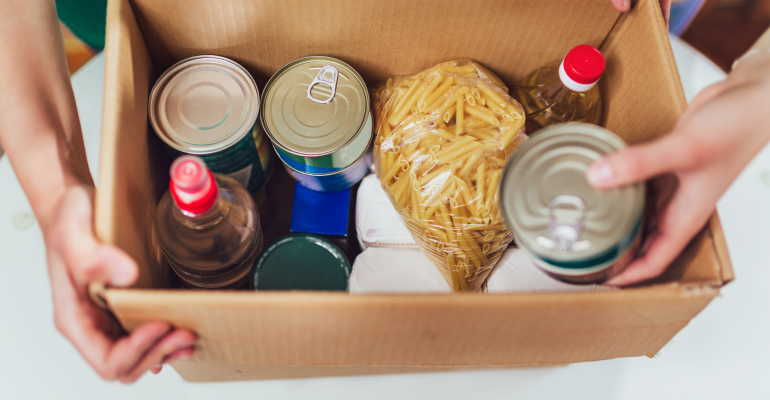 In response to the COVID-19 pandemic causing demand to rise at food banks, Feeding America, a hunger-relief and food rescue organization, has expanded its MealConnect platform and partnered with The Coca Cola Co. and Uber Eats to donate meals to those in need.

“Across the Feeding America network of 200 food banks, the majority of food banks report seeing an increase in the number of people served compared to this time last year with an average increase of almost 60%,” says Justin Block, managing director of digital platform technology for Feeding America based in Chicago, Ill. “It is estimated that approximately 4 in 10 individuals being served are new to charitable food assistance as a result of COVID-19.”

Rising demand is a result of lost wages or sudden expenses due to illness that have affected millions in the U.S. Based upon annual unemployment rising to 11.5 percent and annual poverty rising to 16.6 percent, Feeding America estimates that an additional 17 million people could be food insecure in 2020 as a result of this crisis – for a total of 54 million people, or 1 in every 6 people. This is a 46 percent increase over the 37 million people who were food insecure prior to the COVID-19 crisis (in 2018), according to Block.

“Overall, this pandemic has presented a perfect storm of increased demand, declines in donations of food, and disruptions to the charitable food assistance system’s operating model. And due to rising food insecurity rates, we don’t expect this storm to subside any time soon,” he says.

To boost food donations, Feeding America has expanded services within its MealConnect platform.

Developed in 2014 as a solution for the nation’s charitable food system, MealConnect dashboards allow donors to track donations over time to maximize tax benefits and show their impact in the community. Meanwhile, the platform allows food banks to monitor and track donations, detail when food has been rescued and delivered to a partner agency and share donation receipts with the donor.

“But once COVID-19 hit and food banks faced the triple-whammy of increased demand, decreased volunteer participation and lower food donations because of shifting consumer behavior, we challenged ourselves to stretch and expand the services of MealConnect more broadly,” says Block. “We sought input from food banks across the country, made it even easier for donors to post a donation, and modified some backend architecture that allowed the app to be available everywhere our network is – what once was opt-in is now opt-out.”

“We analyzed traffic patterns on mealconnect.org and reconfigured it to ease access to higher-demand areas of the website, like posting a donation. We also restructured the account creation process, so now a business can simply post a donation and wait for pickup confirmation rather than create an account and wait for approval prior to donating,” says Block. “Those same modifications occurred in the app version. Donors always had the option to take and send pictures of donations to food banks, but now it takes fewer clicks to get there.”

To further expand food donations, Feeding America joined Coca Cola and Uber Eats for a limited promotion to help provide more meals to people in need and raise awareness of the issue of hunger in communities across the country. Funds raised through this program will help to increase food bank capacity to serve those struggling with hunger.

“The Coca Cola Company and Uber Eats are steadfast supporters of Feeding America, contributing both food and funds for our nationwide network of food banks,” says Lauren Biedron, vice president of corporate partnerships at Feeding America. “Both companies provided support at the height of the pandemic and wanted to do even more to engage the public and help our neighbors in need.”

Through June 28, for every order placed via the Uber Eats app from a participating restaurant, Feeding America received a donation to provide one meal to someone in need, with the goal of providing up to 5 million meals.

“The program combined the power of three brands: The Coca-Cola Company and their critical role in the restaurant industry; Uber Eats, which has been supporting and driving demand to restaurants to continue operating through the pandemic; and Feeding America, a nationwide network of food banks that has responded to increased need for food assistance during the pandemic,” says Biedron. “We were excited that two of our partners were able to come together in such a creative way in support of our mission.”