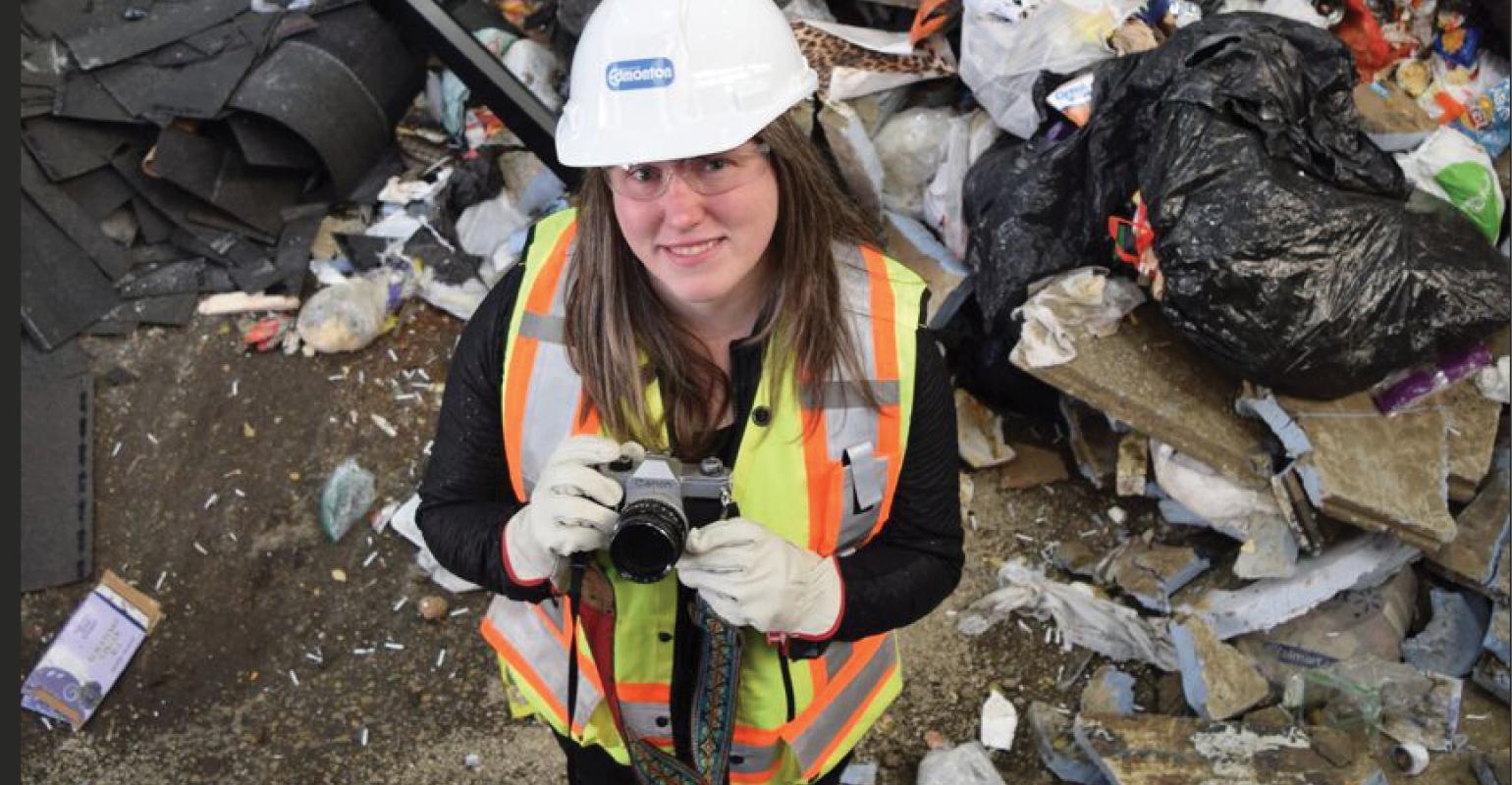 Leanne Olson will spend six months at the site.

Six weeks into her stint as artist-in-residence at the Edmonton Waste Management Centre in Canada, Leanne Olson is letting her work pile up. The piles just so happen to be made of trash.

“I work in conceptual photography, so I’ve been thinking about the piles themselves—the stacking and the hierarchy of the piles. It’s mesmerizing to watch them be built and disassembled daily,” she says.

Olson, who has worked as an artist in Edmonton, Alberta, Canada, for several years, was chosen among roughly 25 applicants to spend six months at the waste management centre. Her residence is sponsored by the Edmonton Arts Council, which has placed artists in businesses and nonprofits throughout Edmonton since 2011. Olson, however, is the first artist to spend time at the waste management centre.

Stephen Williams, grants director at the Edmonton Arts Council, says that Olson’s past body of work caught his eye during the application process. “Leanne really stood out to me because she really already had been looking at issues of recycling, which was interesting to the people at the waste management centre,” he says.

While her tenure has been filled mostly with safety trainings and various orientations so far, Olson has had some time to consider the ideas she’ll grapple with over the coming months. She says decay and loss will loom large, with seasonal change playing a significant role as well.

The program itself was borne out of a desire by the city and the council to have artists participate more in civic life. Williams says past artists have done a lot to highlight different aspects of the community—be it the city clerk’s office or even the cemetery—through their work.

“One of the roles of an artist is to reflect the community to itself,” says Williams. “Hopefully having someone at the waste management centre will, through her work, reflect a part of our society that a lot of us don’t see.”

The Edmonton Arts Council helps its partner organizations find the right artist and pays that artist’s way, but Williams says it’s the partners providing the residences that really make the program possible. “We have the skills, expertise and community connections, but it really takes a champion on the other side as well,” he says.

Olson works primarily in photography, but because of her focus on the printing and physical texture of photographs, it would be misleading to simply call her a photographer.

“The printing is really important,” she says, and she spends much more of her time considering the printing and physical qualities of her photographs than she does adjusting the white balance and perfecting the angle beforehand. 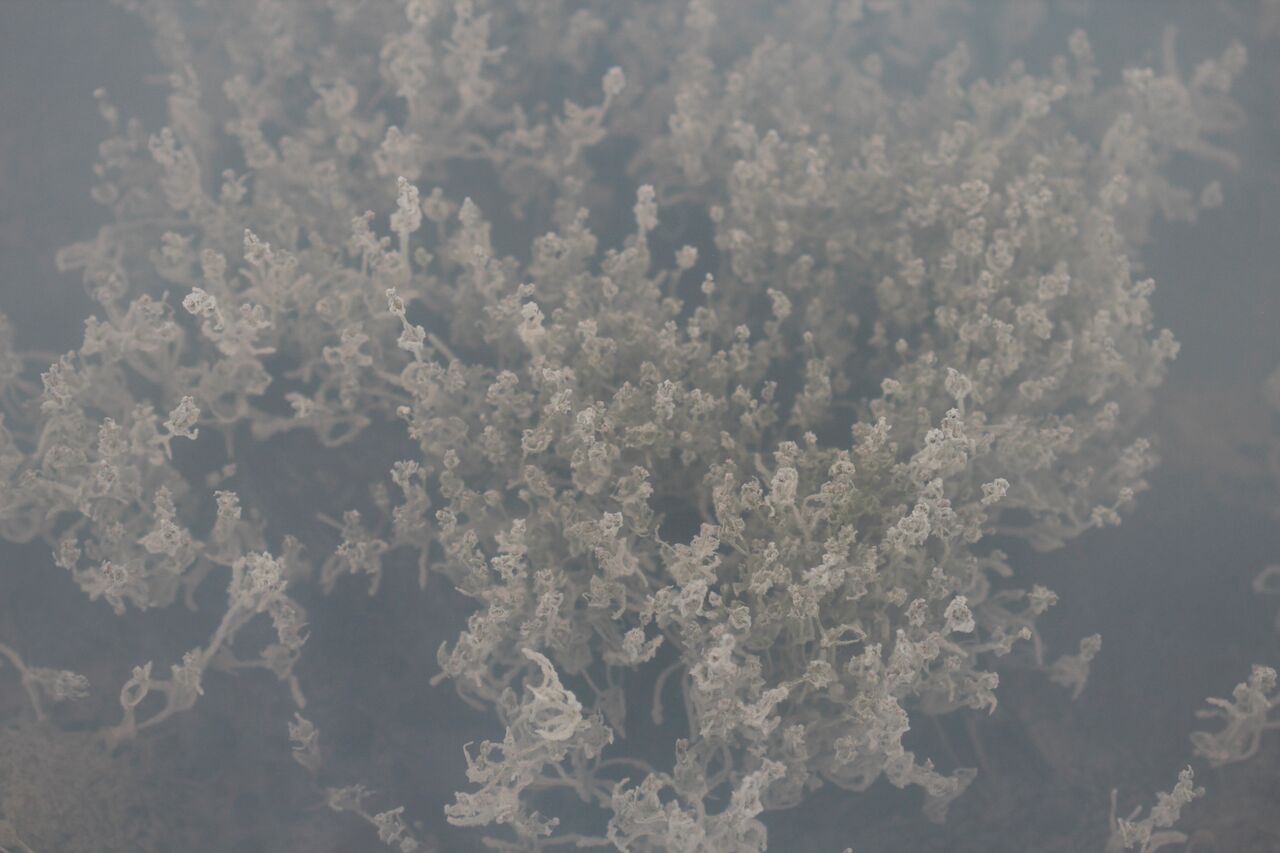 In terms of potential photography subjects, Olson has no shortage of options. The Edmonton Waste Management Centre is an enormous site, spanning some 600 acres and containing multiple lakes and a closed landfill.

Olson has spent time exploring the tipping floor and the construction and demolition area, but she plans to cover a lot more ground as she progresses. “I think I’m going to keep moving around each month and trying out different areas,” says Olson.

Olson’s work will also likely focus on how the appeal of packaging is framed in a different light at the waste management centre. “When I see it here at the site, it’s disintegrated and only some of the brand names are visible,” says Olson.

The artist is also quick to remember that she has many months ahead of her, and what’s interesting now may very well be overshadowed by something new in June. “It’s still new, and I’m not sure how all these ideas are going to work,” she says.

Then, of course, there are the piles.

Olson says she’s interested in how the trash is stacked, especially “how the top never can really stay at the top.” She’s eager to explore that idea and the many connections it could have to society at large.

“I love this program,” says Williams. “I think it’s an awesome way for people to see an artist at work and potentially reflect and absorb new ways of working and thinking.”