Biochar as a Commodity, Not Waste? 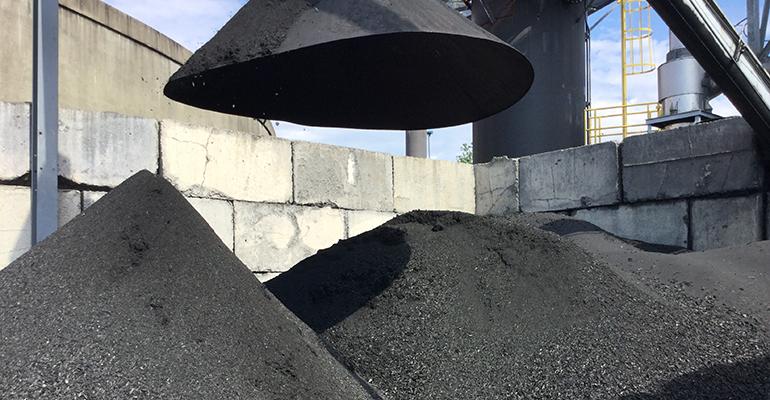 The U.S. biochar market has been slow-growing, but several types of businesses are tapping into the market, including a few waste-to-energy project developers.

Soil scientists have long known that biochar, which can be a byproduct of burning wood, has multiple beneficial uses. Initially, it was discovered to have properties to improve soil health; to this day, soil amendments are the most common commodities made from biochar.

But it has since been used for other applications, such as for environmental remediation, with examples being stormwater filtration, cleanup of landfill leachate and mine reclamation. Biochar also has been used as an additive to improve compost quality and even as filler in some personal care products.

“We have too much biomass in our waste stream. These are beneficial ways to use it, and the solid waste industry is an important source for materials for biochar to ensure that rather than burying or burning it, it’s recovered and serves a purpose,” says Tom Miles, director of the U.S. Biochar Initiative.

The U.S. biochar market has been slow-growing, though 150 companies make and sell products containing this material in North America at some scale. Miles estimates that 45,000 tons are produced in the U.S. And several types of businesses are tapping into the market, from landscapers to a few waste-to-energy project developers. 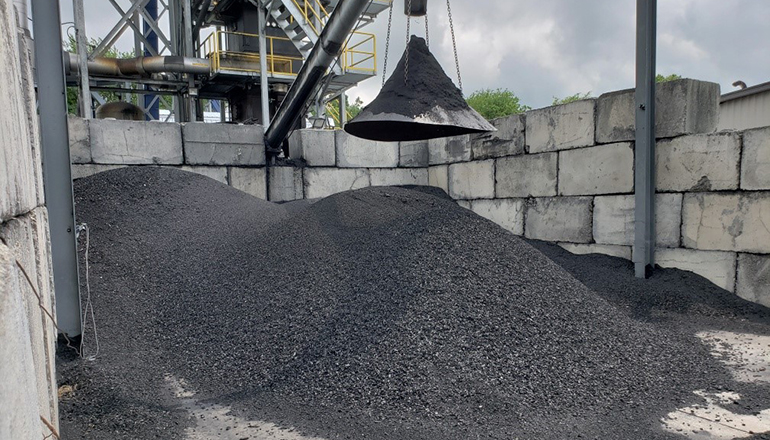 Bartlett Tree Experts, headquartered in Stamford, Conn., buys about 150 cubic yards of biochar a year and uses it as part of its soil renovation process for tree establishment and tree health improvement.

The soils that Bartlett deals with are depleted of organic matter and are very compacted, which impacts drainage and aeration. Staff use a pneumatic air tool to loosen the soil, then add biochar and other organic amendments to help establish roots or restore trees’ health.

“By including biochar in this process, we’ve seen not only increased tree performance and growth but increased ability for plants to defend themselves from pests and pathogens. We documented a 50 percent decrease in stem canker disease, which is caused by a fungus-like organism and common in landscape shade trees,” says Kelby Fite, vice president and director of research for Bartlett Tree Research Laboratories, a division of Bartlett Tree Experts.

The main attributes that make it effective as a soil amendment are its ability to absorb water and capture nutrients that the microorganisms it contains transfer to plants.

Agra Marketing supplies feedstock to Biomass One in White City, Ore., a facility that burns 240,000 tons of dry wood biomass a year to make electricity. Agra Marketing also sells biochar, a co-product of that energy generation process. The company has a mixing and blending facility for soil and biochar products in Tracy, Calif. 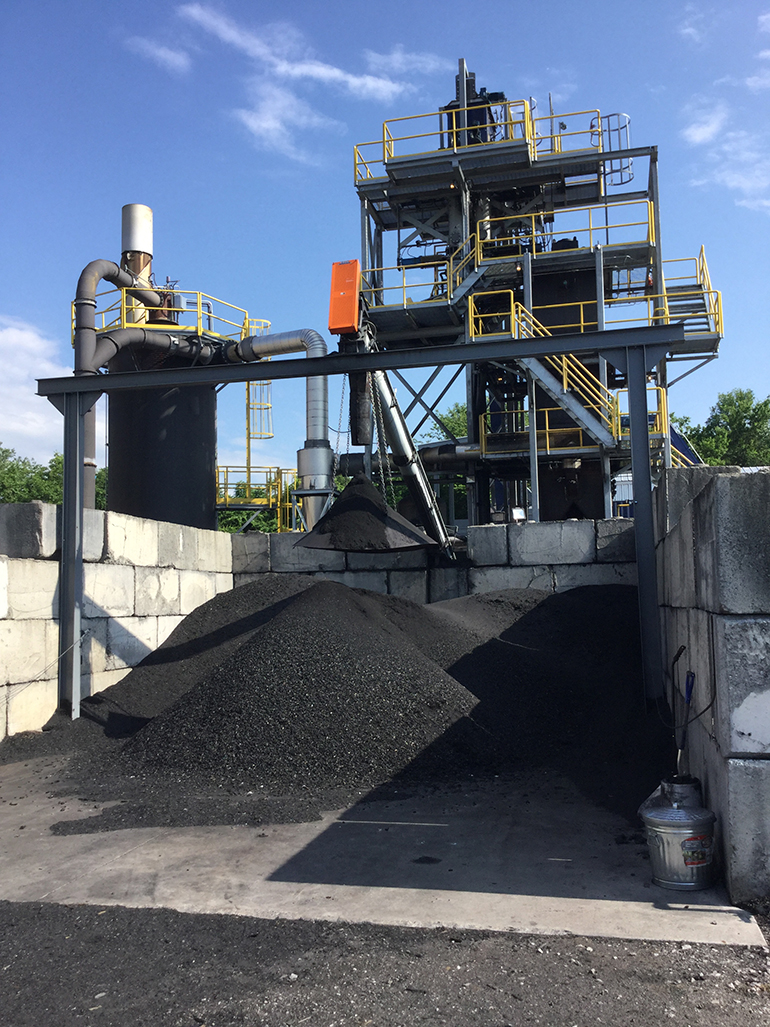 The product is mainly sold as a soil amendment and for stormwater filtration media blends. Some of Agra Marketing’s customers who buy it for these applications are municipalities, recycling facilities, composters and reforestation nurseries.

Agra Marketing’s largest stormwater filtration project is in Santa Cruz County, Calif., where 2 acres are being excavated and filled with biochar and woodchips. Water used to irrigate crops will be collected and piped to this basin.

“Normally, that water would go to a creek and release in the river. But this biochar and woodchips system will enable runoff to be collected. Nitrates and pesticides will be removed, and the groundwater table will be recharged to be able to irrigate. Ultimately, we will not be discharging potentially harmful, nutrient-rich water into a local watershed,” says Grant Scheve, Agra Marketing Group sales and marketing manager.

Many businesses start with the intent to sell biochar. But Aries Clean Energy in Franklin, Tenn., developers of small-scale gasification projects, came into the business for a different reason. 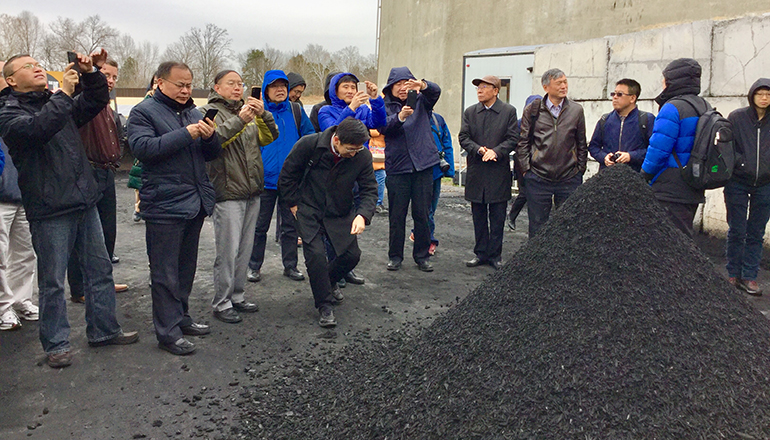 “We are building these energy conversion plants, and biochar happens to be a byproduct that comes out of the system,” says Jeff Snyder, senior vice president of business development for Aries Clean Energy. “So, we are a developer that helps to divert waste wood from landfill and make renewable energy, but we are looking to maximize our revenue stream beyond.”

Aries Clean Energy sells biochar as a soil amendment to residents, on a small scale. The company secured certification by the U.S. Department of Agriculture and the International Biochar Institute. This entails sending samples to a third-party lab to be analyzed for carbon content and to ensure it’s safe, nontoxic and stable.

“Certification opened the doors for us to sell in the retail market … We have good opportunities and are thinking of building a facility just to make biochar. But we are still trying to confirm market size—how much biochar could be consumed annually, and what its true value is,” says Snyder.

Meanwhile, Miles says there have been developments that he thinks could help expand biochar’s reach, such as the introduction of portable equipment.

“You can take the technology from site to site to carbonize wood waste and make biochar as a byproduct. So, wood recyclers and C&D [construction and demolition] recyclers could use it, as can landscapers,” explains Miles. “And because of its insulating properties, some companies are looking at using biochar for building materials. Some are looking at using it as an additive to concrete and asphalt to strengthen them. People who sell biochar are surprised at how many new applications it can be used for. So, I anticipate increased demand.”