Recent
City of Bristol, Virginia Addresses Landfill Benzene Emissions
May 25, 2022
NWRA’s Healthcare Waste Institute Comments on FDA’s Proposed Rule for Medical Devices
May 25, 2022
Leadpoint Remembers Brian Haney, VP of Safety and Compliance
May 25, 2022
Veolia to Sell a Part of Its Industrial Water Treatment Services in France
May 25, 2022
POLL
Bioplastics and Human Behavior: A Real-World Study
May 25, 2022
Episode 12: Let's Talk about Reducing Waste
May 24, 2022
New Landfill in Lake County, Oregon in Planning Stages
May 24, 2022
Power Knot Food Waste Biodigesters Deployed on Carnival Corporation Ships
May 24, 2022
Circular File
brought to you by

Do you remember how the cleaning fluid Windex was treated in the movie “My Big Fat Greek Wedding”? The bride’s father believed it could cure all of life’s ills. The S.C. Johnson Company, which makes Windex, has less ambitious goals, describing it as a cleaning product, not a cure-all. Nonetheless, the company believes a concentrated version can make a dent in our garbage pile.

Windex Mini is a new product: a pouch containing a concentrated refill that, when mixed with water, is an alternative to buying a new bottle of Windex. According to the company, the refill pouch uses 90 percent less plastic than its standard 26-fluid-ounce bottle. Each pouch avoids the transportation of 22.4 fluid ounces, or 1.5 pounds, of water. Let’s put this into perspective: If just one fifth of the 21 million bottles of Windex sold in a year are refilled, 350,000 pounds of plastic (half of which is recycled content) would not be used and 735,000 gallons, or 6 million pounds, of water would not be transported. Sounds like a win-win for the company and for consumers. 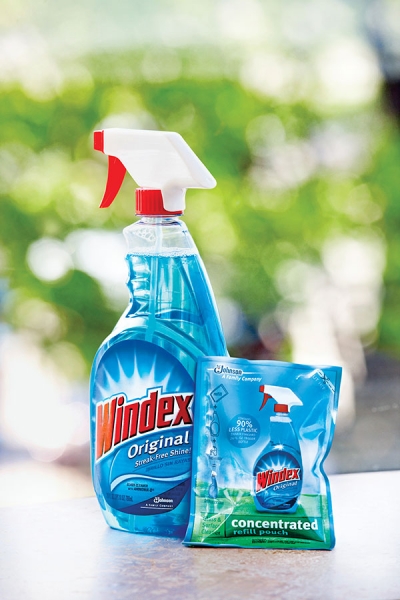 The refills are easy to use. A consumer cuts the pouch’s top, pours the concentrate into an empty bottle, adds water, mixes and voila, instant Windex. S.C. Johnson, however, knows that refills challenge our love of convenience. Instead of launching the product in stores nationwide, the company is proceeding cautiously, testing consumer acceptance of “a very small behavior change that could make a real difference in minimizing waste,” as it contends in a press release, even though it also concedes that “many people don’t want the inconvenience” (which is a polite way of saying we are lazy). As part of the test, the refills are only available online. Customers must buy a three-pack of pouches at a price that is less than that of three bottles, but more than one.

Unfortunately, Americans haven’t shown much love for refills in the past, as cost savings have failed to outweigh inconvenience. As detailed in Ellen Byron’s July 1, 2011, Wall Street Journal article, “Little Package, Small Problem,” refills have not done well here, despite being popular in Europe, where kitchen storage space is at a premium. She also notes that pouches can droop on shelves, sending a negative subliminal message to U.S. shoppers, who seem to prefer their products standing at attention.

I wish S.C. Johnson the best with this product. They are an aggressively green company, touting, among other things, the use of energy derived from landfill gas to power their production facility. Their foray into refills is simply another manifestation of that dedication to sustainability. If they succeed, we’ll all reap the benefits.