It’s no longer an open question; bioreactors do what bioreactor theory says they should do. They manage leachate economically, increase airspace through settlement, generate revenue with landfill gas (LFG) and may even shorten required post-closure care times.

“Bioreactors work,” says Kristy Smith, bioreactor manager with Buncombe County, N.C. “Now the big questions involve what works best? What kind of regulatory flexibility will you need? Should you retrofit existing cells or just start building from scratch when you open the next cell?” 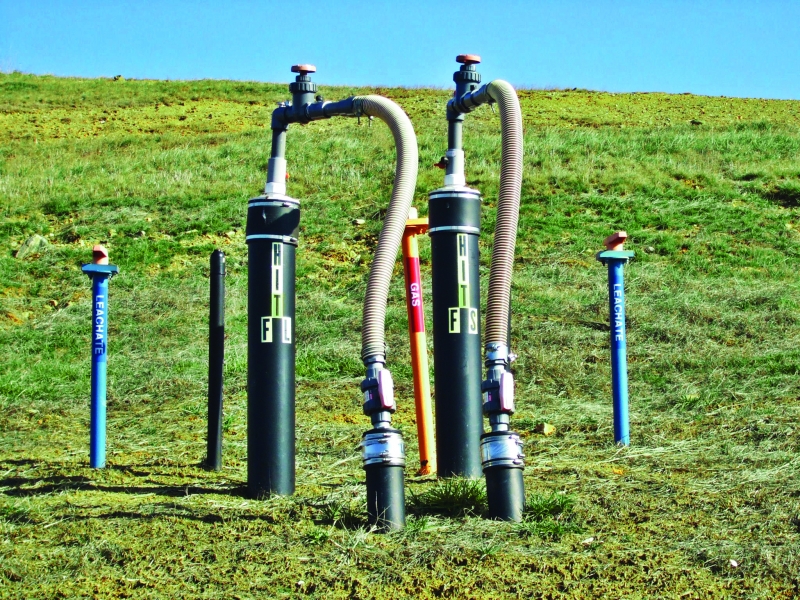 Buncombe County is answering those questions by retrofitting bioreactor cells and building them from scratch at a 95-acre Subtitle D landfill located near Asheville, N.C.

The two kinds of bioreactors will eventually occupy all ten cells in the landfill. Cells 1 through 5 have been filled to capacity. Cell 6 is partially filled. Cell 7 will begin operation in 2015.

The facility is part of a national pilot program run by the U.S. Environmental Protection Agency (EPA) called Project XL (eXcellence in Leadership), which tests environmental innovations. Project XL developed more than 50 projects, including several bioreactors, between 1995 and 2002. The Buncombe County bioreactor is one of 13 Project XL undertakings that remain active.

The Buncombe County project began in September of 2000, two years before the EPA issued its Research, Development and Demonstration (RD&D) rule, under which most bioreactors operate today. The process, however, is the same. Under both Project XL and the RD&D rule, federal and state environmental projection agencies regulate and monitor research projects, occasionally granting permission to test alternatives to what the regulations typically require. 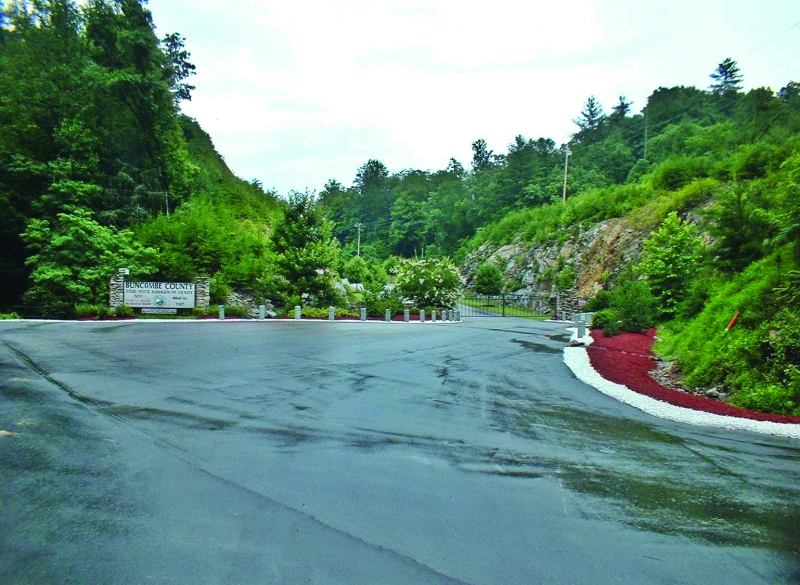 At the Buncombe County landfill, for instance, cells 1 and 2 employ a prescriptive Subtitle D liner system that consists of a 24-inch soil barrier layer with a maximum permeability of 1 X 10-7 centimeters per second (cm/sec), a 60-mil (one mil equals 1/1000 of an inch) high-density polyethylene (HDPE) liner and a 24-inch rock drainage layer.

Regulators have approved an alternative liner system for the remaining cells. That system uses an 18-inch soil barrier layer with a maximum permeability of 1 X 10-5 cm/sec, a geo-synthetic clay liner, a 60-mil HDPE liner and a 24-inch rock drainage layer.

Alternative liner systems aren’t uncommon. “Many landfills ask for and receive approvals to use alternative liners because of the scarcity of clay, and that is true here,” says Christopher J. Gabel, PE, BCEE, solid waste discipline leader with the Cambridge, Mass.-based engineering firm of CDM Smith and project manager on the Buncombe County project.

Finally, the EPA has granted the county permission to recirculate leachate as well as other liquids. Current regulations permit recirculating leachate only.

At the Buncombe County facility cells 1 through 5 are currently operating as landfill cells retrofitted to become bioreactors. Now under construction, cell 6 will be constructed as a bioreactor as the waste is added. So will cells 7 through 10.

Because of the way retrofit bioreactors must be constructed, they do not operate as efficiently as those built from scratch.

“It’s much harder to wet the waste in a retrofit facility,” says Gabel. “Here we are using mostly surficial gravity trenches (SGTs), meaning trenches that are relatively close to the surface.”

To construct an SGT, a backhoe excavates waste down to about 11 feet. Buncombe County excavated five SGTs ranging in length from 450 to 600 feet. A perforated pipe goes into the bottom of the trenches, which are then backfilled with rock, fabric and waste.

The design of the bioreactor also called for six horizontal injection trenches (HITs) at intermediate depths.

Anticipating that the project would be approved, Gabel’s team installed three HITs when the top of the waste was at an elevation of 2,040 feet from the base of the landfill. They are about 400 feet long and spaced 100 feet apart. Three more HITs went in about 40 feet above that.

“In a build-as-you-go bioreactor, we would install HITs every 30 vertical feet and space them about 100 feet apart, starting at a much lower elevation,” Gabel says. “That means many more conduits to get liquid into the landfill.”

With far fewer HITs, then, the retrofit has limited recirculation capabilities and that restricts the efficiency of the bioreactor.

HITs are more efficient than SGTs at wetting landfill waste. A bioreactor may pressurize HITs up to 10 pounds per square inch. Because they are installed at such shallow depths, SGTs must rely on gravity to move leachate into the waste. Regulators fear that a pressurized feed that close to the surface could cause leachate seeps from the side slopes.

All of the SGTs and HITs in the retrofit system were designed to collect gas as well as recirculate leachate. “The addition of gas collection was seen as a control if gas releases became an issue,” Gabel says. “We never considered this a comprehensive gas collection system. Later, when we decided to install a landfill-gas-to-energy project, we installed 25 vertical gas collection wells.”

That made it possible to dedicate all of the SGTs and HITs to leachate recirculation.

The recirculation process typically injects 30,000 gallons of leachate into one or two HITs and 8,000 gallons into a couple of SGTs on a rotating schedule that allows time for the liquid to drain through the waste mass. The process takes two to six hours. If it rains, Smith reduces or even suspends the process.

Following each injection, inspectors check the side slopes for leachate seeps. “Our goal is to capture and minimize any leachate that seeps out of the sides,” Gabel says. “In fact, we monitor constantly for seeps. Because of the heterogeneous nature of the waste, leachate might at any time find a path to follow to daylight.”

Based on the experience gained from operating the retrofit bioreactor, Smith and Gabel have high hopes for the next bioreactor, which they are building from scratch.

The construction team has just begun installing the first 6 HIT trenches in cell 6. Gabel says they should be complete by July. Leachate injections will begin after waste has covered the trenches. 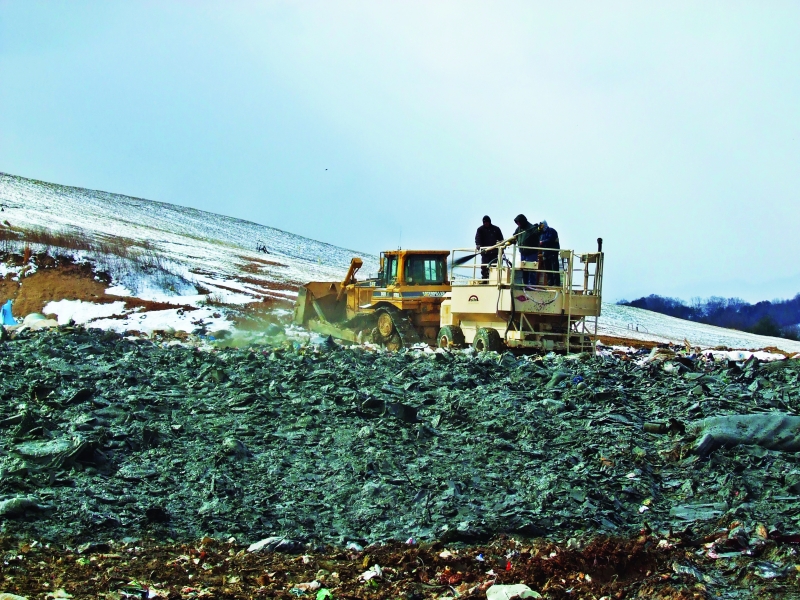 “We’re confident that the build-as-you-go phase of the project will increase gas production, because the wetting program will be done at a higher level,” Gabel says. “Our goal is to recirculate all of the leachate generated on site and eliminate trucking it away for treatment. We’re not there yet because of the limitations in the retrofit facility.”

Another problem has been the need to suspend recirculation at times during the winter.

As decaying materials produce leachate and landfill gas, the temperature of the waste rises to 90 to 110 degrees. Adding cold leachate — at say 40 degrees — during the winter can lower the core temperature of the cell and slow or even shut down the biological activity.

“In the new cells, we’re using Posi-Shell,” Gabel says. “It’s a spray application that sets up hard but breaks apart the next day when you add waste. We believe this will help the wetting program too.”

Gabel and Smith have closely monitored the biological activity in the retrofit unit.

To track stabilization, they monitored the changing ratio of biological oxygen demand (BOD) to chemical oxygen demand (COD). As the ratio declines, it indicates that decomposition is stabilizing the waste. A chart tracking the declining ratio for each Buncombe County landfill cell shows the ratio rising through 2007 as biological activity increased and then falling steadily through 2010 as stabilization occurred. 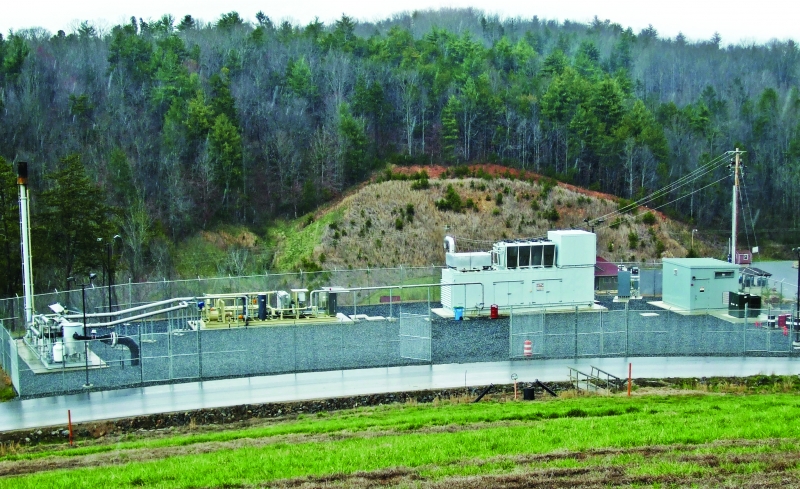 “Water addition definitely helps with stabilization,” agrees Gabel. “There is loss of mass as the waste is converted to gas. Then as the waste settles and becomes more dense, we’re seeing more airspace.”

To track settlement, Gabel installed a set of settlement plates on top of the retrofit landfill and periodically surveyed their elevation. “A chart of the changes in elevation of the various settlement plates shows that some plates have settled much more than others,” he says. “Settlement is localized in the retrofit. That goes back to the problem of distributing the leachate. Areas closer to the wetting trenches show more settlement. We expect to see less of this problem in the build-as-you-go unit.

Recirculating leachate has saved the county a substantial amount of money. As of 2010, county estimates showed savings of about $78,000 in avoided costs for hauling and treatment. Once cell 6 begins operating, Smith expects to recirculate all of the leachate produced during the spring, summer and fall. Leachate trucks will have to run during the winter when recirculation ceases because of cold weather.

Then there is the post-closure care issue: “We think there is a distinct possibility of shortening the closure care period because the need for monitoring will be less,” says Gabel.

While Gabel declines to discuss costs, he will say that the bioreactor investment made by Buncombe County appears to be producing a reasonable return on investment in the form of airspace gains, savings on leachate hauling and treatment, revenue from gas generation and prospectively a shortened post-closure care period. He expects the return to grow as the build-as-you-go cells come online and go to work.

SIDEBAR: What Is A Bioreactor?

As part of the EPA’s Project XL (eXellence in Leadership), the Buncombe County landfill aims to build working bioreactor cells.

Many observers, however, question the need take a bioreactor to the 40 percent liquid level, noting that a landfill that recirculates leachate at a level of say 30 percent may deliver all of the benefits of a bioreactor without the added regulatory requirements that bioreactor operators must contend with. -- Mike Fickes