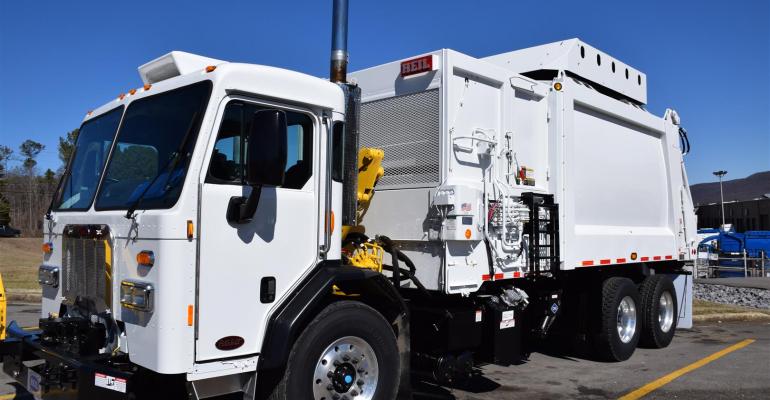 In 2005, the story about the Cuyahoga Falls Sanitation Department in Ohio could be summed up in one word: Red.

“We started doing this in phases. We had a five-year phase-in period for trash and then afterwards, we had a three-year phase in for recycling.

The plan, he says, was necessary.

“Year after year, we were spending more money than we were bringing in. So we started looking at what our options were,” he says.

Automation, he knew, could bring a reduction in overhead. One worker on a rear-loader would replace a crew of two or three, for example. Reduced tonnages could lead to lower tipping fees by keeping moisture content out of the waste stream.

Novak began transitioning the fleet in 2005. By 2012, the solid waste fleet was fully automated, reducing the number of routes and employees who ran them, and dropping fuel usage by 20 percent. Most importantly, according to Novak, it resulted in reduction of solid waste tonnages previously averaging 20,000 tons per year.

Today, Cuyahoga Falls has nearly 25 vehicles in its sanitation garage including ¾-ton pickup trucks and five-ton garbage haulers servicing 17,000 customers along seven routes. Four vehicles collect trash and three collect recyclable materials, and each is operated by a single person who makes 800 tips per day.

The city now averages 15,000 tons of waste per year—5,000 tons less in tipping fees—which saves $215,000 per year. Recycling tonnages increased by 50 percent, says Novak, which brings in more money. And the department has been back in the black for nine years.

The city is transitioning to automated yard-waste pick-up, as well. Citizens bundle waste or put it in paper bags for pickup. But moisture and weight issues cause torn bags and spilled waste at the curb. The carts, says Novak, will stop that. The city is adding another 1,000 carts into the voluntary program this.

Introducing automation to the city’s residents took time and patience.

“We had little neighborhood meetings as each area was carted, says Novak. We would have different-sized carts and information for them. Anyone who showed up could look at them or complain about them. They could come to those little meetings and get questions answered.”

The program generally was accepted, says Novak. Some residents in an older part of town with limited space in garages or no garages, voiced concerns with the larger carts.

Additionally, the meetings allowed the city to remind customers that issues like lost trash can lids, knocked over cans, and animals getting into the private trash cans and bags would be a thing of the past with the new containers.

“We offered two sizes. We didn’t want to get crazy and have to stock all kinds of different sizes and different lids and wheels and all that. So we picked two different sizes for full service and then limited service customers.”

The citizens weren’t the only ones who needed convincing, says David Johnson, vice president and general manager of the Ohio Division at Bell Equipment, and the area dealer who sold the Heil automated vehicles to the city. The workers, too, had to learn their way around automation. Cuyahoga Falls first bought a Heil Retriever Satellite Side Loader. It also bought a Heil DuraPack 5000 Rear Loader and, later, a Heil DuraPack Python Side Loader.

The very first automated truck the city received, was forced on the lowest seniority employee in the Sanitation Department, says Johnson. Choice of trucks each year goes by seniority.

“So I thought it was funny. Here’s an automated truck where the guy is going to stay in the cab during the summer when it’s hot and be in the air conditioning. In the winter, he’s going to be heated. And nobody wanted to take it out, so it went to the low man on the totem pole. And he loved it.”

“It was fun to watch how the guys came around to automated,” Johnson says.

As the city looked to replace its fleet, it followed the trend, but changing trucks was not without lessons learned.

The first trucks purchased did the work, but were banged up in the process. Novak says the trucks leaked, and problems arose. On the recycling end of it, the glass tore holes in the floors of previous trucks, which would leak small glass fragments onto the streets.

“When the sun was out you would see it glistening. Then you would get calls saying one of your trucks was leaking,” he says.

Before long, the city began calling for city-wide use of Mack trucks in all divisions. The Heil line of trucks fit the bill for a better, longer-lasting, and better-built body, says Novak. Consistent city-wide vehicles simplified repairs and maintenance, and reduced costs.

“The Heil components, like the hydraulics and electrical systems, are just easier to access, making repairs faster and easier,” says Novak. “We also like the amount of room behind the Heil packer blade that enables easier cleanouts and serviceability. All of these things, big and not so big, made our decision—and conversion—clear-cut.”