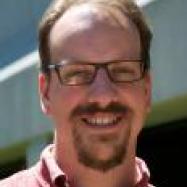 Steven Averett joined the Waste Age staff in February 2006. Since then he has helped the magazine expand its coverage and garner a range of awards from FOLIO, the American Society of Business Publication Editors (ASBPE) and the Magazine Association of the Southeast (MAGS). He recently won a Gold Award from ASBPE for humor writing.

Before joining Waste Age, Steven spent three years as the staff writer for Industrial Engineer magazine, where he won a gold GAMMA Award from MAGS for Best Feature. He has written and edited material covering a wide range of topics, including video games, film, manufacturing, and aeronautics.

Steven is a graduate of the University of Georgia, where he earned a BA in English.

From the Driveway to the Runway
Mar 01, 2008
The sanitation district in muncie, ind.,is literally trading in the shirts off its workers' backs to go green. This spring, employees will be outfitted in clothing made from the very same recyclable bottles and cans...
Mommy Greenest, A Grave Situation
Feb 01, 2008
Mommy Greenest ...
Beautiful Beasts
Jan 01, 2008
Putting attractive garbage trucks on the road is not only good for business, it's good for the community. And sometimes looking good involves more than simply keeping a truck clean and maintained. A slick paint job or...
HAUL TALK
Jan 01, 2008
Up in Smoke ...
HAUL TALK
Dec 01, 2007
Post-Election Collection ...
Old Tannenbaum
Dec 01, 2007
Partnering with recyclers to keep Christmas trees out of landfills.
HAUL TALK
Nov 01, 2007
Not Your Average Pic-a-nic Basket
Glad Tidings
Oct 01, 2007
Trash bag ads on garbage trucks help NYC anti-litter campaign.
HAUL TALK
Oct 01, 2007
The 11th Plague ...
HAUL TALK
Sep 01, 2007
Scent of a Trash Bin ...
Load More