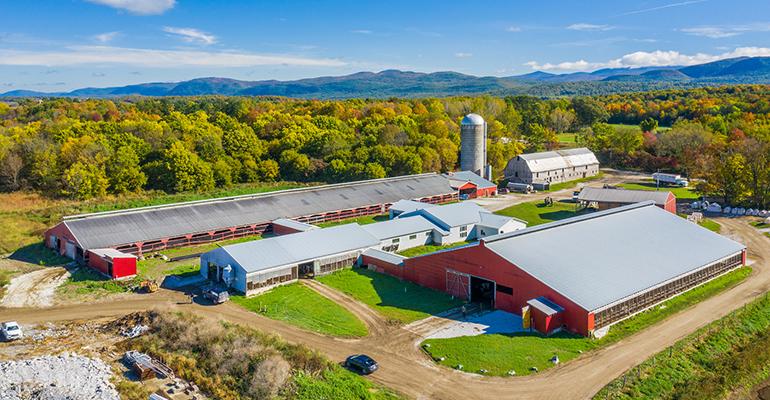 An impending organics waste ban and a desire for cleaner fuel in Vermont have sparked the development of a farm-powered anaerobic digester.

An impending organics waste ban in Vermont, the desire for the state’s utility to provide renewable natural gas (RNG) to its customers and a college and family farm looking to operate more sustainably sparked the development of a new partnership in Salisbury, Vt. And for Wellesley, Mass.-based Vanguard Renewables, getting involved with that project was a no-brainer.

Vanguard is in the process of building an anaerobic digester (AD) at the Salisbury-based Goodrich Farm that will process 100 tons of cow manure and 180 tons of organic food waste daily into RNG. Construction on the farm-powered digester will be completed in 2020. RNG produced there will travel by pipeline to Middlebury College’s main power plant. Once the digester is fully operational—likely by June 2020—the gas it creates will supply about half of the energy that Middlebury College uses for heating and cooling. The college’s biomass plant will continue to produce the other 50 percent. 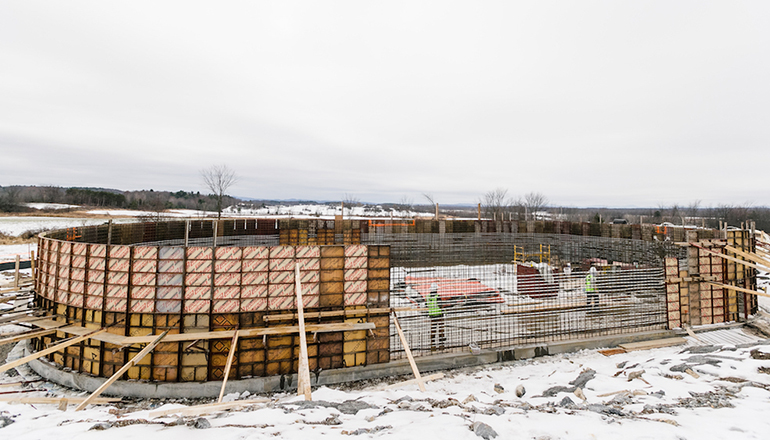 This project has been in the works for almost a decade now. Vanguard Renewables’ Executive Chairman and CEO John Hanselman explains Vanguard got involved about two and a half years ago even though Middlebury College and Goodrich Farm had been working on the project conceptually for about six or seven years prior.

“They had not been able to get it off the ground, and they had different attempts at trying to bring all the different components together and had struggled,” says Hanselman. “We were lucky enough to get a phone call from the farm asking us to come up and take a look to see if it would make sense. We immediately saw the opportunity and said, ‘Yeah, this is something that has to get done.’”

“Looking at the convergence of the pending organic waste ban in Vermont and the desire by the gas utility for the state, Vermont Gas (VGS), to create renewable natural gas for their retail customers, it seemed like a no-brainer,” he adds. 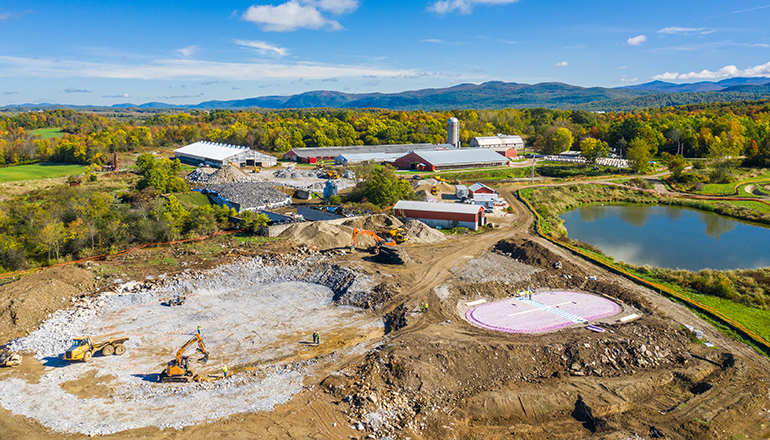 VGS has begun construction on a 5-mile pipeline that will connect the farm with the company’s pipeline network in Addison County. The digester is expected to produce 180,000 Mcf per year (a Mcf is 1,000 cubic feet of renewable natural gas). Middlebury College will buy 100,000 Mcf of the gas from Vanguard, VGS will buy 40,000 Mcf and Vanguard will retain 40,000 Mcf.

“VGS has been interested in the promise of renewable natural gas for many years, and we were thrilled when Vanguard Renewables actually took over this project, which had been languishing for a few years,” explains Don Rendall, president and CEO of VGS. “We are so excited to work closely with Vanguard and Middlebury College to bring the project home. This is such a unique opportunity for us to have a renewable source of supply so close to home and one that we were able to serve with our gas distribution infrastructure.”

Bringing in the Organics

Vanguard expects to begin taking in manure from the farm around April or May 2020, with food waste expected for May or June. Construction for the AD began in August and is nearly 40 percent complete.

The digester will take in 100 percent of the farm-produced manure and remove all the gas from it, explains Hanselman, noting that it will likely reduce the odor signature of the farm by roughly 85 percent. The farm also will utilize the free organic fertilizer produced by the digester.

“When we’re through taking all the gas out of the food waste and the manure, we are left with this wonderful, high-nutrient liquid and it turns out that is an incredibly powerful organic fertilizer,” says Hanselman. “We do that on all our existing five farms in Massachusetts. We’ve also extracted the solid component from the manure and the food waste, and we give that back to the farm as bedding material for the cows. We’ve reduced their reliance on synthetic fertilizer and decreased their costs for that and the bedding of all their animals.”

From the digester, the farm also will benefit from free heat, liquid fertilizer that will reduce reliance on chemical fertilizers and a reduction in phosphorus levels and greenhouse gas (GHG) emissions.

Located on more than 2,400 acres, the Goodrich Family Farm is a generational dairy farm with 900 milking cows. It is a member of the Agri-Mark Cabot Creamery Cooperative. 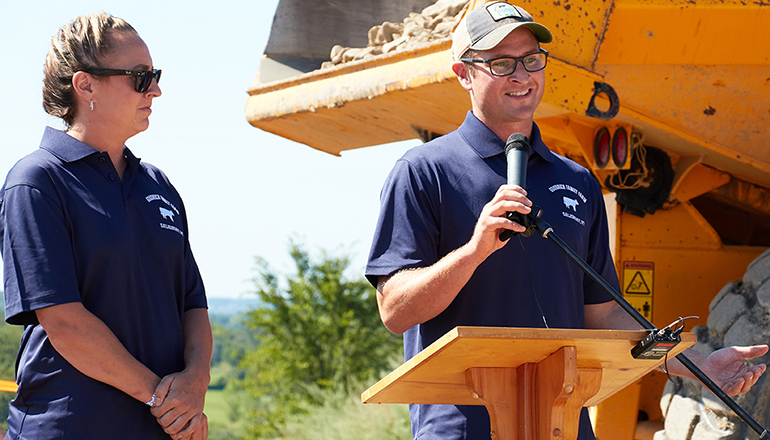 “Our family is excited to see this project transition from a dream into a reality,” said Chase Goodrich, who is among the fourth generation of his family to operate the farm, in a statement. “The digester has been under discussion for a very long time, and now we could not be more encouraged to move our farm in a new direction.”

“We constantly seek innovative ways to be good stewards of the land and practice sustainable and viable agriculture,” he added. “The digester will help continue to make this possible.”

The food waste that will help feed the digester will come from all over Vermont at a time when food producers and users statewide must comply with Act 148, Vermont’s Universal Recycling Law. The measure bans all food waste from landfills and takes effect in 2020.

Hanselman explains that there has been a lot of concern in the state of how to keep up with the ban because composting, another alternative diversion strategy for organic waste, has been pretty much maxed out. So, Vanguard has begun negotiating with many major food manufacturers in Vermont.

“There is a very large dairy community—all the ancillary dairy products like cheese, ice cream, sour cream and milk—and all the waste streams from those guys will come to us,” says Hanselman. “Our bugs especially love ice cream, so we’re in the right state. There is a pretty large brewery, and every municipality and institution is looking to see how to comply with the state’s food waste ban, so we’ll be getting in touch with them as well.”

“Vermont’s ban is for 100 percent of organics, so it’s a pretty huge order to take an entire state off landfill,” he adds. “The hauling community is also scrambling to figure out how they’re going to aggregate that material efficiently and get it to us.”

Many colleges in the United States strive to be environmentally responsible, and there are many ways to do that on campus. The two biggest carbon contributors on campus, says Hanselman, are electrical and thermal loads. Electrical can be handled by either buying or installing wind and solar. But the thermal load, which is all the heat and cooling, is tricky and historically has been impossible to offset with renewable sources.

“What’s really cool about what’s going on at Middlebury [College] is we are replacing 100 percent of their heating load with renewable natural gas,” explains Hanselman. “It’s a landmark decision on their part to commit to it because it is more expensive than regular fossil gas. It is a big commitment on the part of their trustees and the college, but it is something they felt was absolutely necessary to do as part of the commitment that they made to students to get to a fully zero net campus. Middlebury always has been at the forefront of environmental commitment, so by taking 100 percent of their thermal use and converting it to renewable natural gas, they have kind of thrown down the gauntlet for the rest of the higher-ed community to do the same thing.”

Using 100 percent renewable energy sources is one of the components outlined in Middlebury College’s Energy 2028 plan, which the college announced back in January. The 10-year plan also calls for reducing energy usage by 25 percent, divesting Middlebury’s endowment of investments in fossil fuels and educating and involving the entire campus community in its implementation.

“One of the key components of Middlebury’s Energy 2028 plan is to shift the college completely to the use of renewable energy,” said David Provost, Middlebury’s executive vice president for finance and administration, in a statement. “The digester is fundamental to this change.” 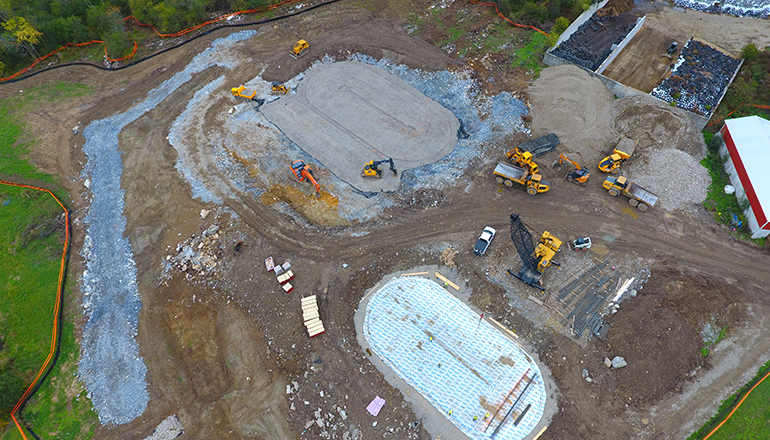 “Another exciting aspect of the digester is how it further connects the college to the local community and Vermont,” said Laurie Patton, Middlebury College president, in a statement. “The college’s interest in pursuing the facility also reflects our longstanding commitment to innovative environmental education and sustainability projects. Building on our carbon neutrality initiative, it will provide our students and faculty with new research and teaching opportunities.”

Reducing GHGs also is one of the most important things that any public utility, especially a natural gas utility, can do for its stakeholders, notes Rendall.

“Renewable natural gas is a fantastic opportunity to deliver significant greenhouse gas emissions reductions to our customers using a modern and resilient infrastructure that is already serving our customers with an incredibly affordable and clean fuel,” he says. This is a full step forward in reducing the GHG emission impacts of the product that we provide to our customers.”

VGS has set a goal that by 2050, the company and its customers will have eliminated their greenhouse gas emissions entirely. Because 2050 is a long way off, VGS has set a course that will drive its emissions down by 30 percent in the first 10 years. 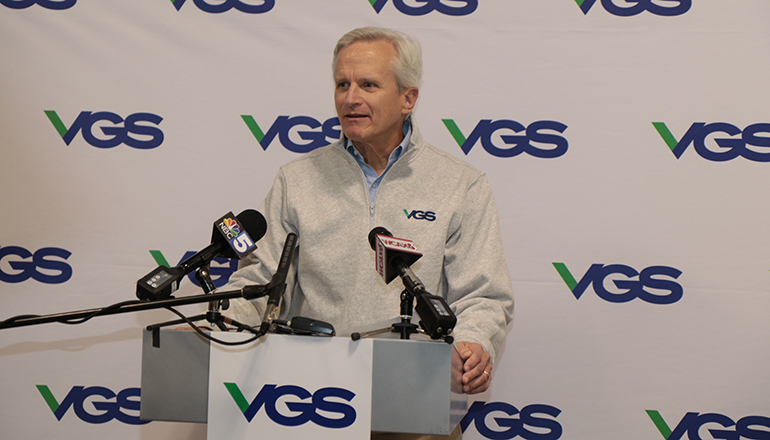 Rendall emphasizes that VGS, through more partnerships like this, is committed to achieving that goal through the actions it is taking now and by doubling down on energy efficiency investments.

Overall, this AD project is expected to produce roughly 200,000 MMBTUs (one million British thermal units), which is roughly equivalent to 2.5 megawatts of electricity a year—or like taking 2,500 homes off the electric grid, says Hanselman.