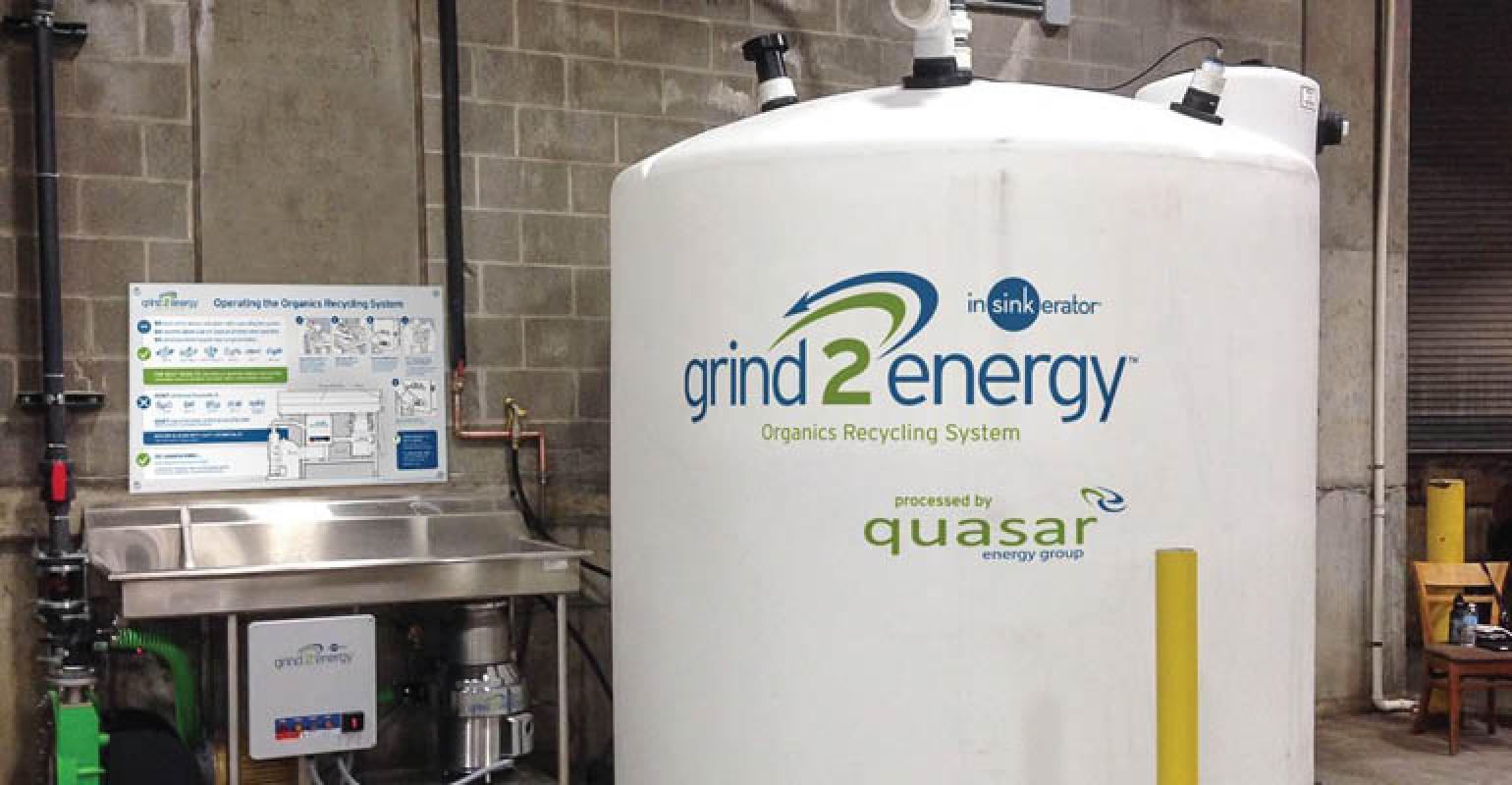 The company is working with Whole Foods, Northgate Markets and a few other grocers in New Jersey, Pennsylvania, Connecticut, Massachusetts, California and Wisconsin.

About one-third of the food produced worldwide each year gets wasted, reports the United Nations; some studies show less than 5 percent of it is recycled. Meanwhile, six states have banned commercial food waste from landfills and several others are leaning toward banning or restricting it, leaving high-volume generators with a predicament, as their decomposing waste fast amasses.

Through its technology called Grind2Energy, InSinkErator, an Emerson business, is capitalizing on what it projects will be a growing need. The Racine, Wis.-based company offers generators of at least one ton of food waste a week a way to divert from landfill and bypass the sewer system, while creating electricity, heat or compressed natural gas.

Grind2Energy captures food waste and turns it to slurry, which goes into a holding tank, is pumped to a transport tank and taken to anaerobic digestion facilities where it is turned into renewable energy.

The Environmental Protection Agency estimates that if half of the food waste created in the country each year were anaerobically digested, it could help create energy to power 2.5 million homes for that year.

A tool for supermarkets

“We have over 50 installations across the county, mainly at supermarkets, which can each produce up to 10 tons of organic waste a week,” says Michael Keleman, InSinkErator’s manager of environmental engineering.

The company is working with Whole Foods, Northgate Markets and a few other grocers in New Jersey, Pennsylvania, Connecticut, Massachusetts, California and Wisconsin.

“Our commercial customers are saving in waste hauling emissions and costs, reducing odors and vectors, eliminating the need for open-air trash bins and compactors and saving cooler storage space.”

Milwaukee’s Metropolitan Sewerage District (MMSD) is among those who take in the food waste slurry. It mixes it with sewage sludge, containing micro-organisms, inside an on-site anaerobic digester. Combining food waste with the micro-organisms has boosted methane gas production, which is converted to energy to power the plant.

“This will help us attain our goal to become energy independent by 2035. And it’s helping us reduce the cost of our services for our 1.1 million customers,” says Bill Graffin, MMSD public information manager. The district uses residue from the process to produce a fertilizer.

While supermarkets are its largest customer base, InSinkErator has expanded its reach to casinos, sporting venues and hotels.

Northgate Markets has introduced the system across its Southern California stores.

“Grind2Energy has given us a way to dispose of this waste in a clean, orderly way without spending a lot of time or taking up valuable space,” says Keith McCarron, director of distribution for Northgate Markets.

The technology is also helping Northgate and some of the state’s other food stores meet guidelines of the Mandatory Commercial Organics bill,  requiring high-volume commercial operations to divert food waste from landfills.

Research done at Western University in Ontario showed that adding slurry to a digester translates to more efficient digestion and more methane. For a digester at a plant serving 100,000 people, adding enough slurry to increase flow by 15 percent more than doubled biogas production.

But getting wastewater treatment plants to buy in has taken work.

“These plants are focused on regulations, and the idea of managing food waste is not their top priority. Only the most progressive ones are thinking of this, says Keleman.

“It’s a unique opportunity for them to become utilities of the future, which means focusing not just on public health and clean water . It also means focusing on fuel, fertilizer and, ultimately, becoming energy dependent.”

Other companies, like quasar, offer similar products and services. There also 181 anaerobic digestion facilities processing municipal solid waste in the U.S., according to  the Environmental Research & Education Foundation (EREF).

As far as InSinkErator’s impact as one company, as of September 2016, Grind2Energy customers diverted 7,400 tons of food waste. They reduced greenhouse gas emissions equal to 11.9 million vehicle miles. And their slurry produced 2.5 million kilowatts of power.