Comparison of Anaerobic Digestion in the EU vs. the U.S. - Part Two 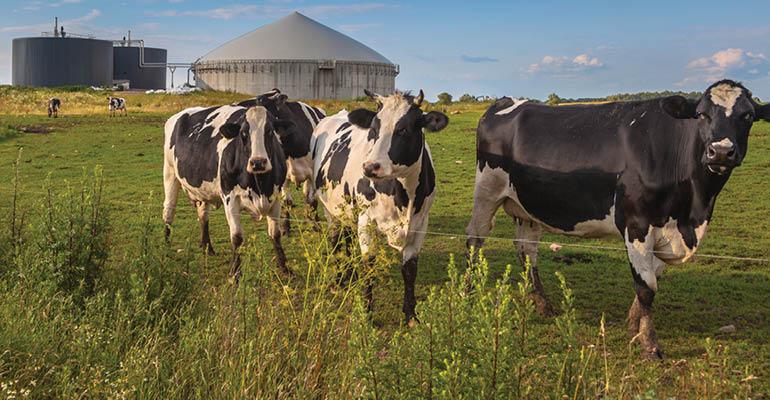 In addition to energy sales, revenues for AD facilities primarily derive from two other sources: (1) disposal tipping fees and (2) from the sales of compost and soil amendments which differ considerably between the EU and the U.S. The following discusses the impact of those two factors on AD development.

Historic and Current Market Factors in the EU

In the absence of regulations affecting pricing, landfill disposal is usually a less expensive end destination for organics. Therefore, relative tipping fees are a significant factor for assessing the business case for AD. The higher the landfill tipping fee, the more attractive and cost competitive AD becomes, as explained below.

By contrast, the U.S. has substantial available landfill space, and tipping fees are much lower. The Environmental Research & Education Foundation (EREF) maintains a database of landfills and their tipping rates throughout the United States[1]. According to the EREF database, in 2020 the average tipping fee for 493 landfills across the country was $53.72/ton.

In California, while landfill tipping fees are slightly higher than the low national average (compared to the EU), large amounts of the waste stream flow through transfer stations with much higher rates making the financial case for AD development better. In the San Francisco Bay area, nearly all of the major transfer stations charge higher than $100 per ton for disposal.

Where gate fees are even higher, such as in the Northeast, AD is cost competitive, and a few states in that region have also enacted legislation requiring organics collection and processing. This has led to considerable interest in the development of AD facilities.

Elsewhere across the country, tipping fees are typically lower and well below those in the EU. The combination of low tipping fees and abundant landfill space are a disincentive for organics diversion and processing.

The feedstocks that power AD facilities must also be considered. For example, is the composition of food wastes different in the EU compared to the U.S.? The simple answer is yes. In the EU, there is less food packaging and more emphasis on Extended Producer Responsibility, or EPR. In Germany, the Closed Substance Cycle and Waste Management Act (Act) was passed in 1996 requiring producers to take responsibility for end-of-life management of their products.[1] These types of EPR laws are starting to appear across the United States, as in Maine which became the first state to sign EPR legislation into law for plastics and packaging materials, with Oregon passing a similar law in August of 2021.[2] There are also less below-sink garbage disposals in the EU compared to the United States, so a higher percentage of food waste enters the collected waste stream. Collection and post-collection practices (i.e., a larger percentage of separate color-coded containers for food waste are found in Germany vs. the U.S.) may also vary.

As it relates to feedstocks, a measurable difference between the EU and U.S. waste streams is the level of contamination in the organics stream itself. Source-separated organic waste streams in the EU are generally cleaner than within the U.S. due to better understanding and participation among generators, a result of 20 years of practice.

Another important consideration when discussing the benefits of AD is the presence (or lack thereof) of Waste-to-energy (WTE) facilities. In most areas of the EU, solid refuse fuel (SRF) is a valuable product derived from organic waste that cannot be digested or composted. Biodegradable materials that do not make it into the organics stream for composting or AD can be converted to SRF and have a positive commercial value. With only about 71 WTE facilities in operation in the U.S.[3] and particularly in California (which only has two), those materials will almost always be disposed into a landfill and therefore have a negative commercial value.

Economic feasibility is the primary factor behind the discrepancy between the development of AD facilities in the EU and the U.S. Tip fees needed to cover the costs to develop and operate AD facilities can be competitive compared to the high landfill tipping fees throughout the EU. Lower landfill tipping fees as well as lower energy costs in the U.S. make it financially difficult to develop AD facilities without enforceable regulatory requirements and financial incentives.

In the EU, AD markets are driven in part by government policies that have not been in existence in the U.S. This includes high electricity prices for renewable electricity driven by feed-in tariffs.[1] Development and implementation of AD in the EU, which for the most part is 20 years ahead of the U.S., required government foresight and intervention. Due to market factors such as high fuel and landfill costs, the business case for AD is much stronger in the EU than in the United States. The driver for incentives and regulatory mandates includes the many environmental benefits of AD.

One of the most important environmental benefits is the ability of an AD facility to significantly reduce or eliminate greenhouse gas emissions. By capturing methane gas that would have otherwise been emitted into the atmosphere, AD facilities displace fossil fuels that contribute to climate change. A secondary benefit is the production and sale of beneficial end use products and applications.

Strong regulatory mandates for organics diversion from landfills, such as those being implemented pursuant to SB 1383 in California, coupled with government funding and financial incentives and/or tariffs for renewable energy are what is needed in the U.S. to try replicating the advancement of AD development in the EU.  Similar government intervention and incentives have been gaining traction in the U.S. with increased attention on climate change, and while there are features of the AD industry in Europe that we cannot expect to duplicate in the U.S., much can be learned and emulated, and the demand for AD will continue to grow and provide those benefits here.

James Miller is the CEO of JR Miller & Associates. He can be reached at [email protected].

Jim is one of the Featured Speakers at the Organics Recycling Conference & Food Recovery Forum at WasteExpo, May 9-12, Las Vegas. For more information on the conference programs click here.

Editor's note: Part one of this series on anaerobic digestion focuses on background, regulations and incentives. Part two covers historic and current market factors in the EU, feedstocks and the influence of waste-to-energy.

[10] Is Waste to Energy Set to Increase in the Coming Years? | AltEnergyMag