Comparison of Anaerobic Digestion in the EU vs. the U.S. - Part One 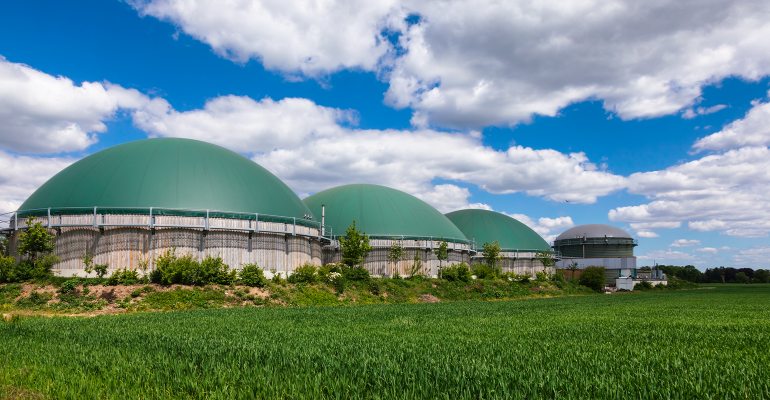 Editor's note: Part one of this series on anaerobic digestion focuses on background, regulations and incentives. Part two covers historic and current market factors in the EU, feedstocks and the influence of waste-to-energy.

For more than 20 years, Anaerobic Digestion (AD) has been successfully employed throughout the European Union (EU) to convert organic wastes -- primarily food waste, green waste, crop residuals, and agricultural wastes -- into energy and useful end products such as compost and soil amendments. For those not familiar with AD, it is the process of using bacteria to break down organic materials (such as food waste and green waste) into biogas and fertilizers within an oxygen-free environment. The resulting biogas can be captured and processed into renewable gases like methane and used as a clean power source. Digestate, or the solid and liquid residuals after the organics are processed, is also formed. The solid digestate can be composted after the addition of bulking material such as green waste has been added while the liquid portion contains high nutrient content and can be used as fertilizer.[1]  AD has also played a critical role in reducing greenhouse gas emissions associated with the disposal of organic materials.

In the United States (U.S.), the development of AD facilities for processing residential and commercial organic wastes is far behind the EU. However, in many areas of the U.S., growing interest in renewable energy and greenhouse gas reduction strategies implemented by states and local governments has led to a corresponding interest in AD, and momentum to develop AD is increasing.

Given these circumstances, we ask ourselves, is AD poised for significant growth in the U.S.? To help answer this question, let’s first look at the history of AD development in the EU and see how that compares to what’s occurring within the U.S.

The EU is comprised of 27 countries which vary widely in size, languages spoken, population density, climate, topography, per capita Gross Domestic Product, forms of government, and market structures. Likewise, within the U.S. individual states also vary widely in size, population density, climate, government, landfill tip fees and market structures. Given the sheer number of variables, this article will primarily focus on comparisons between Germany, which has the highest population and is one of the most advanced of the EU countries (as it relates to organics waste diversion), and California with its large population and advanced recycling and organics diversion laws.

Most recently, California passed a sweeping Senate Bill 1383 (SB 1383) which targets short-lived climate pollutants including emissions from organic wastes disposed of in landfills. Other broader comparisons between the EU and the U.S. will also be made, as appropriate.

By the end of 2016, there were approximately 17,500 AD plants[2] in the EU designed to process organic wastes. The most recent data from the German Biogas Association estimated 9,359

plants were operational in Germany in 2020[1]. Of these German plants, 218 receive and process “biowastes” from residential and commercial waste collections according to 2018 data from the federal statistics office[2]. The remainder are primarily agriculturally based.

In the U.S., there are less than 350 AD plants that process collected organic wastes or agricultural residuals. California has 15 AD facilities[3] (including wastewater treatment plants) that accept organics from the municipal waste stream and 33 agricultural-based AD facilities.[4] These numbers are expected to increase due to the implementation of SB 1383.

The EU Landfill Directive, more formally known as Council Directive 1999/31/EC of April 26, 1999, established goals for diversion of biodegradable municipal waste from landfills. These goals included a 35% reduction (by weight) by the year 2014 from 1995 disposal levels. Commercially viable solutions for diversion of biodegradable materials include composting and AD. Compared to composting, AD has higher costs (both in construction and operations) but has the benefit of producing clean energy and heat, providing increased value to EU countries that may import most or all their fossil fuels.

In 2007, California passed its Global Warming Solutions Act (Assembly Bill 32), which mandates a 40% reduction of greenhouse gas emissions from 1990 levels by 2040. This led to the subsequent passage in 2016 of SB 1383 which is one of the first regulations in the US that mandates and enforces that organic materials be collected, recovered, and recycled into new end-products like compost and biofuels.  SB 1383 established targets to achieve a 75% reduction in the level of the statewide disposal of organic wastes from the 2014 level by the year 2025.

This time gap between enactment of the EU Landfill Directive and SB 1383 has given the EU and its member countries a 20-year head start compared to California. During that time in Europe, collection systems, public education, processing technology, and end markets have been developed and matured. Public acceptance and survival of the fittest has determined which systems and technologies are the most commercially viable, successful, and sustainable.

Clearly, California and the U.S. have some catching up to do to be on par with the EU and Germany. Although we may be behind, we can still learn and benefit from the collective experiences in Europe. The good news is that for the most part, AD facilities currently operating within the U.S. have proven technologies and systems in place primarily due to transfer of technologies from the EU. In addition, the U.S. is farther up the learning curve for identifying and adopting successful and sustainable solutions than the EU when they were in a comparable stage of development. As a result, our path forward should be less painful and costly.

Many EU countries established financial incentives for the production of renewable energy that made the economics of AD development feasible. An example of this is the German Renewable Energy Act (EEG), which came into effect on April 1, 2000, and has been modified several times since. The EEG established feed-in tariffs that, along with other incentives, established artificially higher prices for the sale of electricity. Due to governmental financial incentives, electricity could be sold for as much as 22.5¢ per kWh, sufficient to attract widespread investor interest in the development and operation of AD plants. It’s important to note that in 2014, these incentives were reduced, and the result was a significant reduction in the development of new AD facilities.

Prices for electricity generated from AD in the U.S. have historically been far less than in the EU and have not provided comparable incentive for the development of AD projects. However, the financial picture is quite different for producing renewable natural gas (RNG). Recent projects in California are producing RNG and injecting it into the public utility grid. With incentives such as EPA’s Renewable Fuel Standards and California’s Low Carbon Fuel Standard, the resulting revenues are considerably higher than for electricity sales. These incentives lead to a much stronger business case for biogas production, and if they remain in place and are supported by states and local governments, the long-term growth for AD projects in the U.S. will be comparably strong.

James Miller is the CEO of JR Miller & Associates. He can be reached at [email protected]. Jim is one of the Featured Speakers at the Organics Recycling Conference & Food Recovery Forum at WasteExpo, May 9-12, Las Vegas. For more information on the conference programs click here.

[1] Anaerobic Digestion What is it and Who is Doing it? Prepared as part of CalRecycle contract number DRR12063.
2015 Institute for Local Government.