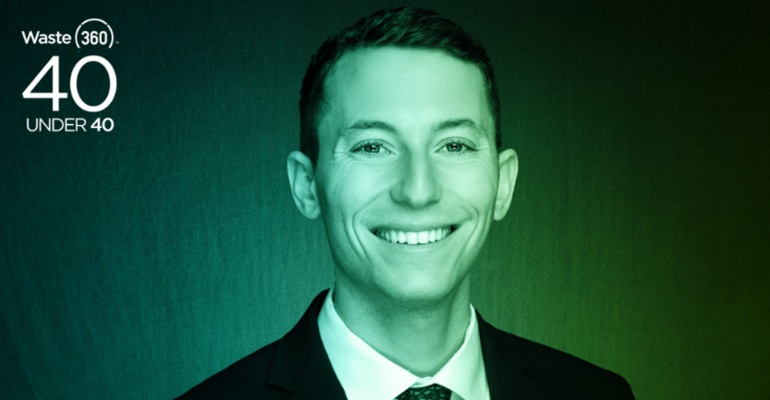 Scott Breen is an individual making major impacts in the recycling industry with numerous projects, but most notably his work with the United States trade association Can Manufacturers Institute, or CMI.

As vice president of sustainability, Breen plays a large role in advancing the current state of aluminum and steel recycling.

Working with can producers, recyclers, and product fillers alike, his work is built around a goal of increasing the rate that metal cans are properly recycled into new products. With major transformations to the layout of the organization’s goals, Breen is excited to share his work.

In this Q&A, the Waste360 40 Under 40 award winner Scott Breen tells us about the work that goes into CMI and just why the efforts are crucial to recycling.

Waste360: What exactly is your job title and what does the position entail?

Breen:  In my role as vice president of sustainability, I lead CMI's efforts in increasing the recycling rate and communicating the metal can’s sustainability advantages, and I also support CMI’s efforts to engage lawmakers and regulators on the industry’s sustainability stories so they take that into account when they write laws, promulgate regulations, and review public policy.

My job involves a lot of partnerships, communications, policy, and advocacy, and part of the reason I love it, in addition to being able to represent a material that has a fantastic sustainability and recycling story, is that it's very varied. What I do each day varies quite a bit, and it keeps things interesting.

Waste360: What does it look like when you clock into work every day?

I also do a lot of project management for the research, recycling activations, and initiatives CMI has going on. This means I'm meeting with consultants and partners. I'm sitting in on webinars and meetings.

I also do member services. I'm meeting with members, answering their questions, running committee meetings, filling them in on the latest of what we're doing and what we're seeing in general, because we have a nice spot being here in DC to tell them what's going on at the federal level. We also have the ability to zoom out and look at the whole landscape, whereas they might be focused on their individual business. That's the variety of stuff going on in the typical day.

Waste360: What was the process of getting to your position now like?

Breen: I wish I could tell you that since I was 10 years old I wanted to be the vp of sustainability at CMI, but I didn't have that master plan.

I practiced law for a couple years afterward, working at the National Oceanic and Atmospheric Administration, a federal agency. I very much enjoyed that work. It's an important mission, but I realized that as an attorney you're doing that reading and writing I was talking about earlier, but you also only come in when there's a legal problem. And I wanted to come in and create new initiatives, new partnerships that create impact. So I said to myself: “well, I want to make that transition.” So I took the leap to the U.S. Chamber of Commerce Foundation where I helped with their sustainability and circular economy program. And then I was able to lead their recycling initiative, which gave me the substantive background on recycling.

About five or six years ago, I started a podcast called Sustainability Defined where we define sustainability one concept and one bad joke at a time. We produce episodes once a month that have thousands of listeners all over the world and all 50 states.

When this job came up, I was very fortunate to be considered and I pinch myself every day that I have this opportunity because it perfectly rolls up all of the things I've been working on.

Waste360: What is a project where you were able to directly see the impact you are making?

It's going to be hard to get from the aluminum beverage can’s 45 percent recycling rate in 2020, to 70 percent by 2030 – that's our most near-term goal. If in 2020 the aluminum beverage can recycling rate had gotten to 70 percent, that would have meant 25.6 billion more cans recycled. Somehow, we need to catalyze change that allows us to get the cans we are already getting recycled, plus 25.6 million more. Not to mention the industry plans to manufacture more in the coming years.

This is going to be difficult, but we put out in this roadmap, not only the history of how the aluminum beverage can was made to help solve the litter problem, but also how CMI members have invested in recycling for many years, how the aluminum can became the most recycled beverage container in the United States, and then lastly, how CMI and its members are going to reach these new heights. We talk about deposits, increasing household and away from home recycling, improving sortation at MRFs (Material Recovery Facilities), and helping people better understand the aluminum can’s sustainable advantages. Those are the four pillars of action.

So now that we’ve got this nice framework, that’ll give us something to really focus on for years to come – and we’ve already done work within them. One thing I’m proud of is on the deposits front, where late last year we put out a couple pieces of thought leadership on the issue.

One of those pieces was with Reloop, an international circular economy nonprofit and an advocacy organization, US PIRG, calling for a national deposit system. So taking it a step even further, not only do CMI members support deposits generally, but CMI is saying it wants to see a national deposit system, and it’s working with these groups that aren’t industry – advocacy organization, circular economy nonprofit – to see this come to fruition.

Another thing I’m proud of is the work CMI members have done in that proper sortation at MRFs pillar. We went about this really methodically; my predecessor wrote a nice article about the issue. And then when I came on board, CMI did a pretty big piece of research with the consultant, Gershman, Brickner and Bratton (GBB), where they talked about the value of aluminum beverage cans and how they continually get missorted. Up to one in every four beverage cans are missorted at a typical MRF. I mean that’s worst case scenario, but that’s a lot of aluminum beverage cans that were put in a recycling bin, we hauled in the MRF, and then were missorted.

We had the article; we had the research, and then with funding from beverage can makers Ardagh and Crown, we worked with The Recycling Partnership to give out grants for can capture equipment that would capture some of these missorted cans to make sure they get recycled. We gave out five grants last year.

The equipment that those grants are going to fund across five MRFs is going to capture 71 million cans a year. When those cans are sold, that’s more than $1 million in revenue. That’s very tangible impact, right? And then we said: “Well, how do we build on this?”

A couple of weeks ago, CMI announced a new financing option. We still want to give out grants to those that need that, but we’re also trying to give out leases. What we’re saying is, we will pay the upfront cost of the equipment, you pay us back over time with some portion of the revenue of the cans captured with that equipment – we’re not going to charge interest or anything – and then you keep the equipment when you’re done.

I’m pretty proud of the fact that I have led the effort to develop this framework. We have these goals. We have a detailed road map, with activities already falling within the pillars and we’re going to do more in each of them too.

Waste360: What is it that drives you to do the work that you’re doing?

Breen: Not only is it nice working for a material that has the highest recycling rates among beverage and food containers, but for me the economic and environmental impact of recycling additional metal cans adds up so quickly. It motivates me to try to figure out how we can get even more of these metal cans recycled. Even when I go on runs here in Washington, DC, I’m picking up just the beverage cans left on the ground because I know that those have the biggest impact, and I know that those are the most likely to turn into another can, which will turn into another thing that can be recycled. That motivates me.

Another thing I love is putting together initiatives. I am passionate about finding all of the right parties to bring together for a program I set up and doing so in a way that everyone feels like they're playing their role – that they see how this is going to make a difference and how we're going to get there. I enjoy keeping everyone together. That is also really motivating to me.

The metal can industry makes a lot of cans, employs a lot of people, and provides a package that a lot of people depend on, but we can only do so much alone. If you look at the things we've done like the grant program through The Recycling Partnership, the aerosol recycling initiative with the Household and Commercial Products Association, the deposits thought leadership that I've mentioned, you’ll see we're trying to work with a lot of different organizations, and yes that can make things more complicated, but it's worth it at the end of the day because that means that we've got more voices and perspectives helping us figure this out in order to get more of these metal cans recycled, which is going to benefit the environment and the economy. It's super motivating.