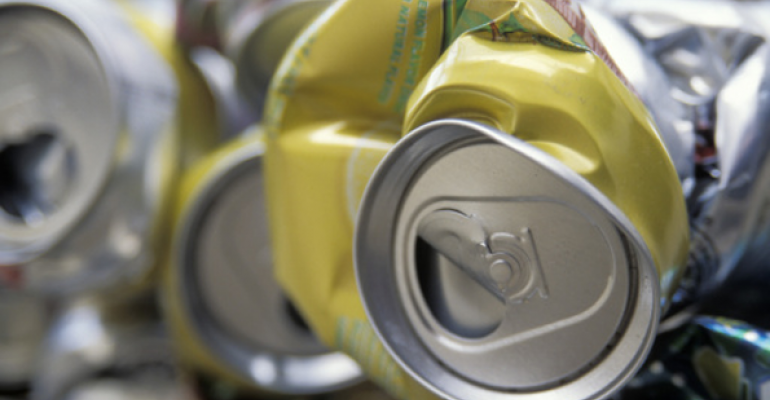 The U.S. recycles 43% of its aluminum cans, while the industry has set a global goal of 90% by 2030. Hitting that target in eight years sounds like a leap, but is it doable? And what would be the payback?

The U.S. recycles 43% of its aluminum cans, while the industry has set a global goal of 90% by 2030. Hitting that target in eight years sounds like a leap, but is it doable? And what would be the payback?

Mega aluminum beverage container manufacturer Ball Corporation seems to think it’s possible, and worth the effort. A 90% recycling rate would generate $6.6B in the U.S.; divert 1.3M tons of aluminum from landfills; and cut greenhouse gas emissions (GGE) by 12.1M metric tons of CO2 equivalent a year, according to a 2022 report the corporation released with consultant Resource Recycling Systems.

Ball is leading a share of the effort to increase postconsumer aluminum recycling, focusing on partnerships to jumpstart a closed loop system to recover more used cans to make into new ones.

“It’s impossible for us to get the industry to 90 percent by ourselves. Reaching for this target means working with our customers who are some of the largest food and beverage companies in the world. It means working with our suppliers. And investing in infrastructure to make sure packaging collected is in fact recycled, because those two are not synonymous,” says Sara Axelrod, director of Sustainability, Beverage Packaging North and Central America at Ball Corporation.

What the industry has going for it is that aluminum containers are considered the easiest to recycle.  They’re more durable than paper or plastic, and they’re made of one material, unlike plastic containers with the bottle, label, and lid made of different ones.

There’s also money in this commodity, so materials recovery facilities and dealers are incentivized to collect it when they can.

“It’s actually a self-funding recycling system. In fact, due to its value, aluminum pays for other recyclable materials in the stream. And it’s easy to sort. So, what’s collected for the most part ends up recycled,” Axelrod says.

Ball doesn’t know just how much of its own aluminum is recycled beyond within its own plants, where most scrap is reused.

But Axelrod can talk about quantity when it comes to recycled content.

“We set a goal of 85 percent recycled content in our operations by 2030,” she says, explaining the main ambition is to rely less on the carbon-intensive process of mining for bauxite to make metal from scratch, which contributes largely to its Scope 3 emissions (related to activities from assets it does not own or control but that it indirectly impacts in its value chain).

Ball’s Scope 3 emissions have climbed, driven by the production of almost 10 billion more cans in 2021 than in 2020.

“So, increasing recycled content will be exceptionally important. This will have a tremendous impact on carbon emissions of our packaging,” Axelrod says.

Ball is tapping into sports and entertainment venues to recover more postconsumer material, leveraging them to create closed loop environments.

Kroenke Sports and Entertainment is among its partners, with three of its venues set as stages to eliminate all plastic beverage containers, replace them with aluminum bottles, cans, and Ball’s new, lightweight aluminum cups made from 90% recycled content. The plan is to get the  material back into production.

Pilots have taken place at SoFi Stadium, home to the Rams; Emirates Stadium in the U.K.; and Ball Arena in Denver. The latter location has eliminated more than 595,000 single-use plastic cups and bottles and is on pace to purge more than 1 million of them in 2022.

Embedding education into the fan experience to engage them is part of the initiative. Spectators watch videos and play games to learn the benefits of recycling aluminum drink containers.

Ball has a similar partnership with Sodexo Live! and is expanding that collaboration, after introducing the new aluminum cups at Super Bowl LIVE at Hard Rock Stadium in Miami.

Sodexo Live! has since added three venues where it sells the new aluminum cups: Lucas Oil Stadium in Indianapolis, T-Mobile Park in Seattle, and First Bank Amphitheatre in Nashville, with plans to bring more of them to other locations across the U.S. and Canada.

“We are gradually building up our efforts together, as we continue to look for new innovative ways to help make our partner venues sustainable, and in an exciting, engaging way,” says Molly Crouch, corporate director of Sustainability for Sodexo Live!

“Eco-conscious efforts have to be at the forefront of events, especially events of such a large scale … sports move the needle for consumer behaviors, so it’s crucial that our efforts at these venues are rooted in reducing our carbon footprint. This sets the example for everyone to follow,” she says.

“The venues have been a great showcase for our new cup. But we are also improving recycling infrastructure and reducing contamination, which means we get a clean stream of aluminum that’s more valuable. We get it to metal scrap dealers to sell it back to our suppliers, and ultimately back into more Ball cans, cups, and bottles,” Axelrod says.

The roughly 60-day process entails collecting the containers, sorting them into bales at a materials recovery facility, sending them on to a broker who sells the aluminum to a remelt and rolling facility to turn into can sheet, sold back to Ball.

Looking beyond downstream initiatives to narrow its carbon footprint; Ball pledged to reach for net zero carbon emissions across its value chain (beyond its own operations) before 2050. An intermediate target is to reduce absolute emissions from its own operations by 55% by 2030.

Energy consumption will be a main avenue, including work toward 100% renewable electricity globally by 2030.

“This is a huge factor when we talk about reducing emissions in our direct operations,” Axelrod says, noting that through Ball’s wind agreements it sourced 44% of global electricity from renewables, reducing nearly 409,000 metric tons of GGE in 2021 compared to the previous year.

Ball also invested in energy monitoring across its beverage manufacturing plants, as well as artificial intelligence to make predictive decisions based on the data. And it’s exploring electrification of ovens used in can making. The ultimate goal is to improve energy efficiency by 30% (2020-2030).

So, it’s about what happens along the material’s whole path, Axelrod says.

“We don’t feel our responsibility for this packaging ends when it leaves our factories. We’re committed to creating a circular economy within the aluminum industry, and decarbonizing the entire value chain is fundamental to this work. We work with our supply chain partners to ensure that the products we put into the universe are sustainable, and we want to make sure we get them back.”